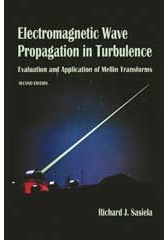 At first glance, Mellin transforms can look formidable and complicated. With this book, Dr. Richard Sasiela invites readers to overcome these fears and see just how useful they can be.

The book is aimed at two audiences: those interested in problems surrounding electromagnetic wave propagation in turbulence, and those interested in evaluating integrals. The author takes a systematic and in-depth approach to answering both audiences, separately and jointly, by demonstrating a way to obtain analytic answers, the integration method, and by developing a way to express solutions to electromagnetic wave propagation in turbulence problems in integral form. The book also demonstrates how Mellin transform techniques can be used to evaluate these integrals.

This book touches on how Mellin transforms can be used in applications relating to image, radar, and acoustic processing, as well as chaos and fractal theory.

The author has thoroughly updated this second edition and corrects some of his earlier work using new information and new technologies. He has also added new information on Strehl ratios and their different applications.

Preface to the first edition

This book is directed at two audiences: those interested in problems of electromagnetic wave propagation in turbulence and those interested in evaluating integrals. For the first group, the text provides a systematic way to obtain analytic answers to problems in which the scintillation is small and there are no nonlinear effects due to high optical powers. For those interested in evaluating integrals, the integration method is explained in separate chapters. In the chapters containing examples of wave propagation in turbulence, the problem is quickly reduced to one of evaluating an integral, and can be viewed as examples of the integration technique.

To address these two audiences, this book develops a systematic way of expressing solutions to problems of electromagnetic wave propagation in turbulence in integral form. It also develops Mellin transform techniques that are used to evaluate these integrals. This technique has three major advantages over others: 1) it is applicable to a wide range of problems; 2) the application of the technique is straightforward; and 3) the answers are expressed in analytic form.

Mellin transform and hypergeometric functions have been a scientific backwater and are used regularly by only a few people. That is a shame for several reasons. Mellin transforms allow a deeper understanding of infinite series. Knowing the Mellin transform of a function is tantamount to knowing its infinite series. Mellin transform techniques, which require an understanding of hypergeometric functions, enable one to deepen his or her understanding of elementary and transcendental functions. In addition to this pedantic usefulness, it is a natural way to solve several types of problems that have wide applicability. For instance, Mellin transforms permit one to perform integrations that are very difficult to perform by other means. They enable one to solve boundary value problems in spherical and cylindrical coordinates with the same ease that Fourier transform techniques afford in solving differential equations with constant coefficients. The self-similar characteristic of Mellin transforms leads to applications in image, radar and acoustic processing, and chaos and fractal theory.

The major part of this book develops and applies a method for evaluating integrals analytically and expressing the result either as infinite series or as a sum of generalized hypergeometric functions. At first look, the method to evaluate integrals is formidable, and the final results look very complicated. It has been suggested that results from a numerical integration can be obtained more quickly. One has to overcome these prejudices. It is true that the formalism is difficult to learn because it uses mathematical techniques that are generally unfamiliar to most scientists, but that was not a valid excuse for not learning other difficult techniques, which are part of a standard scientific education. If the formalism produces results that are useful, one should be willing to overcome the initial difficulty.

This technique has indeed proved to be very useful! The expressions for the power series, although lengthy to write down, are easily and quickly evaluated using the recursion relation for gamma functions. Recently several computer algebra programs have acquired the ability to evaluate generalized hypergeometric functions, to which the power series are equivalent. In this context the results are no more difficult to evaluate and plot for specific cases than results expressed in terms of more familiar functions such as sinusoids and exponentials. The analytic form of the answer uncovers the natural parameters of a problem and gives one insight into how important a parameter is - an insight that is difficult to develop with numerical techniques. Integrands that contain the difference of two almost equal quantities, a condition that leads to difficulties in numerical integration, are handled in the complex plane by simply deforming an integration path past a pole. Because the technique is algorithmically based, one can develop a computer algebra program that automatically evaluates these integrals, in which case the user would not need to learn the details of the technique to get an analytic answer and to generate curves for specific ranges of parameter values. The development of such a program is being investigated. Just as scientific calculators made tables of trigonometric functions and logarithms obsolete, such a computer program would do the same to most material in integral tables.

It would also allow one to evaluate many integrals that are not in the integral tables. This technique was originally developed to evaluate integrals one encounters when solving problems of electromagnetic wave propagation in turbulence. The technique enables one to solve problems in terms of integrals that are generated with filter functions that multiply the turbulence spectrum. Problems that take days to solve when one starts from first principles can often be solved in less than an hour with appropriate filter functions and Mellin transform techniques.

The techniques given in this book were developed over several years in the high- energy beam-control and propagation group at MIT Lincoln Laboratory. I would like to thank MIT Lincoln Laboratory for providing the opportunity to work on challenging problems for which this technique was developed, for the freedom to pursue research in this area, and for the chance to interact with people interested in helping to develop this technique. This work was sponsored by the Strategic Defense Initiative through the Department of the Air Force under Contract No. F19628-90-C-0002.

I chose to solve many of the problems to illustrate the method developed in this book. I did not do a comprehensive literature search to see if these problems were previously solved. I apologize if I have left out relevant references.

Several people provided ideas that enabled me to develop the technique. Lee Bradley first suggested the possible usefulness of Mellin transform techniques and the existence of the Marichev text. He also suggested the use of Gegenbauer polynomials in addressing the anisoplanatism problem. The technique of evaluating integrals in several complex planes was developed in collaboration with John Shelton.

Many people had a hand in suggesting what material to include, and how it should be organized. I would like to especially thank Jonathan Shonfeld for carefully reading the first draft and suggesting many organizational changes. I have had many suggestions from Robert Kramer, Hernan Praddaude, Ronald Parenti, and Charles Primmerman. Fred Knight was very helpful in converting the text into LATEX. Jim Eggert was particularly helpful since he was willing to read the text during several stages of the evolution of this book and made many useful suggestions. The series editor Professor Hermann Haus and the Springer-Verlag editor Helmut Lotsch made helpful suggestions on how the material should be presented. I want to thank Bill Breen, Ed Sullivan, Dave Tuells, Kevin Walsh, and their staff for producing the figures, converting them into Postscript, and printing the final copy. Sue Richardson and Katharine Krozel provided useful editorial help.

A book like this that contains so much new material and has so many complicated equations is very difficult to make error free. I would appreciate hearing any comments you have on the material or errors you have found in the text. My E-mail address is Sasiela@ll.mit.edu. Writing a book takes a tremendous investment in time and energy that is no longer available for home life. I thank my wife Joan for being so understanding during this period.

Comments about the second edition:

The first edition was published by Springer-Verlag. This edition corrects typographical errors in that edition. The treatment of tilt of uncollimated beams was incorrect in Sections 4.5, and 4.6 because a gamma that should have multiplied the diameter was missing. It was pointed out by Jan Herrmann that it was necessary to use the local tilt in these sections.

As pointed out by Byron Zollars, there were some internal inconsistencies with 2-pi factors in the development of the general formula for variance due to turbulence. This affected some intermediate formulas in Chapters 2 and 3.

Since the propagation of focused beams has become more important, this case has been treated more carefully and extensively. The derivation of the basic equations for variance and the removal of Zernike terms is developed more carefully.

Chapter 6 of the original book discussed other uses for Mellin transforms. This chapter was not needed for the development of the subsequent chapters. Since I have nothing new to add on this subject, the chapter was eliminated because of the additional topics that were addressed.

I want to thank Ronald Parenti who I have worked with on turbulence problems for over 30 years. Our recent collaboration with Professors Larry Andrews and Ronald Philips has been very productive.

Recent computer code results indicate that the calculation of the scintillation for finite beams based on Rytov theory is in error. The beam wave theory predicts a dip in the scintillation index for Fresnel number around unity. Code results predict a smaller dip. Apparently, the perturbation theory that starts with a diffraction-limited beam on axis is incorrect. In the region of error the tilt can be comparable to the beam diameter. In addition, the focus term caused by turbulence causes a change in beam size, which violates the diffraction-limited assumption. Various authors have corrected the Rytov scintillation by separately including the effects of jitter and beam spreading.

I want to thank Seth Trotz for solving the many problems encountered in converting this document into LATEX2e. Also, I want to thank Eric P. Magee and his students for pointing out errors in the draft copy of this edition.

Beth Huetter of SPIE helped to correct errors and produce a uniform format.

This work was sponsored by the Department of the Air Force under Air Force Contract FA8721-05-C-0002. Opinions, interpretations, conclusions, and recommendations are those of the author and are not necessarily endorsed by the United States Government.