Within minutes of the first of two deadly earthquakes that devastated Nepal this spring, photonics technologies from satellites to smartphones focused on the destruction to provide life-saving data to disaster response teams.

The two massive earthquakes, a magnitude-7.8 quake on 25 April followed by a magnitude-7.3 on 12 May, combined with tremors and aftershocks, killed more than 8500 people and injured at least 21,000.

Immediately after the first earthquake, the Global Disaster Alert and Coordination System, a joint UN and European Commission initiative, instructed the UN satellite imagery program, UNOSAT, and its partners to start mapping the region.

Under the International Charter on Space and Major Disasters, myriad satellite-related organizations acquired images of priority regions that UNOSAT swiftly integrated into a web map. US-based commercial satellite operator DigitalGlobe played a key role in the rapid-mapping effort and released its own imagery of affected areas to all response and recovery efforts.

“The morning after the earthquake struck, we were able to capture imagery across the devastated regions using [several] of our satellites,” said Georgios Ouzounis, a DigitalGlobe scientist who designs and develops advanced algorithms and methods for satellite and aerial image processing.

“The areas of Nepal affected by the earthquake were within our most recently launched WorldView-3 satellite’s field of view, during one of its 15 orbits around Earth,” Ouzounis said.

Static imagery of this region, some 13km by 13km in area, was collected and pieced together to produce longer strips as the satellite moved along its orbit, he explained. DigitalGlobe’s satellite can collect imagery over 680,000 sq km every day, producing images with a resolution as high as 30cm.

Satellite imagery from around the world is also being used to pinpoint areas at greatest risk from future earthquakes. The European Space Agency, for one, has produced interferograms from data captured by its radar satellite, Sentinel-1A, that reveal ground movement across Nepal and will assist in future disaster planning.

The imagery acquired before and after the earthquake has been combined to produce interference patterns that researchers use to quantify ground movement. These interferograms have already shown that the maximum land deformation following the earthquake was only 17km from Nepal’s capital, Kathmandu, explaining the extensive damage in this area.

Sentinel and other radar satellites are being used for continuous mapping, said Tim Wright, a professor at Leeds University (UK) who works with ESA as part of the Earthquakes without Frontiers project.

“We can relate this information to what happened in the earthquake and work out which bits of fault slipped and, equally importantly, which bits didn’t slip and have the potential to fail in future earthquakes,” Wright said.

Two Sentinel-1A scans over Kathmandu, Nepal, before and after the 25 April earthquake, generated an interferogram that reveals ground movement. Each fringe of color represents about 3 cm of deformation. The large amount of fringes indicates a large deformation pattern with ground motions of 1 m or more.
Copyright ESA, DLR Microwaves and Radar Institute, GFZ, e-GEOS, INGV-ESA SEOM INSARAP study
RADAR MEASUREMENTS PLUS GPS

While satellite imagery is critical in relief efforts, other sources of data are becoming increasingly important as well. As part of his ESA efforts, Wright has been working with Jean-Philippe Avouac, a professor at University of Cambridge’s Earth Systems Sciences doctoral training program (UK), to combine radar satellite measurements with GPS data as well as general seismic observations.

With the combined data, the researchers can better understand the physics of Nepal’s earthquakes and model what’s happened below the Earth’s surface to assess future potential earthquakes.

“GPS [data] provides a time history of events. So you can, in principle, track measurements every second or even more frequently,” Wright said. “This really helps us to nail down the temporal evolution [of post-seismic motion] particularly in the first few days between the earthquake and first radar acquisition.”

Similarly, researchers from California Institute of Technology (Caltech) and NASA Jet Propulsion Laboratory (JPL) have combined satellite radar imaging data with GPS data and worldwide seismic observations to estimate the slippage of the geologic fault beneath Nepal. The research forms part of the Advanced Rapid Imaging and Analysis (ARIA) project and will provide tools and data for relief groups.

Mark Simons, a professor of Geophysics at Caltech, predicted that within five years, this type of information “will be available within hours of a disaster, resulting in an ability to save more lives.”

Drone footage has also proven critical to relief efforts in Nepal. Images from these unmanned aerial vehicles (UAVs) were among the first to reveal the post-earthquake devastation and have helped responders pinpoint where aid is needed. 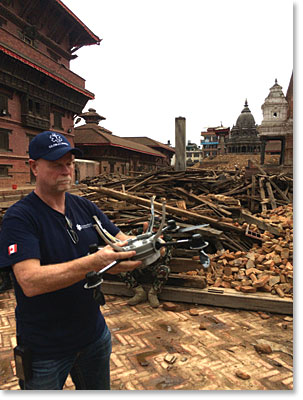 Aeryon Labs (Waterloo, Canada) has supported Canada-based GlobalMedic by supplying three small, unmanned aerial systems and a flight engineer to capture aerial photography and live videography for detailed mapping of disaster zones. According to Aeryon, infrared cameras capture images close to the ground, enabling operators to locate a human face some 300m into the distance.

But while satellite images, GPS data, aerial imagery, and other tools have helped to save lives across Nepal, crowdsourcing has played a massive part in recovery and rescue missions. Soon after the quake, DigitalGlobe activated Tomnod, a crowdsourcing platform that allows online volunteers to pore over satellite images, compare new images with old, and tag damaged infrastructure.

More than 30,000 volunteers used the platform within the first month, according to Ouzounis of DigitalGlobe, resulting in the cataloguing of thousands of damaged roads, buildings, and areas of major destruction.

Because the volumes of crowdsourced data from Tomnod are so vast, it must be plugged into an algorithm that identifies frequent tag agreements to discover which areas are in need of the most help.

UNOSAT’S free smartphone app called UN-ASIGN has also been used to automatically upload to the organization’s web maps photos that have been taken by volunteers in disaster regions. These volunteer images have validated satellite imagery from Nepal as well as provided accurate details on damage in specific locations.

For its web maps, the organization has also drawn on information pouring out of the OpenStreetMap community. Thousands of OpenStreetMap volunteers worldwide have been rapidly editing satellite imagery to provide such information as the location of open spaces that could be used for helicopter landing.

A search-and-rescue technology called FINDER, for Finding Individuals for Disaster and Emergency Response, located four men trapped under some 10 feet of rubble in Nepal this spring.

Under development by the US Department of Homeland Security Science and Technology Directorate and NASA JPL, FINDER uses low-power microwave radar to detect small movements from the breathing and heartbeats of buried victims.

Unwanted data that comes into the suitcase-sized device is eliminated with sophisticated signal- processing tools, and algorithms are used to detect the variation in the instantaneous heart rate due to respiration.

People who are buried under shallow rubble are usually rescued first, according to FINDER task manager Jim Lux. “So we’re looking for people who are deeper. We’ve recently added functions to the tool, so you can detect victims that are, say, more than five but less than 15 meters away.”

Find more information, including images and video, in the SPIE Newsroom.

Do you have a question or comment about articles in our “Photonics for a Better World” series?