The non-profit One Laptop per Child with Nicholas Negroponte at the helm aims to put laptops in the hands of millions of children worldwide.
01 July 2006
Erin M. Schadt
In January 2005, MIT Media Lab chairman Nicholas Negroponte announced a bold project: laptops produced for $100 each and sold to governments of technologically underdeveloped countries that would distribute them en masse to their countries' children.
By November 2005, the One Laptop per Child (OLPC) nonprofit was in full swing, and a prototype was unveiled by Negroponte and Kofi Annan at the World Summit on the Information Society in Tunis, Tunisia.
Now, well over a year after the project's genesis, the group still has a number of challenges to overcome for an anticipated 2007 launch, but recent developments have happened swiftly. Just this May, in fact, the first working prototype of the laptop debuted at the OLPC's Seven Countries Task Force Meeting. 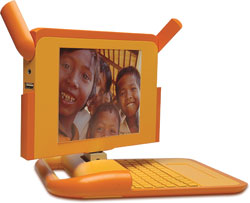 The newest prototype includes pieces that work as mesh wireless network antennae when flipped up and cover the USB and audio ports when not in use.
The machine's specs are simple. It features a dual-mode display with backlit color and frontlit black and white. The Linux-based laptop won't have a hard disk but will have a 500 MHz processor and 128MB DRAM, with 500MB flash memory, and four USB ports. Wireless broadband will allow the computers to work as a mesh network and create an ad hoc, local area network.
Though original designs featured a hand crank, testing proved this a poor power supply.
"Human power remains very important to the $100 laptop," explains Negroponte, who has left the MIT Media Lab to commit full-time to the OLPC. "What has happened is that it has moved off the laptop and onto the AC adapter. There are several reasons for this move, which probably should have happened much sooner. One is that the previous scheme introduced too many extraneous forces into the laptop itself, putting it needlessly at risk. It is also the case that, when cranking with one hand, the other hand had to spend as much or more force keeping the laptop from twisting. With human power on the AC adapter these go away. Furthermore, using your foot becomes viable, as is getting your baby brother to do it for you."
"We will have one of three human-powered options for the machine available on the power brick -- a crank, a foot treadle, or a pulley system," says Walter Bender, OLPC president of software and content.
Hardware, software, distribution, and education challenges remain for the project, however.
"Immediate [challenges] always loom greatest, but are probably the easiest," says Negroponte. "Making a $100 laptop felt hard. Making a 1W laptop is harder. Distributing 100 million is yet harder. Dealing with the educational issues will be yet harder again. Right now, making a dual-mode display is the most consuming aspect of the project."
Though the $100 laptop is a bit of a misnomer -- initial computers are expected to cost around $135 -- the more units that are sold, the more the price will come down.
"The current plan is that Phase One is seven large and diverse countries, each big enough to absorb 1 million units into their system and budget. That gives scale and gets the price down for Phase Two countries to enjoy the ride thereafter. The seven anticipated launch countries are Brazil, Argentina, Egypt, Nigeria, Thailand, India, and China. We are in discussions with each and at various stages in the agreement." He anticipates that at least five countries will commit by September.
The organization hopes to ship between five and 10 million laptops next year, according to Bender.
The OLPC acknowledges that the project doesn't end with the creation and distribution of the hardware. A large portion of the work on the laptops revolves around the development of open source software, which is being worked on with Red Hat, and the educational implications of the machines.
Negroponte stresses that the laptops are not gadgets but learning tools for both group and independent study, which brings its own set of challenges.
"The still bigger challenge is building a learning culture around the machine," says Bender. "There is not a one-size-fits-all solution -- conditions vary too much from place to place. There is a one-size-fits-all epistemology, however: you learn through doing. The initial experience with the machine for both students and teachers will be one of create and share."
"Considerable work has been and will be devoted to teachers," says Negroponte. "Not so much to have them learn what and how to teach the kids, but more in terms of their own self-confidence and comfort. Experience to date, at a scale of about 50,000 machines, has been in Maine. Many teachers in Maine -- in 2002 -- were apprehensive. Those same teachers today are nearly euphoric, in part because teaching has become so much more fun. Students are more engaged."
The OLPC is working with a number of partners on the $100 laptops. Quanta Computer Inc. in Taiwan is the original design manufacturer of the laptop, and Red Hat is the group's partner in software development. The OLPC also relies on donations from sponsor organizations, each of which have donated $2 million. These sponsors include Nortel Networks, Google, News Corporation, Advanced Micro Devices (AMD), Red Hat, Brightstar, Marvell, eBay, Quanta Computer, Chi Mei, and 3M.

For more information on the OLPC and the $100 laptops, see the organization's website at laptop.org.

How You Can Help

The $100 laptop project is truly a community effort. The project is fast-paced and organic, and one of the best ways to keep up is by visiting the project's Wikipedia site at wiki.laptop.org. An integral part of the wiki provides information on ways people can help. The types of things needed range from courseware software reviews to re-porting and/or fixing bugs to language translation.

Speaking to the optics and photonics communities, Nicholas Negroponte, founder and chairman of the OLPC, says, "We could use two things from your community specifically: 1) a field-sequential 7.2-inch, color LCD at $35, FOB factory, and 2) an SVGA projector, 100 to 200 lumens, the size of a beer can, at less than $30."
Check out the wiki for more ways you can help.
Erin M. Schadt, SPIE Professional Managing Editor
Recent News
The NewSpace revolution is democratizing access to space
Events, Technology
SPIE congratulates 2021 Physics Nobel Laureates
Community
Ken Rygler receives 2021 Bacus Lifetime Achievement award