Vivek Bakshi, editor of EUV Sources for Lithography, discusses modern advances in extreme ultraviolet lithography.
01 April 2006
Rob Whitner
No one feels the pressure to keep up with market-driven expectations more than the engineers who develop the latest semiconductor technology. Responsible for technologies that make new medical, instructional, and informational developments possible, engineers who work in the field of microlithography are indeed pioneers, making what once was considered impossible a reality.
Law of the Land
If the inherent challenges and expectations for technological development weren't enough, engineers who work in microlithography have to bear in mind an additional law of industry: Moore's Law, which states that the number of transistors on a chip will double about every two years. So the size of the transistors must shrink accordingly to allow the number of transistors on a chip of essentially the same size to double.
"This incredible shrinking of transistors and other circuit elements is achieved via continued advances and innovations in microlithography technology in which the circuit image on a mask is transferred to resist for printing of circuits on the chip," explains SPIE member Vivek Bakshi, SEMATECH (Austin, TX).
"In the past, the wavelength of the light used to print circuits was reduced from 248 nm to 193 nm, in addition to various optical tricks, to reduce the size of printed circuit elements. As the industry prepares to move to the 45-nm node, further innovations are required to continue to shrink the size of printed circuit elements. The open question is: how far we can push optical lithography? According to the ITRS (the roadmap followed by the semiconductor industry to describe the shrinking size of circuit elements according to Moore's law), EUV lithography [EUVL] is the favorite technology for the 32- and 22-nm nodes and can probably take the industry to the end of the roadmap."
EUVL is a proven lithographic technology, with microexposure tools in operation in the field today and delivery of alpha-level scanners planned this summer. The technological advantages that EUVL provides are a result of its use of a much shorter wavelength of light and its similarities to present optical lithography technology.
Bakshi explains that "unlike dry optical or immersion lithography, in which 193-nm light produced by lasers are used to print the circuits, in EUVL, 13.5-nm light, generated by hot plasma, is used to print the circuits. But the main difference is that the entire EUVL system is in a vacuum, and instead of transparent lenses, special mirrors are used as optics, since EUV light is easily absorbed."
Global Effort
Up to this point, there have been several challenges to the development of EUV lithography that have been successfully met, thanks to collaborative efforts among engineers and scientists from many disciplines around the world.
"EUVL development is a large global effort," says Bakshi. "Infrastructure for EUVL has been developed in the area of EUV source, masks, resists, optics, and metrology. Although some challenges remain in the area of resist performance, source components' lifetime, and mask defects, fundamental constraints are essentially understood, and a concerted global effort is underway to provide a commercial infrastructure to allow chipmakers to use EUVL in their leading-edge high-volume chip-making factories. The semiconductor industry remains a fiercely competitive area, but SEMATECH has created a global platform to facilitate consensus on the direction of chip making technologies and to promote joint work in the pre-competitive areas of computer chip manufacturing to counter rising R&D cost and provide savings to the industry."
Bakshi is the editor of two books focused on current and future developments in EUVL technology. Since EUV's power source has been a central challenge in developing an economical system for EUVL, the first book, EUV Sources for Lithography, is an authoritative reference for EUV source technology with 38 chapters contributed by the world's leading technical experts describing their efforts to develop EUV sources for microlithography applications. (See sidebar.)
Bakshi says the next book he is working on, EUV Lithography (SPIE Press 2007), will comprehensively "cover all components of EUVL: EUV mask, optics, resist, metrology, sources, microsteppers, scanners, and current up-to-date printing performance of EUVL."
Both texts not only explore an important emerging field in semiconductor engineering, they also represent the best efforts of a global community of scientists and engineers working together to reach a modern milestone.

Vivek Bakshi is a senior member of the Lithography Division technical staff at SEMATECH. He received his M.Sc. in physics from the Indian Institute of Technology at Kanpur, India, and a Ph.D. in physics from the University of Idaho (Moscow, ID). He is currently the project leader for the EUV source and EUV source metrology projects at SEMATECH and has managed projects in the areas of plasma etch, advanced process control, and 300-mm tool performance assessment. 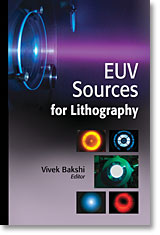 Powerful Reading
For more information on EUV sources, take a look at Bakshi's EUV Sources for Lithography, newly available from SPIE Press.
EUV Sources for Lithography presents the work of hundreds of scientists and engineers around the world. Topics range from a state-of-the-art overview and in-depth explanation of EUV source requirements, to fundamental atomic data and theoretical models of EUV sources based on discharge-produced plasmas (DPPs) and laser-produced plasmas (LPPs), to a description of prominent DPP and LPP designs and other technologies for producing EUV radiation.
Read more about the book.