The first plenary session of 2019 SPIE Optics + Photonics symposium kicked off in fine fashion yesterday evening in San Diego. Google Cloud's Massimo Mascaro, in a talk entitled "Accelerating Science: How AI and Cloud Computing Can Boost Scientific Progress," described recent successes and upcoming challenges around the upward trajectory of machine learning now that we have reached "the era of AI."

Deep learning in scientific computing, he said, is built on "connectonomics" — reconstructing neural circuits from high-resolution brain imaging — and it's working: "We now have machines that can see things better than humans can." While traditional machine learning has not been so successful, requiring a tremendous amount of human labor, deep machine learning processes raw data via a more advanced network to produce an end product — or information — much more quickly, efficiently, and autonomously. Pointing to specific examples of generative models — such as the human facial creations we've recently seen in the news — he also outlined a recent project between Google and NASA's Frontier Development Lab to process exoplanet data from the TESS and Kepler space telescopes. With three million planetary models created, the project realized 96% in terms of accurate exoplanet detection. Mascaro also described AI's recent success in learning, from historical games, to beat the human world champion of the strategic game "Go." The primary challenges at this stage? The computation requirements for AI are doubling every 3.5 months, five times faster than Moore's Law. We need to be building systems that can grow as computation grows, said Mascaro: "To improve our models, we must rethink hardware, not just software." 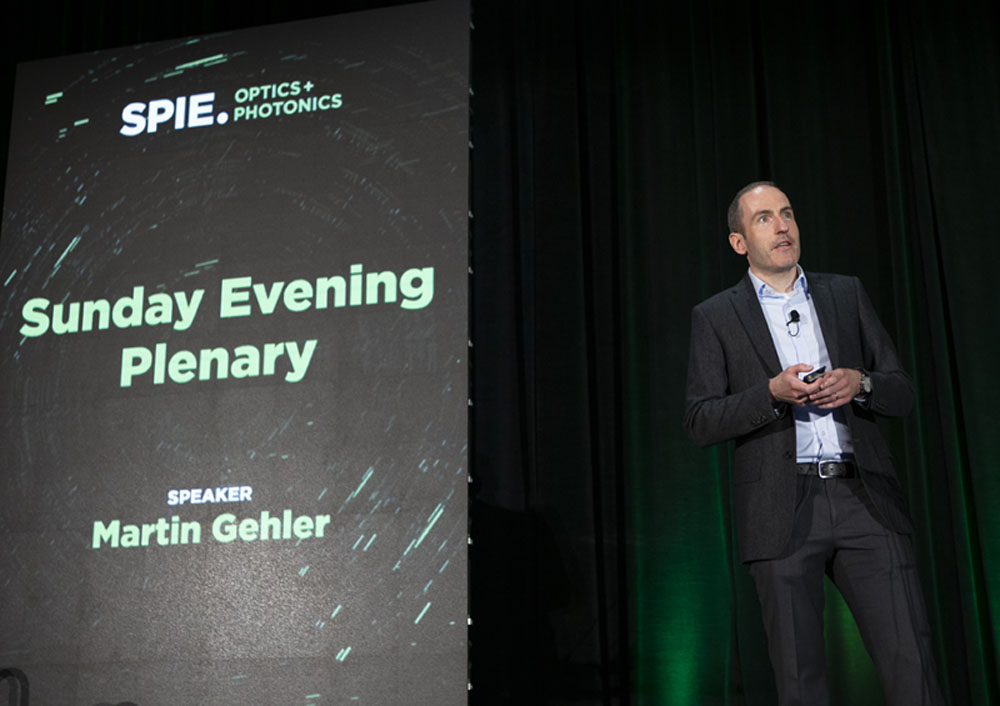 Then Martin Gehler, the study manager of the European Space Agency in France, presented "LISA: Observing Gravitational Waves from Space." The Laser Interferometer Space Antenna, an international collaboration, is a space-based gravitational wave observatory, consisting of three spacecraft in a triangular formation that will provide access to the milli-Hertz frequency band of the gravitational wave spectrum. Gehler, who is responsible for the pre-development phase of the LISA mission within the Agency's Science Program, shared the project's mission concept, details, and challenges faced by LISA, including those currently being analyzed and addressed throughout the optical metrology chain and system used for measuring gravitational waves.

Gravitational waves are ripples in the curvature of space time produced by the motion of mass and energy. Being able to see and hear with them, said Gehler, offers us "multi-messenger astronomy," which translates to new, and valuable access to the universe. In a highly detailed talk, which ranged from LISA's measurement concept — "laser beams transmitted through 30cm off-axis telescopes between spacecraft" — to its Gravitational Reference Sensor and fiber-delivered Charge Management System, Gehler offered a bird's eye view of much of the project, schematics and all. "The first idea for this mission came out in the late 80s, when I was still in school," said Gehler, as he outlined the project's formidable timeline: a mission-formulation review is scheduled for next year, with implementation projected in 2032. And it will be a while before completion: as of now, LISA's launch is not expected until 2034.