A plasmonic analog of graphene

Light propagation in honeycomb arrays of metallic nanoparticles mimics the properties of electrons in graphene, paving the way to unprecedented tunable optical materials.

Light has been the source of inspiration for artists and scientists for millennia. Assyrians developed the first lenses to bend the trajectory of light and the interaction of light with metals was exploited in Mesopotamia and Egypt to create the first mirrors. In classical optics, lenses and mirrors are used to focus light to small scales, but these do not allow the observation of microscopic structures smaller than the wavelength of light, the so-called "diffraction limit."1

To overcome this limit, plasmonic nanostructures have been created, such as isolated metallic nanoparticles.2 When light illuminates the nanoparticle (a few nanometers in size), it induces electronic motion in the metal, creating an oscillating dipole called a localized surface plasmon (LSP). The electric field at the surface of the nanoparticle associated with LSPs produces strong optical fields in the subwavelength region, overcoming the diffraction limit and allowing structures at the molecular level to be observed.3 When two or more nanoparticles, such as an ordered array, are brought in close proximity the interaction between LSPs creates collective plasmons (CPs) that extend over the whole lattice. Two-dimensional arrays of metallic nanoparticles thus allow one to trap optical fields in the transverse direction while transporting them over macroscopic distances in the plane. These artificial systems, called metasurfaces, could be exploited in a new generation of ultrathin optical circuits.

The ability to transport radiation in the metasurface and to control its propagation depends on the structure of the array and on the interactions between the LSPs in the nanoparticles. One 2D array that has attracted significant interest in recent years is the honeycomb structure exhibited by graphene, a monoatomic layer of carbon atoms. Electrons in graphene behave as the first ‘massless Dirac particles,’ relativistic particles predicted theoretically many decades ago and detected only in 2005.4, 5 Dirac particles exhibit several unique properties,6 including the ability to flow unimpeded even in the presence of impurities, which dramatically improves their mobility.

In our recent theoretical work,7 we considered a 2D honeycomb structure of metallic nanoparticles (see Figure 1) and studied the fundamental properties of CPs that can be excited by external radiation. The direct analogy between our plasmonic array and the structure of graphene gives rise to CPs sharing some of the remarkable properties of Dirac particles. Moreover, the physical response of the plasmonic array is highly tunable with the polarization of the individual LSPs. Tilting the LSP dipoles crucially modifies the strength of the interaction between the nanoparticles, which changes the fundamental nature of the CPs, including their effective mobility in the lattice. 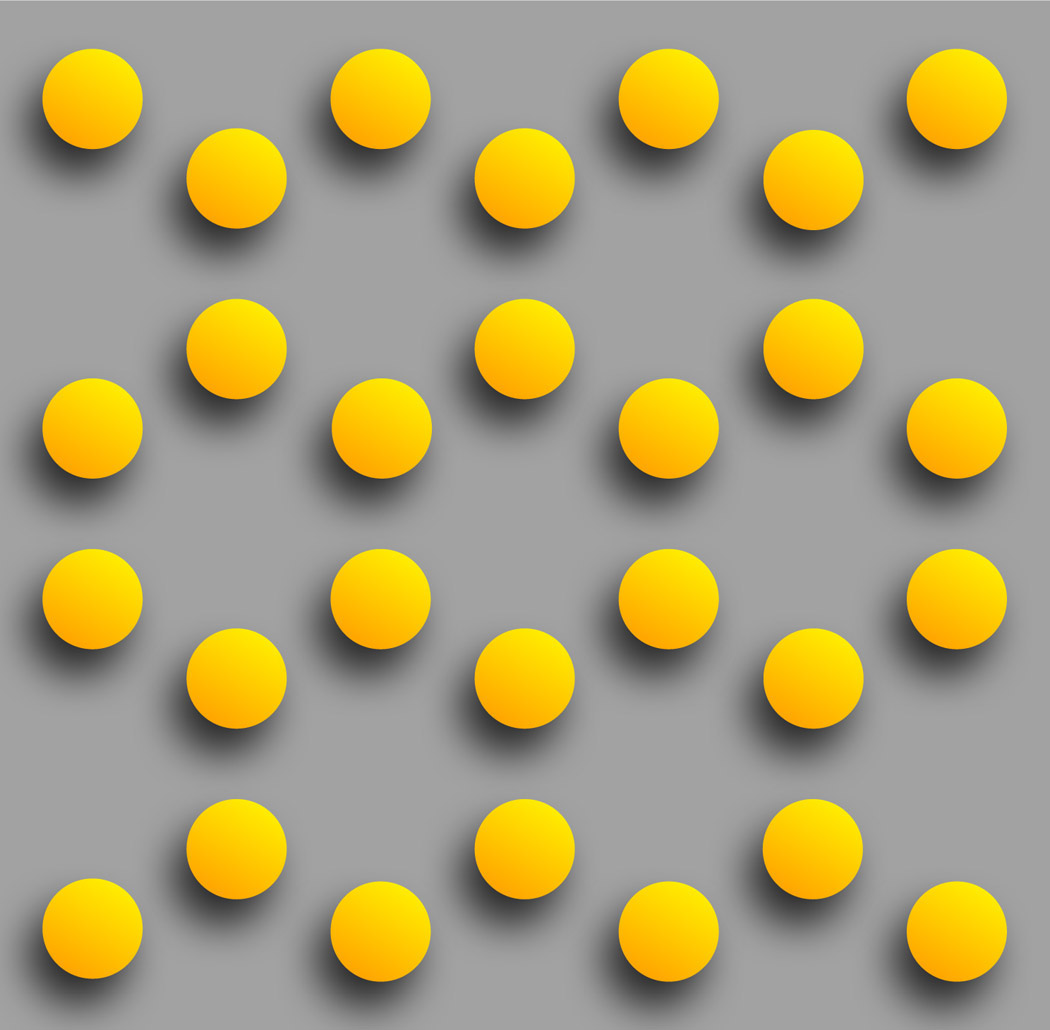 Figure 1. Sketch of a two-dimensional honeycomb array of metallic nanoparticles.

In our work we considered the problem of many dipolar LSPs (one in each nanoparticle) interacting with the neighboring ones via the dipole-dipole interaction,8 which can be tuned by tilting the polarization of the external radiation. This tunability is unique to our plasmonic system and is not available with electrons in real graphene, where the coupling between carbon atoms depends only on the distance between them.

Figure 2 illustrates the band structure of CPs when all LSP dipoles point out of the 2D plane. If we describe the direction of the dipole moments by their polar (θ) and azimuthal (ϕ) angles in the unit sphere, the figure corresponds to the θ=0 case. Figure 2 highlights the presence of special points in the reciprocal space around which the CP dispersion is conical, a typical feature revealing the presence of massless particles (such as photons). We have shown that CPs near these points in fact behave as massless Dirac particles in complete analogy to electrons in graphene and thus inherit their unique physical properties. This aspect will be vital for designing plasmonic metasurfaces with the highest efficiency in transporting radiation across the 2D plane. 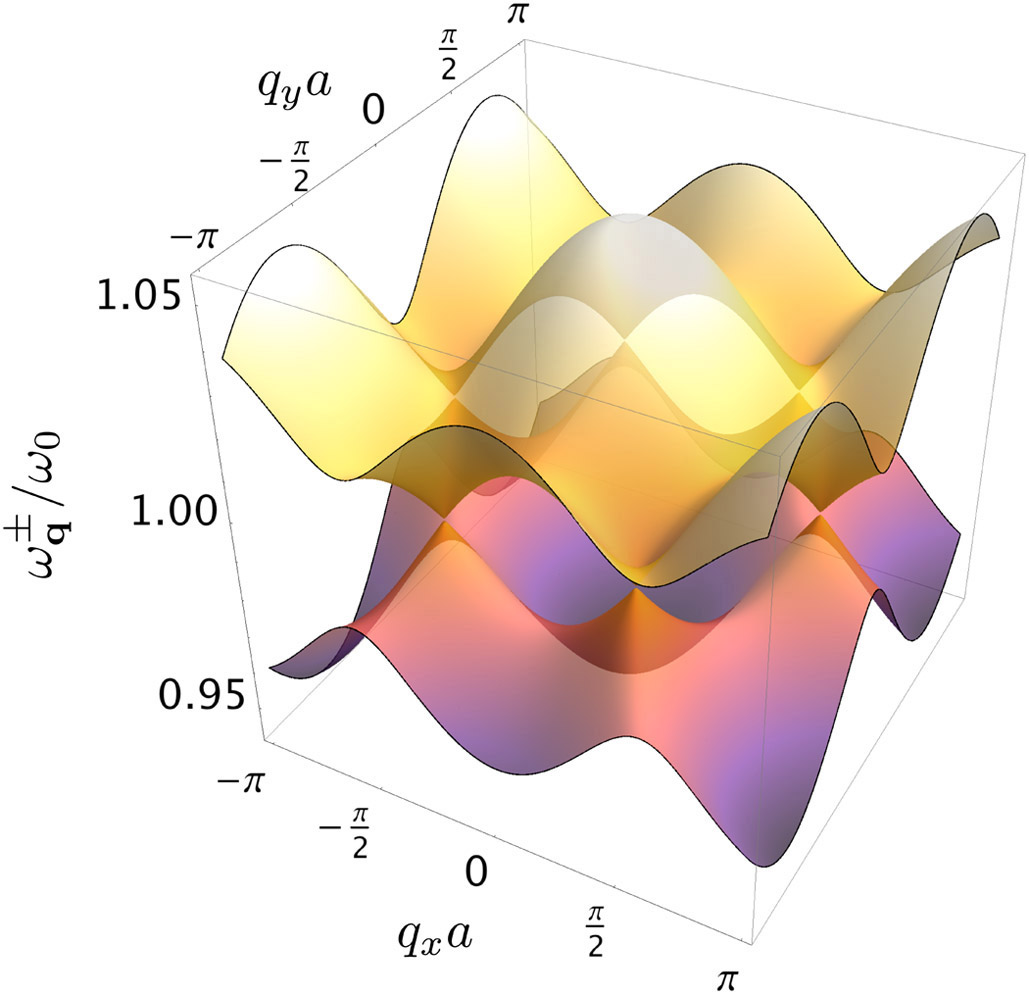 We also explored the CPs for arbitrary LSP dipole orientations. The evolution of the interaction strength dramatically modifies the CP band structure, as summarized in Figure 3. For certain polarization directions we predict the existence of massless Dirac particles in the CP spectrum (blue-gray regions in Figure 3) while other dipole orientations lead to a band-gap opening (white regions in Figure 3). Thus a slight tilt in the LSP polarization corresponds to dramatic qualitative differences in the optical response of the metasurface, which turns from opaque to transparent at a given frequency. 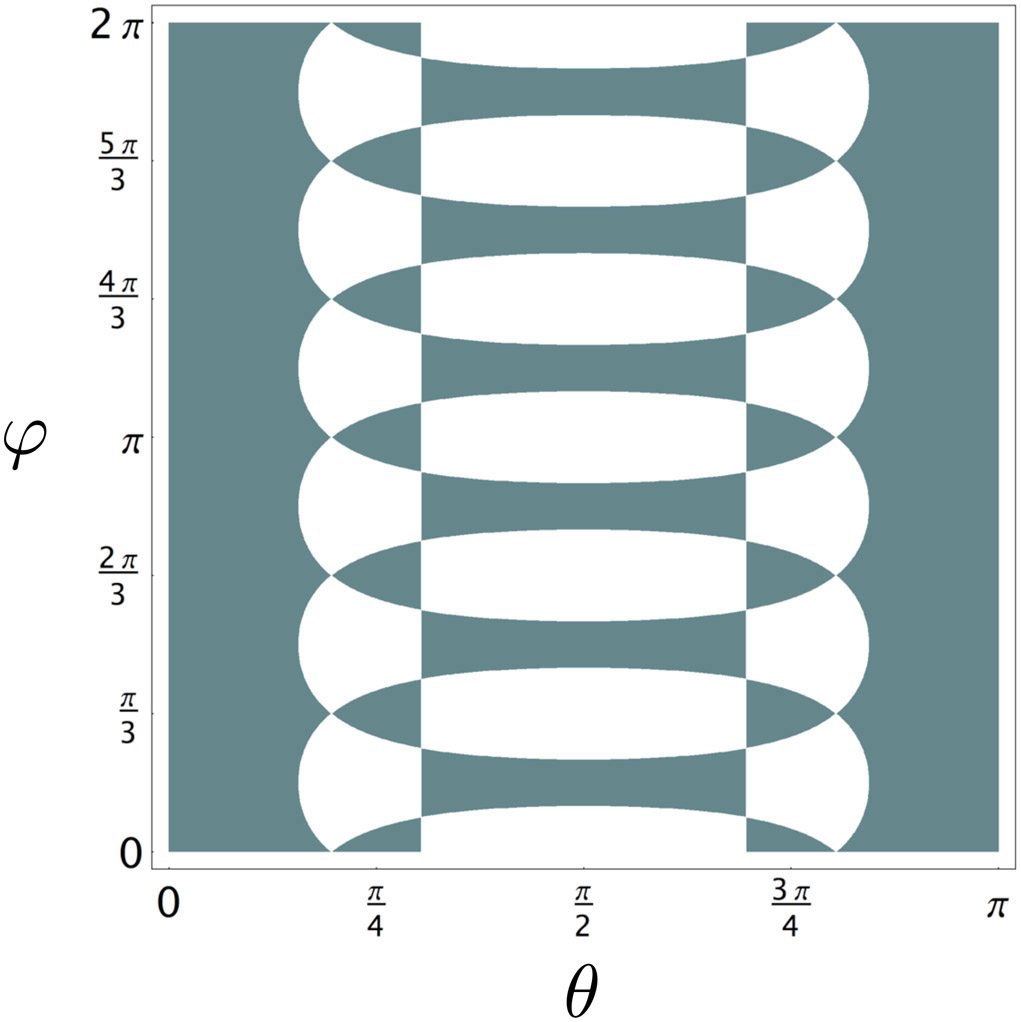 In summary, our work7 shows that 2D honeycomb arrays of metallic nanoparticles exhibit unique plasmonic properties. Collective oscillations of charges in the metasurface can behave as unprecedented particles called "massless Dirac plasmons." In addition, the optical response of the metasurface is highly tunable by simply tilting the polarization of the external radiation. Further work will involve a detailed analysis of dissipation and losses that limit the lifetime of plasmons.9 We will also explore the effect of imperfections in the lattice on the propagation of radiation in the metasurface.

Eros Mariani has been a lecturer in physics at Exeter since 2010. He holds a PhD in condensed matter theory from the University of Hamburg (Germany). His research focuses on various aspects of condensed matter theory, including graphene, nanoelectromechanical systems, and correlated states in reduced dimensionality.

Guillaume Weick has been a tenured assistant professor at Strasbourg since 2012. He holds a PhD in theoretical condensed matter physics awarded jointly by the Universities of Augsburg (Germany) and Strasbourg (France). His research focuses on nano- and mesoscopic systems where quantum coherence is important, such as metallic nanoparticles and nanoelectromechanical systems.