Major breakthroughs in photonics are changing how solar energy will power our future, how light illuminates our lives, and how technology will connect us to each other in new ways. The Journal of Photonics for Energy celebrates the International Year of Light.

Einstein's work laid the foundations for the quantum revolution; understanding the quantum nature of light and electrons was crucial to the discovery of other phenomena that involve the interaction of light with electric charges, such as photoconductivity, the photoelectrochemical (PEC) effect, and the photovoltaic effect.

One of the most common applications of the photovoltaic effect is in solar cells on rooftops, converting sunlight into electricity. Because of the photovoltaic (PV) effect, two dissimilar materials in close contact produce an electrical voltage when struck by light.

Currently most commercially available PV solar panels are based on inorganic semiconductors-particularly silicon, which is the second most abundant material in the earth's crust. When photons in sunlight hit a silicon solar panel, the energy frees electrons to move between dissimilar silicon crystals, generating a current of electricity. Silicon solar cells are relatively inexpensive to manufacture, but they're not the most efficient at converting solar energy into electrical energy; their maximum power conversion efficiency (PCE) appears to be 25.6%.

Solar cells based on other semiconductors are higher in efficiency but also higher in cost. Gallium arsenide (GaAs) cells have reached efficiencies of 28.8% under full-sun illumination; multi-junction solar cells, in which different semiconductor materials produce electrical current in response to different wavelengths of light, have achieved an efficiency of 37.9%. Such PV systems traditionally have been so expensive that they've only been used for specialty applications, primarily in space, but recent efforts to produce lower-cost modules have allowed penetration into new markets. 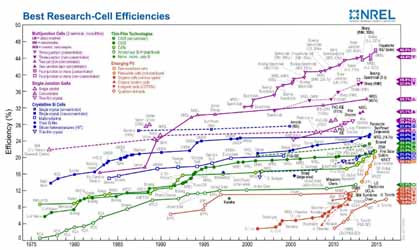 Latest chart on the progress of the power conversion efficiency of solar cells reported by the National Center for Photovoltaics at National Renewable Energy Laboratory (NREL). Click to enlarge.

Since these emerging cells are relatively new compared to their inorganic counterparts, it is not surprising that their efficiencies are much lower than those of more established inorganic solar cells. However, their PCEs have risen steeply over the last few years, especially for the promising PV technology based on organic-inorganic hybrid materials (e.g., perovskites), which has achieved efficiencies of 20.1% (certified, but not stabilized) in solid-state device configurations.

Researchers are also working on methods of trapping light within a solar cell more effectively, to limit the amount of energy lost because light reflects off the silicon crystals or layers of protective glass. Existing antireflective coatings (ARCs) have performance limitations, often minimizing the reflection for only a select region of the solar spectrum, and also being dependent on the angle of incidence. One possible solution is the use of nanostructured surfaces (e.g., micro- or nanopillars or nanowires) to minimize reflection across the full solar spectrum and also up to high angles. Another approach is to develop omnidirectional antireflective (ODAR) layers that have a downconversion effect, using high-energy protons to produce low-energy protons that can be absorbed by the semiconductor.

An alternative to converting sunlight into electricity is harvesting the thermal energy of sunlight directly. Sunlight can be focused onto long pipes coated with an optically absorbing material and filled with a high-thermal-capacity fluid, which is used to drive a turbine. The science of photonics has been applied to the development of advanced coatings with high absorption coefficients in the UV to the IR solar spectral region, including the development of carbon nanotube and metallic nanowire arrays, with the goal of creating nearly perfect black absorbers.

Progress in solar photovoltaics has opened up an interesting alternative way of converting thermal energy into electrical energy, called thermophotovoltaics (TPVs). Heat supplied to an emitter leads to the emission of thermal radiation (photons); thermally generated photons of sufficient energy are then absorbed in the TPV cell, which generates an electrical current in the same way as a conventional PV device. Current applications of TPVs include the space station, cars, and heavy industries.

Significant research is also being done on solar fuels as a storable energy source, a possible alternative to fossil fuels. In 1972, A. Fujishima and K. Honda demonstrated that water photochemically splits into hydrogen and oxygen at titanium dioxide (TiO2) photoelectrodes illuminated with sunlight. If the problem of the poor efficiency of sunlight-driven water splitting could be overcome, the hydrogen produced could be stored in fuel cells and later used for local electricity generation, for example as a transportation fuel for electric vehicles.

Optical and photonic sensors are widely used to make existing technologies that harvest energy and produce power more effective. The output power of solar thermal and PV systems can be maximized by the use of sun-tracking systems-electromechanical devices that move solar energy systems to keep them in the best orientation relative to the sun (perpendicular to solar radiation). The authors of the paper state that the use of sun trackers has the potential to increase the energy collected by solar energy systems by 10% to 100%, depending on factors including the time of the year and their geographical position.

In the oil and gas industries, electronic sensors have been slowly replaced by optical sensors that perform well under extreme temperatures and pressures. Based on recent developments in fiber optic sensing technology, these sensors are used for real-time, permanent wellbore and reservoir monitoring, which is critical for assuring safety and maximizing profitability. Optical systems are especially appropriate for oil field applications because, unlike electronic systems, they bring no ignition hazard.

Wind farms utilize light detection and ranging (LIDAR) technology, which determines wind speed by measuring the Doppler shift of light backscattered by aerosols in the atmosphere. The accurate measurements of wind speeds and turbulence make it possible to more effectively survey potential wind farm sites, optimize their design, and make dynamic adjustments to their operation.