The eyes of a submarine

At 4 am on 13 April 2018, Tomahawk missiles streaked across the night sky, striking a chemical weapons research facility in Syria. On its first deployment, the USS John Warner, a Virginia-class submarine, fired six missiles from the Eastern Mediterranean. With Russian ships, aircraft, and submarines lurking nearby, this nuclear-powered, fast-attack submarine launched the attack along with other US Navy ships, aircraft, and British and French allied forces. Thanks to superb vision, the submarine delivered a direct hit, while remaining undetected.

Over the past 30 years, there's been a remarkable transformation in the technology that gives a submarine sight. Submarine vision has evolved from periscopes with lenses, mirrors, and prisms, to sophisticated electro-optical instruments reliant on sensors, lasers, and fiber optics. Aboard the US Navy's most advanced Virginia-class submarines, high-tech photonics masts have replaced periscopes. Patrolling waters around the world, this new breed of submarine moves with increased stealth, sneaking and spying like never before.

A photonics mast (or optronics mast) was first installed and tested on the USS Memphis in 1992. Since then, the system has been regularly upgraded. Modularity has increased and the mast's diameter has declined.

The ability to see above the surface is essential for surveillance, intelligence gathering, and reconnaissance missions, but early submarines lacked this capability. In 1898, to fire a torpedo, the Navy's first commissioned submarine, the USS Holland, porpoised. It surfaced far enough to expose the conning tower and aim the weapon, then dove. Without a periscope, the submarine was blind.

In 1902, the Lake Torpedo Company in Bridgeport, Connecticut, launched the Protector, the first US submarine with vision. It carried an omniscope, the forerunner of the modern periscope. Prisms and lenses arranged inside the tube gave the crew a 360-degree view of the horizon and allowed them to estimate range. Submarine builder Electric Boat went on to develop its own periscope when the Lake Torpedo Company refused to sell the instrument separately. 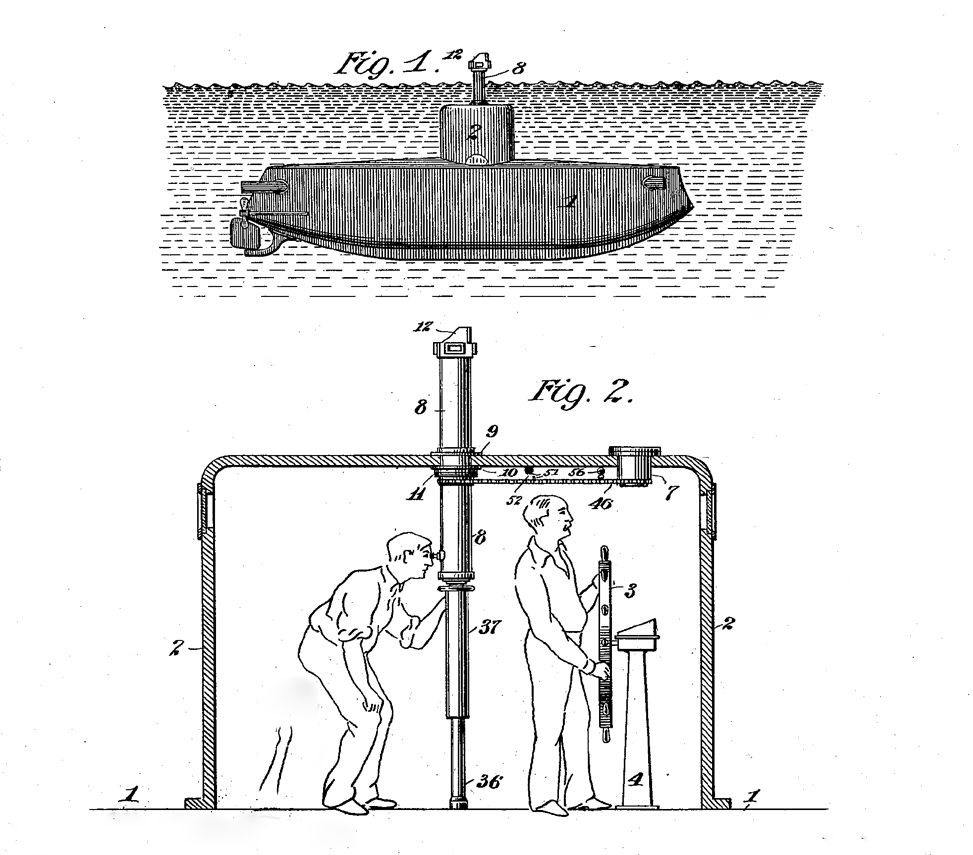 Primitive periscopes gave submarines the precious gift of sight, a window to the world above. However, they had their shortcomings. At increased speeds, pressure bent long tubes, distorting the image. If the periscope was rotated too far, the image flipped upside down.

A periscope perfected for Britain's Royal Navy became the US Navy's standard for submarines. Around 1911, American aerospace and defense contractor Kollmorgen improved the periscope by incorporating two telescopes inside an outer pressure resistant tube. The less conspicuous design was so successful, Kollmorgen became the US Navy's main supplier of periscopes. Over time, as tubes grew, optics improved and images sharpened, the future of periscopes seemed bright.

For over 50 years, periscopes were the eyes of a submarine. However, the instrument's location in a sub wasn't ideal. Installed in the center of the control room, the bulky device took up valuable space on the cramped upper deck. Sailors manning periscopes walked around in circles looking for threats. Periscopes also penetrated a sub's hull, so collisions with surface vessels, a major hazard for submarines rising to periscope depth, could rip a lethal gash in a sub.

"During World War II, at least nine submarines suffered periscope damage, mainly explosions or collisions," says Dr. Timothy Francis, senior advisory historian at Naval History and Heritage Command. "Every hole in a submarine hull is a weak spot. The fewer openings, the stronger the hull and the deeper the dives." 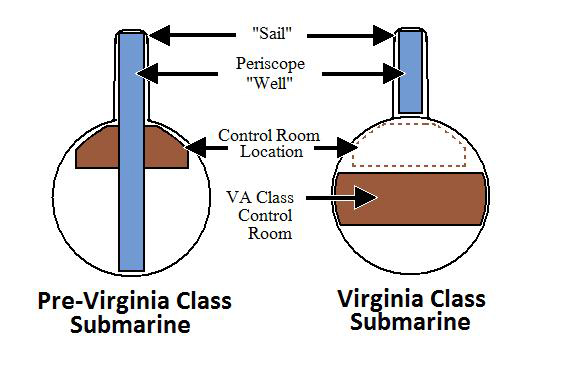 Comparison of design between a Virginia class submarine using a photonics mast versus other submarines that use a periscope. The photonics mast allows the control room to be located on the roomier second deck. Credit: HowStuffWorks

Kollmorgen began developing a new system under a Defense Advanced Research Projects Agency (DARPA) contract in 1988. They developed the photonics mast, a revolutionary new way for a submarine to see. In a contract worth $41.2 million, they supplied eight masts for the Navy's Virginia-class submarines, with each sub receiving two. To strengthen their optronic sensor business, L3Harris purchased Kollmorgen's electro-optics division in 2012. L3Harris' division in Northampton, Massachusetts, formally known as L3-KEO, is now the Navy's only supplier of photonics masts and an innovator in the field.

"A photonics mast has an 'outboard' portion fitted in the submarine's sail or fin. A pressure-proof dip-loop assembly connects outboard sensors to the submarine's hull. Fiber-optic cables pass through the hull connecting the mast to inboard cables, an inboard console, and a control station that controls the mast and does image processing and distribution," says Melvin French, director of International Maritime Business Development and Strategy at L3Harris. "There are a few photonics mast variants. In general, they include visual cameras, short-wave and mid-wave infrared cameras, and laser range finders. The photonics mast has separate optical/sensor channels for mid-wave IR and short-wave IR."

The outboard mast collects data at the surface. The telescoping antenna can be silently raised so the crew can sneak a peek using color, high-resolution black-and-white, and infrared cameras. "The mast can rotate 360 degrees and direct the line of sight anywhere on the horizon. It's designed to withstand wave-slap forces at speed," says French. Once the tip of the mast pops through the water, multiple sensors sealed in pressure-proof housing detect visible, short-wave infrared, and mid-wave infrared data.

The inboard components process and display data. Each sensor sends separate data through the fiber optic cable to the image processor, which adjusts the images, correcting for movement and rotation. Images are stitched together to create a 360-degree panorama of continuous motion, near real-time video with options to take snapshots and zoom in on objects. 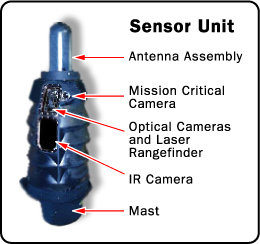 A photonics mast has a significant advantage over a periscope. Submariners no longer have to skirt the obtrusive equipment and the lookout. "Employment of photonics masts frees naval architects to locate the submarine's control room--the space where the captain and senior officers operate the submarine--to a more advantageous space on the ship," says French. Instead of one person seeing the surroundings with their gaze glued to the eyepiece, several people can view a monitor, allowing for joint decisions. Photonics masts no longer penetrate the hull, increasing a sub's survivability.

These masts continue to evolve. In 2015, L3Harris won a $48.7 million contract to provide slimmer, low-profile photonics masts on the Navy's Virginia-class subs. The Navy awarded L3Harris a $73.7 million contract in 2019 to repair, upgrade, and service the next generation of masts. "Routine upgrades of the sensors have improved performance through higher-resolution formats, lower noise, and improved sensitivity. With a more integrated inboard console, video can be shared over the ship's network. Better image processing algorithms have been implemented annually," says French.

"Counter-detection from airborne and surface ship radar systems is an increased threat. A future desire involves instantaneous 360-degree azimuth imaging so sailors can monitor their whole surroundings every time they raise the mast, rather than having to direct a narrow line of sight. There is an ever-growing need for smaller diameter masts with lower minimum exposure times while enhancing imaging performance. Our current focus is on improving modularity and upgradability." Fast upgrades using the latest materials ensures the fleet's stealth. Innovative companies are developing modular components that allow a submarine to hear. In the future, the eyes of a submarine may also be sporting ears.