As quantum technology nears readiness in some areas, industry is looking ahead to the workforce. Who are they?
01 November 2020
By Kevin Probasco
EPiQC zines can be downloaded and printed from bit.ly/EPiQC

When I grow up, I want to be a firefighter, veterinarian, president, or a... quantum engineer. For quantum technologies to revolutionize industries at a scale that matches the hype, quantum engineering must become the dream job for today's youth, and even for many of those already in the workforce. The jobs are going to be available. But will there be enough people with the right skills to fill them?

"This is a subject of strong interest to almost all our members," says Celia Merzbacher, associate director of the US-based Quantum Economic Development Consortium (QED-C). "QED-C represents a fairly diverse mix of companies and from across the quantum supply chain. This includes companies that provide materials or components to the quantum technology-such as lasers and photonics, ones doing software development, and even end users who are already thinking about how quantum-based capabilities could impact their company or area of business, like a pharmaceutical or a financial company. All of them have workforce issues where they're looking for people with specific skills."

As Merzbacher hinted, the future of quantum technology is as much about enabling applications that are not quantum specific as it is the realization of core quantum technologies like quantum computing or communication. Whether that's in materials science, biology, banking, ultraprecise timekeeping, or some other not yet imagined application, the need for basic understanding of quantum principles and technologies will be critical for engineers in those fields to take advantage of the new quantum-enabled capabilities. Still, it can be hard to convince people to learn tomorrow's technologies today, especially those that are not fully realized.

"But that doesn't mean we shouldn't be ready for when they are," declares Diana Franklin, an associate professor of computer science at University of Chicago and co-leader of Q2Work, an NSF-funded program that provides support for the Quantum Information Science education ecosystem through digital tools, outreach, and collaborative workshops.

"There's currently a shortage of qualified workers, and there's projected to be more demand and more shortage later both in terms of absolute numbers and in terms of diversity," says Franklin. Acknowledging the lack of diversity currently in university math, physics, and computer science programs, Franklin believes the best way to fill these gaps is to target high school students, introduce them to basic quantum principles, and prepare them for college where a basic understanding can be leveraged into more applied learning.

Targeting both students and teachers, Franklin and her team have designed zines and other outreach material to help explain core quantum information science concepts without too much math or prerequisite knowledge. She hopes to get buy-in for the future of quantum from the youth of today. "It's actually a very hard sell. The two most important things for us are to emphasize the economic stability and the jobs that are going to be there. Then the second one is the impact on society, the positive impact on society." 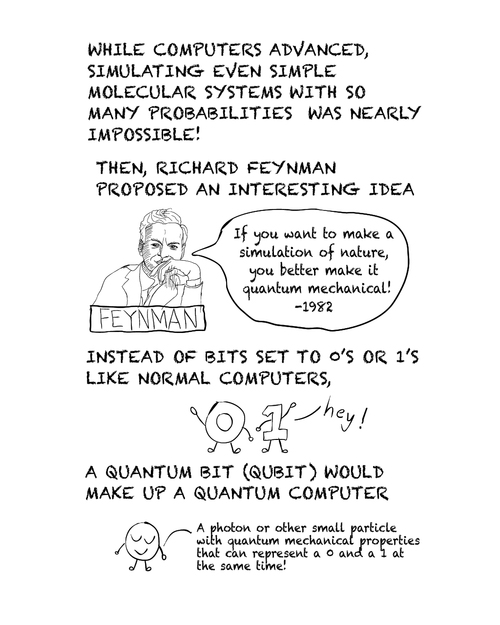 EPiQC zines can be downloaded and printed from The University of Chicago EPiQC website.

As Franklin points out, even in quantum information science, the potential jobs are not a singular title or skillset. From theorists to software developers and systems engineers, the technology will have a similar roadmap and product cycle as conventional computing. Having even a basic understanding of quantum will give you a leg up on the competition.

"There are lots of jobs on lots of levels, as there are probably with any transformative technology," she says. "A lot of technology work needs to be done to get us to the point where we can make very large quantum computers, and then we have the systems people who optimize what the algorithms do, and there's a lot of middleware to be made between the two ends. And quantum computing is just a subset."

As for how big the potential employment market may become for quantum engineers, Merzbacher points out the exponential nature of possible applications. "I think there are a lot of ways to guesstimate a number. Are you just talking about the companies that are developing and ultimately making and selling hardware, like the IBMs of the world and Honeywell and Rigetti and others? Or are you also including the Goldman Sachs, who are going to want a quantum expert to put in systems that work for their business?"

Once you consider the numerous industries that could benefit from quantum technology, and their need for a quantum expert for system design and programming, the job pool suddenly seems very, very deep. Merzbacher believes that many industries have become aware of the potential role of quantum technology, and they will need to start investing in order to be positioned to take advantage of crucial advancements. "And that's, I suppose, the sign of an emerging industry in technology," she adds.

The bridge from hype and promise to an actual industry will require more than just faith and investment: It will take a talented and innovative workforce to push quantum technologies to be ready for mass production and adoption. It will also require engineers who understand how to leverage those technologies for end-use applications to fully realize the promise of quantum.

That promise is what excites and propels many, including Franklin. "Nobody realized that Google Maps was going to happen 10 years before it did. And so, as with any transformative technology, you can't predict the ways it will be used and change things," she said. "We don't know that this is going to expose all of the secrets of the universe, but conventional computing is not going to expose any more of them. So this is the only shot we have."

Kevin Probasco is the SPIE manager of Technical & Community Communications.