Car accidents are responsible for approximately a million deaths each year globally. Among the many causes, driving at night, when vision is most limited, leads to accidents with higher mortality rates than accidents during the day. Therefore, improving visibility during night driving is critical for reducing the number of fatal car accidents.

An adaptive driving beam (ADB) can help to some extent. This advanced drive-assist technology for vehicle headlights can automatically adjust the driver's visibility based on the car speed and traffic environment. ADB systems that exist commercially are a marked improvement over manually controlled headlights, but they suffer from limited controllability. Whereas spatial light modulators, like liquid crystal pixels or digital micromirrors, can alleviate this problem, they are often expensive to implement and lead to heat loss from unutilized light power.

In a recent study published in the Journal of Optical Microsystems, researchers from Japan have come up with an alternative to conventional ADB systems: a microelectromechanical systems (MEMS) optical scanner that relies on the piezoelectric effect of electrically induced mechanical vibrations. This design consists of a thin film of lead-zirconate-titanate oxide (or PZT), which induces mechanical vibrations in the scanner in synchronization with a laser diode. The optical scanner spatially steers the laser beam to form structured light on the phosphor plate, where it is converted into bright white light. The light intensity is, in turn, modulated by the ADB controller based on the traffic, steering wheel angle, and vehicle cruising speed. University of Tokyo researcher Hiroshi Toshiyoshi, one of the authors on the paper, explains, "What is unique about this setup is that the laser beam is converted into white light at high efficiency, which reduces heating of the ADB system."

The researchers designed the optical scanner on a single chip consisting of a bonded silicon-on-insulator wafer with the PZT layer grown on it and laminated with metal to form piezoelectric actuators. They arranged the actuators as suspensions to allow for large-angle horizontal and vertical deflections of the scanner. This, in turn, enabled two-dimensional scanning of the headlight beam. Further, they designed the modes so that they don't react to low-frequency noise, such as from other vehicles. Their ADB system also accounts for temperature variations. Finally, they mounted the module on a vehicle and evaluated its performance for actual driving.

The researchers found that the ADB with a MEMS scanner provided the driver with better visibility, especially when it comes to seeing pedestrians. It could also reduce the glare from oncoming vehicles and reconfigure the illumination area depending on the cruising speed of the vehicle.

While this technology certainly advances drive-assist technology, it also has other potential applications in light detection and range finding, as well as inter-vehicle optical communication links, which means that the system could find use in self-driving technology of intelligent traffic systems in the future, taking us another step toward risk-free driving. 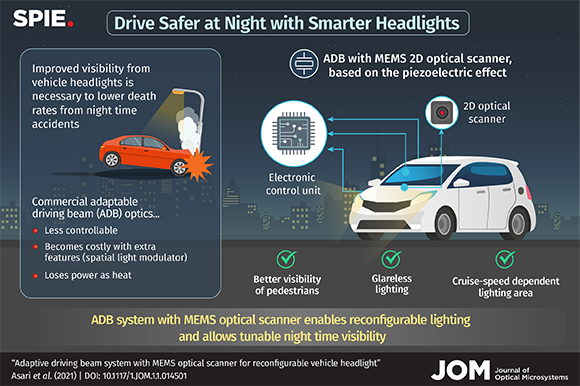