A new look at live cells in 3D

Live cells are highly dynamic in all three dimensions, as shown by their membrane fluctuations, mass transport, growth, and motility. These dynamic activities are good indicators of viability and function, not only of the cell itself, but also of the entire organism to which the cell belongs. Therefore, it is desired to study the 3D dynamics of live cells to understand their activities and roles in organisms. Previous studies have relied heavily on techniques, such as fluorescence confocal microscopy, that require tagging and fixing of the specimen and are limited by photobleaching and phototoxicity when studying cells in their natural state.

We have developed a label-free tomographic imaging technique we call white-light diffraction tomography (WDT) to obtain high-resolution 3D structures of live cells. When light and an inhomogeneous object interact, the light is scattered and its amplitude and phase change (see Figure 1).1 When the object, such as a cell, is transparent to the light, only the phase of the incident light changes and these changes encode the 3D structure of the transparent object. WDT works by accurately measuring the phase of the electromagnetic field at different depth positions to obtain the complex scattered field from the object and deconvolving it with the ‘point spread function.’ WDT is based on a system called spatial light interference microscopy (SLIM)2, 3 and generalizes Wolf's diffraction tomography theory4 to illumination with broadband fields and imaging rather than scattering measurements. It achieves a resolution of 350nm transversely and 890nm axially. 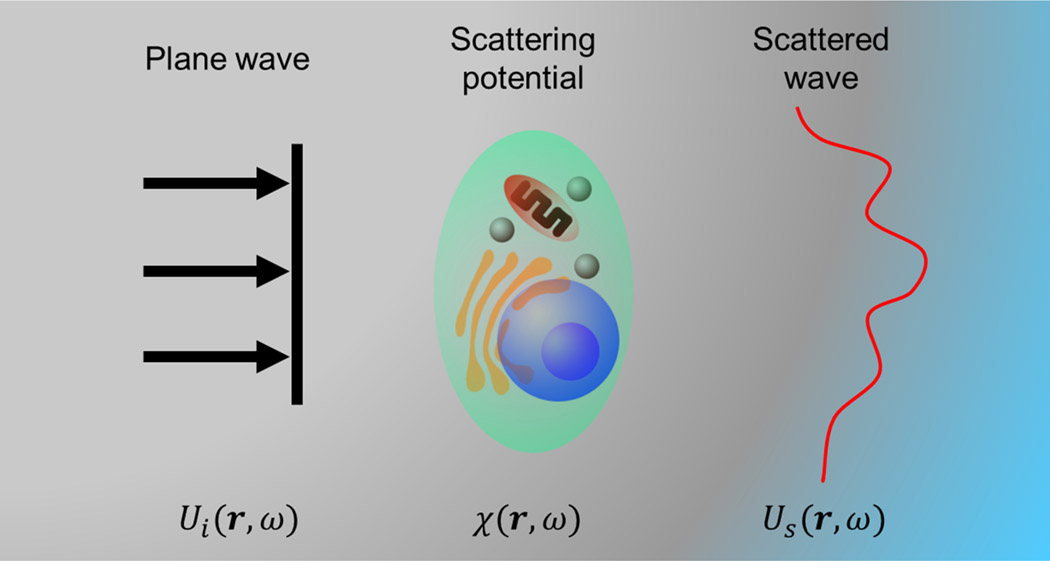 We first demonstrated WDT by imaging unlabeled live cells such as an echinocyte (a red blood cell covered in tiny spikes), Escherichia coli (E. coli), and a human colon adenocarcinoma cell (a cancerous cell originating in glands) of type HT-29. Figure 2(a) compares SLIM and WDT images of an echinocyte to show the improvement in resolution. A scanning electron microscopy (SEM) image and confocal fluorescence image of similar cells are also presented to show the similarity in morphology between the WDT image and other conventional techniques. In Figure 2(b), 3D renderings of SLIM and WDT measurements show that WDT provides much more detail than SLIM. 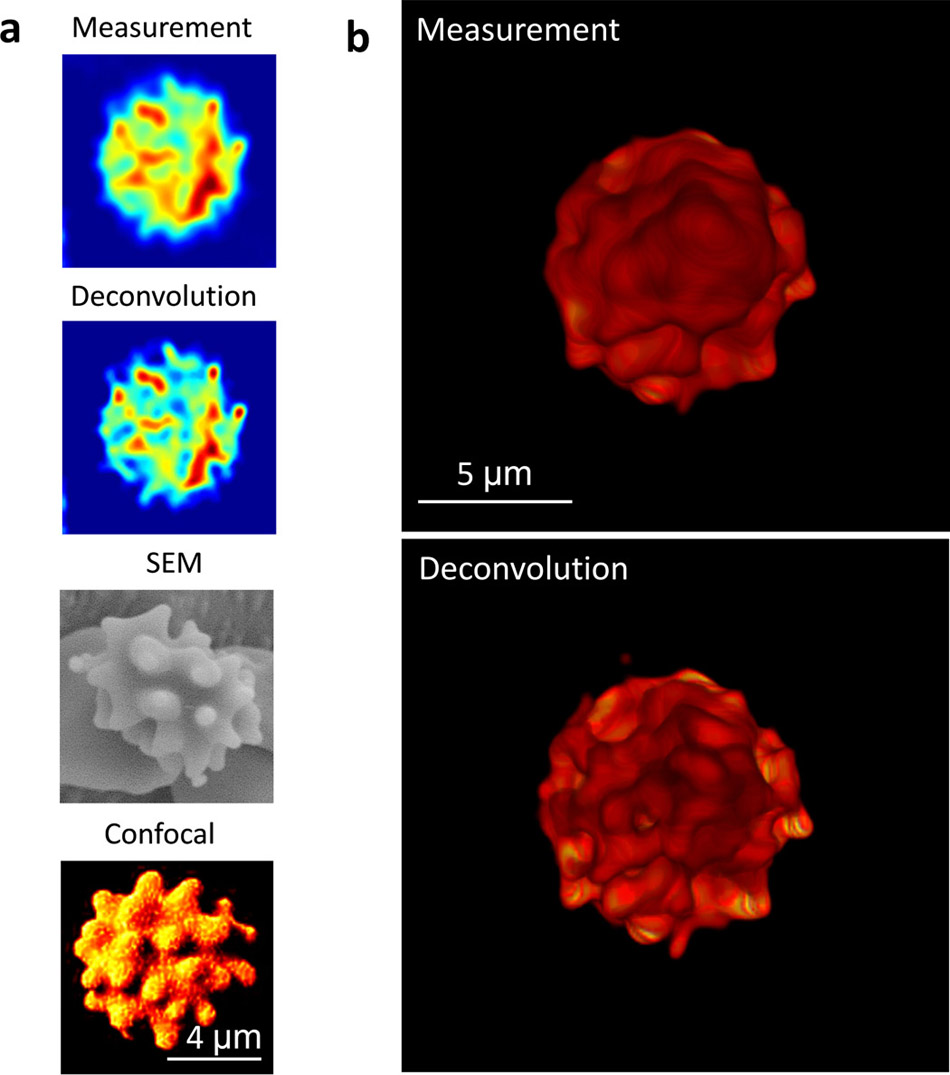 Figure 2. White-light diffraction tomography (WDT) measurement of an echinocyte. (a) Comparison between a spatial light interference microscopy (SLIM) measurement and a WDT image (‘Deconvolution’), along with a scanning electron microscope (SEM) and confocal fluorescence image. (b) 3D renderings of the SLIM and WDT images from (a). (Reprinted with permission.2)

WDT also reveals subcellular structures, such as the helical protein deposition within an E. coli cell. Figure 3(a) compares the SLIM measurement and WDT reconstruction of an E. coli cell to reveal a drastic difference in the structure revealed. Cross-sectional images at different parts of the cell also show the increased 3D resolution of WDT. Figure 3(b) shows a 3D rendering of the bottom half of the cell to emphasize the helical subcellular structure. 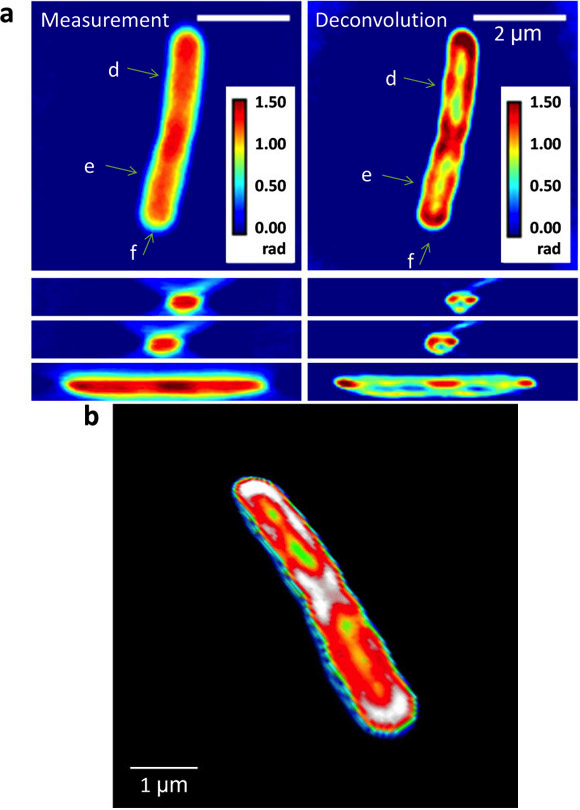 Figure 3. WDT measurement of an E. coli cell. (a) Comparison between SLIM and WDT images in both transverse cross-section and axial cross-sections. (b) WDT 3D rendering of a bottom half of the cell to emphasize the helical structure. (Reprinted with permission.2)

WDT is also capable of reconstructing larger mammalian cells: we demonstrated this capability by measuring an HT-29 cell. Figure 4 is a 3D rendering of the cell, false colored by phase value. The quantitative information used for this false-coloring successfully segments the cell into three parts: cell membrane, nuclear membrane, and nucleoli. It can be seen that WDT recovers both the morphological details of the sample and the quantitative phase shift through the sample. Since the phase is directly related to the non-aqueous content distribution, or dry mass density, within biological cells,5 WDT essentially provides a 3D distribution of dry mass within the sample. 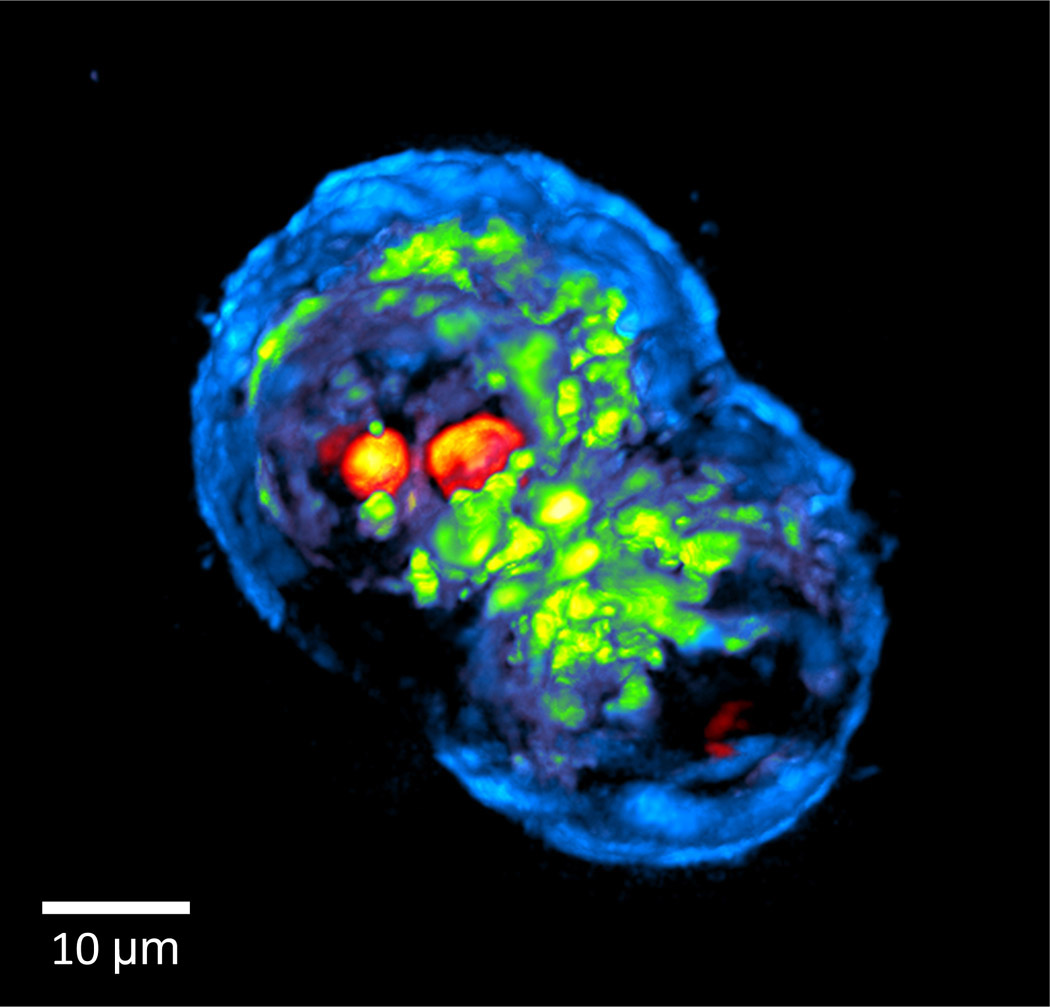 In addition, WDT can measure a live cell in 3D for a long period of time. Figure 5 shows three slices at different depth positions of a human cell line (HeLa) cell, imaged for 24 hours. The membrane dynamics and division of nucleoli show that the cell was kept alive throughout the imaging process. This is made possible by the high stability of SLIM and an environmental control system that provides a suitable temperature and atmosphere.

Figure 5. Three slices (at various positions on the Z-axis) from WDT images of a human cell line (HeLa) cell measured over 24 hours. Only a portion of the entire dataset is shown for better presentation.

In summary, we have introduced WDT as a new label-free tomographic technique, which is capable of 3D time-lapse imaging of live cells with submicron resolution in all three dimensions. With its noninvasive and quantitative nature, we expect WDT to become a standard tomographic imaging technique in biomedical imaging and provide further insights into a variety of biological samples. With fast WDT systems, we are now able to look at fast dynamics within individual cells, such as transport and membrane fluctuations. We are also studying multiple cells in a 3D structure to understand how to mimic actual biological microenvironments, such as a neural network or tumors.

This research was supported in part by the National Science Foundation (grants CBET-1040462 MRI and CBET 08-46660 CAREER) and the Science and Technology Center for Emergent Behaviors of Integrated Cellular Systems (EBICS, CBET-0939511). For more information, see our website.6

Taewoo Kim is a doctoral student at UIUC, where he also received his BS and MS in electrical and computer engineering. He is a coauthor of 12 peer-reviewed journal articles and is the first author of eight of those. He has also coauthored 14 conference papers, two patents, and one book chapter.

Renjie Zhou is a Beckman Institute graduate fellow at UIUC. He is interested in applying optical technologies to new research areas such as biomedicine, semiconductor metrology, and remote sensing.

Lynford Goddard is an associate professor of electrical and computer engineering at UIUC. His group fabricates, tests, and models photonic sensors, circuits, and instrumentation, develops novel device processing techniques, and applies quantitative phase microscopy for semiconductor wafer metrology. In 2010 he received the Presidential Early Career Award for Scientists and Engineers and in 2011 the AAAS Early Career Public Engagement Award. He is coauthor of 120 publications and six patents.

Gabriel Popescu is an associate professor at UIUC. He received a BS and MS in physics from the University of Bucharest (Romania) in 1995 and 1996, respectively, and a PhD in optics from the Center for Research and Education in Optics and Lasers at the University of Central Florida in 2002. He is a SPIE Fellow and a senior member of the Optical Society of America. He founded Phi Optics Inc., a company developing quantitative phase imaging technology for materials and life-science applications.