A reflection-type 3D screen using a retroreflector film increases the viewing angle of the projected image while preserving its perspectives.
07 May 2014
Sung-Wook Min

In movie theaters and conference rooms where large-scale displays are needed, projection systems use a lens with an adjustable focal length to resize the projected images. Such systems are capable of handling requirements such as high-speed (more than 600Hz), high-density (pixel size less than 10μm), and stereoscopic displays. In recent years there has been increasing interest in 3D displays, especially those that do not require the audience to wear special glasses to view the 3D effect, and there is great interest in developing practical 3D projection systems.1, 2

There are two types of 3D displays. The first is a stereoscopic system, such as is used in a movie theater, where the system presents different 2D images to the right and left eyes, and the brain perceives depth information from an essentially flat image. Stereoscopic displays have a narrow exit pupil (a virtual aperture in the optical system, through which light rays must pass to be visible to an observer), and require a diffuser screen to broaden the range of angles from which the image can be seen. The second type—a ‘true’ 3D image projection system—projects volumetric images with additional information such as depth and perspective, where the apparent position of an object changes as the viewer changes position. Such systems require a projection lens with a narrow aperture, but this restricts the angle over which the image can be observed. Thus, in practice these systems also require a special ‘3D screen.’ However, conventional diffuser screens scatter the incident light and blur the projected 3D image such that the depth information and perspectives are lost. A practical 3D image projection system requires a screen that can not only increase the viewing range of the image but also preserve its perspectives.

There have been previous attempts to increase the visibility of 3D images. An ‘optical depth converter’ comprising a pair of lens arrays has been reported.3 However, it is very difficult to align the two identical lens arrays. The distance between the two lens arrays must be twice the focal length of the component (‘elemental’) lenses, and the two lens arrays must be aligned symmetrically. Recently, a microhole mirror array was introduced as a floating device for a volume-scanning 3D display, which plays a very similar role to that of a 3D screen.4 It induces no optical aberrations and so presents a clear 3D image. However, it is hard to manufacture, and to get a sharp image you need small holes, which reduces brightness.

We have proposed a reflection-type 3D screen using a retroreflector, which combines a lens array and a retroreflector film.5 The retroreflector is an array of small ‘corner cubes’ that reflect the incident light back in the same direction from which it arrived at the screen. If an image with a small diverging angle is projected onto the proposed device, each lens element in the lens array uses the limited aperture to make a focused ‘elemental image’ in front of the retroreflector. As each point light source is reflected by the retroreflector film, the direction of the light source appears to be reversed 180° and its position moves behind the film. The apparent location of the projected image can be controlled using the numerical aperture (representing the range of angles over which image-forming light waves pass through) of each lens element. Increasing the numerical aperture can induce a wide viewing angle of the projected image. As in integral imaging, which integrates an array of micro images into a complete 3D image through a lens array, the elemental images produced by our 3D screen preserve depth information for integration into a whole 3D image. In this way, our proposed device acts as a reflection-type 3D screen that can represent a 3D image with a wide viewing angle. Compared with previous 3D screens, the viewing angle and the fill factor (ratio of illuminated to non-illuminated area) of our screen are superior.

Figure 1 shows the experimental setup to verify the feasibility of our proposed retroreflector 3D screen. The screen is composed of a lens array with pitch of 1mm and focal length of 3mm and the retroreflector film with a corner cube 200μm across. The characters ‘K’ and ‘H’ are real objects located 325 and 425mm from the lens, respectively. They are projected by the lens (focal length 152mm and aperture size 64mm) to a diffuser, a mirror, and our proposed screen (positioned 272mm from the lens, on the yellow line) in turn, for easy comparison of the resultant images captured through the beam splitter inserted between the lens and the components.

Figure 1. Experimental setup of reflection-type 3D screen. The diffuser screen, the mirror, and the proposed 3D screen are shown by a yellow line. The position of the viewer is shown by the camera.

Figure 2 compares the resultant images from the three optical components under test. The images from the diffuser without the aperture restriction are 2D, that is, the view from left, center, and right are identical. The character ‘H’ is blurred because the diffuser is located at the focus of the character ‘K,’ but ‘H’ is further away. The images are also dim in comparison with the mirror and the proposed 3D screen. The images from the mirror with the aperture restriction are 3D and the perspective changes with the viewing direction, but only partial images are observed. The images from our proposed 3D screen (without aperture restriction) are also 3D, with the perspective dependent on the viewing direction. However, the perspectives are reversed compared with those of the mirror: that is, the K appears in front of and overlapping the H in the left image for the 3D screen, but in the right image for the mirror. This is known as the pseudoscopic phenomenon, which should be taken into account and corrected when developing a practical 3D projection system with orthoscopic images. 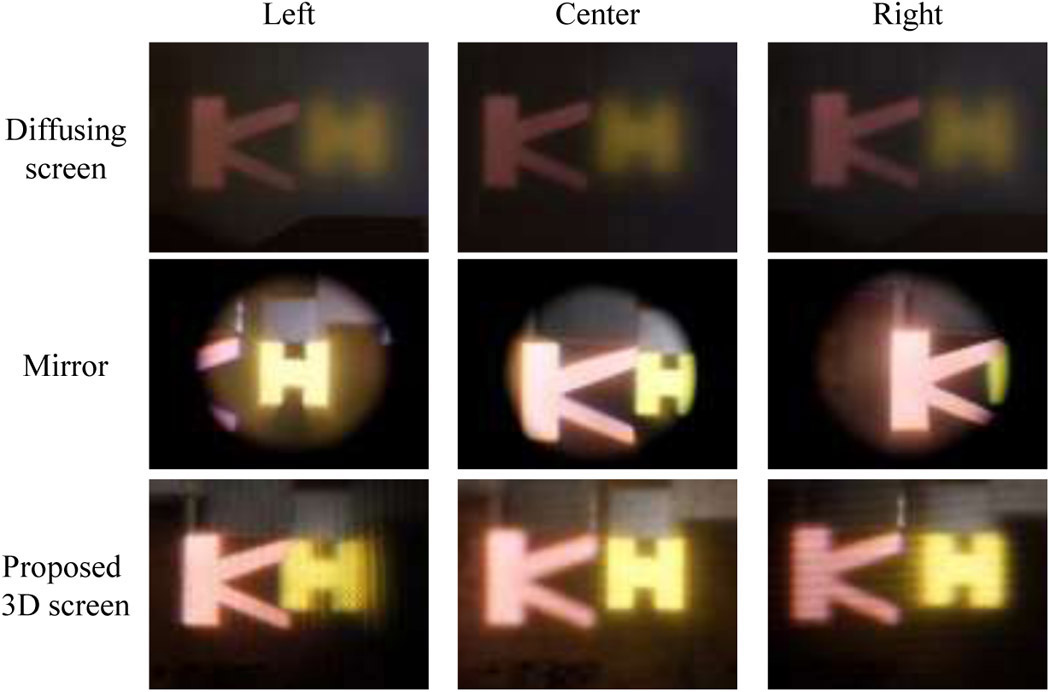 In summary, we have proposed a reflection-type 3D screen using a retroreflector. Using the proposed device, a large wide-view 3D projection display system can be accomplished, suitable for use in a 3D movie theater. We are now analyzing the characteristics of our 3D screen and the effect of parameters such as the size of the corner cubes in the retroreflector, the elemental lens, and the focal length of the lens array. We are also considering potential applications such as a light-field 3D display system.

Sung-Wook Min has been a faculty member since September 2007. His research interests are 3D display systems, 3D information processing, and advanced display systems, especially those based on integral imaging.