The second chromatic aberration (and the last of the seven primary lens aberrations) is lateral color. For an on-axis light bundle, the central ray of that bundle will coincide with the optical axis of the lens. For off-axis light bundles the corresponding central ray is referred to as the chief ray. The height of the chief ray at the image plane defines image size. When lateral color is present in the lens system, the refraction of the chief ray will vary as a function of wavelength, causing each wavelength to be imaged at a slightly different height on the image plane. The result will be a chromatic radial blur for the off-axis image points. In the case of a simple lens with the chief ray passing through the center of the lens, there will be minimal refraction of that ray and therefore minimal lateral color. Any lens system that is nearly symmetrical about the point where the chief ray crosses the optical axis (the aperture stop) will have little or no lateral color because the tendency will be to have lateral color cancel as it passes through the front and rear halves of that lens.

On the other hand, the eyepiece is a classic example of a lens form that has large amounts of chief ray refraction that is not symmetrical about the aperture stop. As a result, in most eyepiece designs, lateral color will be found to be a major contributor to degradation of off-axis image quality. Figure 6.11 illustrates the chief-ray path, first through a simple lens and then through a typical eyepiece. The presence or lack of chief-ray refraction and the resulting lateral color are shown for each case. 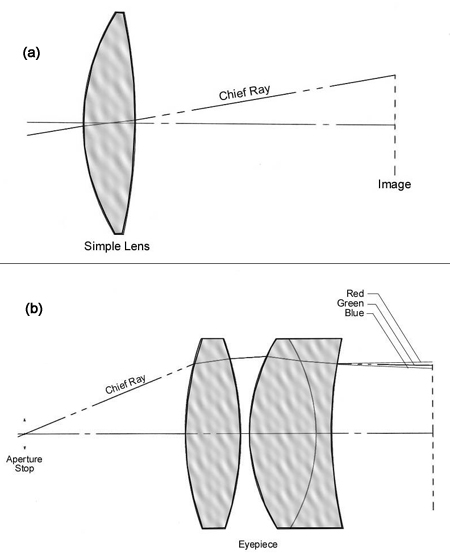