Excerpt from Modulation Transfer Function in Optical and Electro-Optical Systems

The modulation transfer function is the magnitude response of the optical system to sinusoids of different spatial frequencies. When we analyze an optical system in the frequency domain, we consider the imaging of sinewave inputs (Fig. 1.8) rather than point objects.

A linear shift-invariant optical system images a sinusoid as another sinusoid. The limited spatial resolution of the optical system results in a decrease in the modulation depth M of the image relative to what is was in the object distribution (Fig. 1.9). Modulation depth is defined as the amplitude of the irradiance variation divided by the bias level: 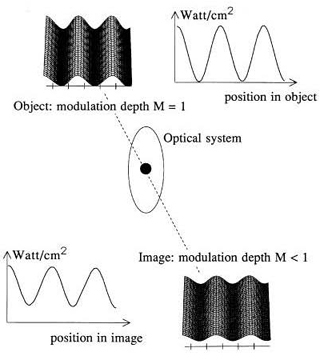 We can see from Fig. 1.10 that modulation depth is a measure of contrast, with

The M of the object waveform does not need to be unity—if a lower input modulation is used, then the image modulation will be proportionally lower. 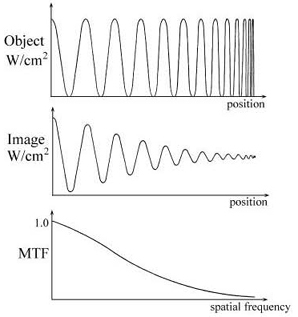