The basic principle of an optical autocorrelator is to split an incoming pulse into two copies and to superimpose those with a variable temporal delay. A nonlinear interaction is used for obtaining a signal that depends on the pulse overlap, and the pulse duration can be retrieved from that signal.

The simplest type of device is the intensity autocorrelator. Here, the two pulse copies, generated with a beamsplitter (BS), meet in a nonlinear crystal. The signal is generated via frequency doubling (which can also be regarded as sum frequency generation with two equal-frequency inputs). The nonlinear signal is finally detected with a photodetector, which does not need to be fast. The autocorrelation signal for a given temporal delay τ (calculated from the arm length difference) is

where P(t) is the time-dependent optical power. The shorter the pulses are, the faster the autocorrelation signal will decay when τ is increased. For a known temporal pulse shape, the pulse duration is some factor times the width of the autocorrelation signal. For example, for sech2-shaped pulses, that factor is ≈0.65. The table below lists that factor for different pulse shapes.

For very short pulse durations (for example, 10 fs), the autocorrelation signal can be distorted by various effects, such as the geometrical smearing effect resulting from the finite relative angle of the beams in the crystal or group velocity mismatch in the crystal. The frequency-dependent reflection and chromatic dispersion of the beamsplitter, mirrors, and focusing lens can also be relevant.

In an interferometric autocorrelator, the two pulse copies are collinearly sent into the crystal. A spectral filter transmits only frequency-doubled light to the detector. In that configuration, a frequency- doubled signal also occurs when the pulses are not overlapping, that is, the signal is not background-free. However, characteristic fringes occur for smaller delays, and again the pulse duration can be extracted from the width of the autocorrelation signal. The figure below shows that signal for an unchirped sech2-shaped pulse with a duration of 15 fs. 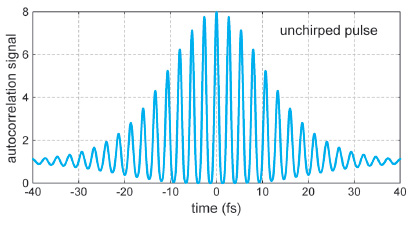 Unfortunately, other pulse shapes (even asymmetric ones) can result in a very similar autocorrelation trace.

A common problem is that chirped pulses can generate a signal that suggests a too-narrow value for the pulse duration, as shown in the graph below for a chirped 15-fs pulse. Therefore, the shape of the autocorrelation signal needs to be carefully observed, and the method is problematic for pulses with significant chirp- particularly when the temporal shape of the chirp is not known. 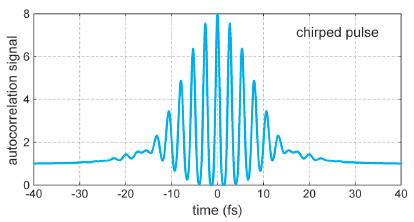 Again, various factors can affect the signal for very short pulse durations. Examples are the group velocity mismatch in the crystal and frequency-dependent reflection and chromatic dispersion of the beamsplitter, mirrors, and focusing lens.

For long pulse durations, it can be inconvenient to record the many fringes of an interferometric signal. The fringes can then be averaged out, or an intensity autocorrelator is used.