Mode locking is the most important technique for generating pulses with picosecond and femtosecond durations. When a laser is mode locked, one or sometimes several pulses are circulating in the laser resonator. The case of a single pulse is most common. Each time the pulse hits the output coupler mirror, a part of its energy is emitted, so the laser output is a regular pulse train. The gain medium replenishes the pulse energy in each roundtrip.

The pulse duration is usually far shorter than the round-trip time. In steady-state operation, the duration is determined by an interplay of various effects that the pulses experience in each resonator round-trip. Typical pulse durations are between 30 fs and 30 ps, but values down to ≈5 fs have been achieved with Ti:sapphire lasers.

Due to the high pulse repetition rate, the pulse energy cannot be very high; it is typically between a few picojoules and hundreds of nanojoules.

The term mode locking resulted from an interpretation in the frequency domain: in the mode-locked state, several or even many axial resonator modes are oscillating with a locked relative phase. However, the physical phenomena are more easily understood in the time domain.

In an actively mode-locked laser, as shown below, mode locking is achieved with a modulator (for example, electro-optic type), which modulates the resonator losses in exact synchronism with the resonator round-trips. The modulator is often placed near an end of the resonator.

The circulating pulse goes through the modulator at times where the losses are smallest, and the slightly higher losses in the pulse wings slightly shorten the pulses. 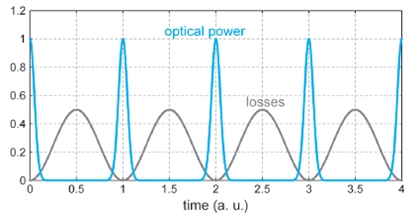 After thousands of round-trips, a steady state is reached where this shortening effect is balanced by pulsebroadening effects (for example, the limited gain bandwidth or chromatic dispersion). The pulse duration of actively mode-locked solid-state lasers is typically a few tens of picoseconds. This means that the pulse bandwidth is far smaller than the gain bandwidth of the laser medium.

As the circulating pulse becomes shorter, the pulse shortening action of the modulator is reduced, while pulse broadening effects become stronger. Equilibrium is reached where both effects are equally strong. 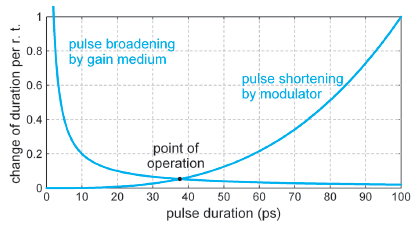 The major pulse broadening effect is often spectral gain narrowing, caused by the finite gain bandwidth of the laser medium. In that situation, it is relatively simple to calculate the pulse duration in the steady state, as was first done by Kuizenga and Siegman (Ref. Kuizenga and Siegman 1970). The result is

In a passively mode-locked laser, the loss modulation is done by a saturable absorber, such as a SESAM. This mechanism allows us to generate shorter pulses than with active mode locking. The reason is that the shorter the circulating pulses become, the faster the loss modulation.

The pulse duration is again determined by a balance of various effects, including the pulse shaping action of the saturable absorber as well as pulse broadening by the limited gain bandwidth. As the pulses can become very short, chromatic dispersion and optical nonlinearities such as the Kerr effect in the gain medium can also play an important role. The achieved pulse duration can even be more than an order of magnitude smaller than the recovery time of the saturable absorber. The pulse bandwidth can be a significant fraction of the gain bandwidth, if other effects (for example, higher-order dispersion) do not limit the pulse duration.

Passive mode locking leads to a simpler laser setup, since synchronism of the loss modulation is automatically achieved, and an electronic driver is not required. However, the pulse generation process is more complicated for various reasons, and it can be significantly more difficult, for example, to achieve stable operation.