While most semiconductor lasers emit in the nearinfrared region, quantum cascade lasers (QCLs) emit in the midinfrared, with wavelengths between a few microns up to more than 10 µm, sometimes even many tens of microns (for optical frequencies in the terahertz region).

Instead of interband transitions (conduction band to valence band), QCLs rely on intersubband transitions between the sublevels of quantum wells with a much smaller photon energy. In order to more efficiently utilize the electric power and generate a higher gain, a cascade of such transitions is used, 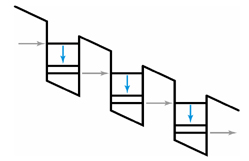 where electrons can tunnel from the lowest level of one quantum well to the upper laser level of the next quantum well. The figure shows the electron energy versus position in a region with three quantum wells, where one electron going through the structure can contribute three laser photons.

While continuously operating, room-temperature devices are normally limited to output power levels in the lower milliwatt region (although hundreds of milliwatts can be generated in exceptional cases), hundreds of milliwatts are easily possible with liquid-nitrogen cooling. Even at room temperature, watt-level peak powers can be achieved by using short pump pulses.

Perhaps the most important applications for quantum cascade lasers will be spectroscopy of trace gases (e.g., the detection of air pollution). Besides the suitable wavelength range, QCLs usually feature a relatively narrow linewidth and good wavelength tunability, making them very suitable for such applications.