A vertical-cavity surface-emitting laser (VCSEL) emits light that is perpendicular to the semiconductor wafer surface. The laser resonator consists of a thin active region with one or several very thin (quantum well) amplifying layers sandwiched between two distributed Bragg reflectors (DBRs), where one has a very high reflectivity and the other (the output coupler) has a slightly lower reflectivity of ≈99%. 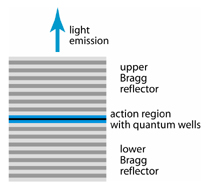 For example, electrical pumping is possible by making the DBRs from doped (electrically conducting) material and connecting them to metallic electrodes, where the top electrode has a ring form to couple out the light. A low pump threshold can be achieved with additional structures for confining the electrical current to a small area. Thousands of such VCSEL chips can be fabricated on a single wafer, and they may be packaged separately or as laser arrays.

A typical VCSEL emits a few milliwatts of output power in a circular, moderately divergent, and nearly diffraction-limited beam, which is easier to collimate (or couple into a single-mode fiber) than the output of an edge-emitting laser. Output wavelengths can vary from between 650 nm and 1300 nm for GaAs-based VCSELs or 1300 nm to 2000 nm using InP. The optical spectrum is narrow due to emission on a single resonator mode, and the output can be rapidly modulated (e.g., for data transmission with 10 Gbit/s). The active area and thus the output power are limited by the difficulty of achieving single transverse mode operation with a very short laser resonator and homogeneously pumping a large area with a ring electrode.