Although semiconductor lasers occur in a great variety of forms, some typical aspects of importance include:

Such characteristics make semiconductor lasers the most important type of lasers, technologically speaking. Their applications are extremely widespread and include optical telecommunications, optical data storage, metrology, spectroscopy, material processing, pumping of other lasers, and medical treatments. 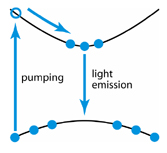 (and depleted) energy levels of the valence band, which can also be described as recombination with holes in the valence band. The photon energy is at or somewhat above the bandgap energy, and this determines the emission wavelength. Optical pumping is possible at a somewhat shorter wavelength and involves the fast relaxation of carriers in both bands. Pumping is also possible with an electrical current sent through a p-n junction; carrier recombination occurs where the p and n materials meet.

Optical gain and efficient laser operation is more difficult to achieve at high temperatures, where the carrier distributions in the two bands are more "smeared out" in thermal equilibrium. Temperature changes also somewhat affect the wavelength of maximum gain—often by roughly 0.3 nm per kelvin.

The achievable optical gain can be quite high (easily 10% in a millimeter) and in some cases even significantly more. However, the required high power density can be applied only to small volumes. Therefore, the light is often tightly confined in a waveguide structure, which also confines the carriers generating the gain. This is called a double heterostructure.