In a simple two-level system, it is not possible to obtain a population inversion with optical pumping because the system can absorb pump light (i.e., gain energy) only as long as population inversion, and thus light amplification, is not achieved. Essentially, the problem is stimulated emission caused by the pump light itself. 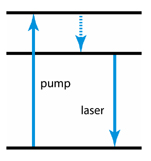 Inversion by optical pumping becomes possible when using a three-level system. Pump light with a shorter wavelength (higher photon energy) can transfer atoms from the ground state to the highest level. From there, spontaneous emission or a nonradiative process (e.g., involving phonons in a laser crystal) transfers atoms to an intermediate level, called the upper laser level. From that level down to the ground state, the laser transition with stimulated emission can occur. With sufficiently high pump intensity, population inversion for the laser transition can be reached as stimulated emission by the pump radiation is prevented by the transfer to the intermediate level.

Laser gain with a much lower excitation level is possible in a four-level system, such as Nd:YAG. Here, the lower level of the laser transition is somewhat above the ground state, and a rapid (most often nonradiative) transfer from there to the ground state keeps the population of the lower laser level very small. Therefore, a moderate population in the third level (the upper laser level), as achieved with a moderate pump intensity, is sufficient for laser amplification.