Photon detectors count photons of light. A photon detector has some surface that absorbs photons and produces some effect (current, voltage) proportional to the number of photons absorbed. 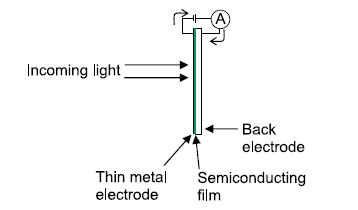 A photovoltaic cell consists of a layer of semiconductor (like selenium, Hg-Cd-Te, Cu2O, etc.) sandwiched between two metallic electrodes, with the exposed electrode thin enough to be transparent. Photons of light are absorbed by the semiconductor, forming electrons and holes that create a current proportional to the number of photons absorbed. 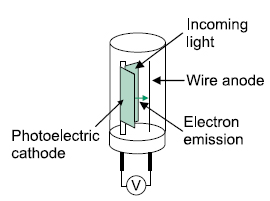 A phototube uses the photoelectric effect to generate a current from absorbed light. Light is absorbed by a metallic surface with a low work function. Electrons are emitted and attracted to a positively biased anode. Electronics measure the current, which is proportional to the number of photons absorbed.