Explanation of flare from Field Guide to Optical Lithography 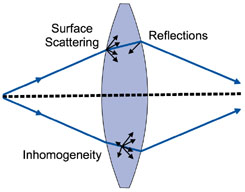 Within a lens, reflections at an interface, scattering caused by particles or surface roughness, or scattering caused by glass inhomogeneity all resultin stray light called flare. Defects such as these occur during lens manufacturing, or can arise due to lens degradation (aging, contamination, etc.).

Measuring flare is reasonably straightforward. Consider the imaging of an isolated island feature whose dimension is extremely large compared to the resolution limits of the imaging tool (say, a 100 µm square island in positive resist). In the absence of flare, the imaging of such a large feature will result in very nearly zero light energy at the center of the image of the island. The presence of flare, on the other hand, will provide light to this otherwise dark region on the wafer. The dose to clear (E0) is defined as the minimum dose required to completely remove the photoresist during development for a large open frame exposure. A related concept is the island dose to clear (E0-island), the minimum dose required to completely wash away a large island structure during a normal development process. By measuring both of these quantities, the amount of flare can be determined as

For example, if the dose to clear of a resist is 15 mJ/cm2, then an imaging tool with 5% flare would mean that a large island will clear with a dose of about 300 mJ/cm2.