Wave plates have the property that along the x-axis (called the fast axis) the x component of the field experiences a phase shift of +φ/2 and, similarly,

along the y-axis (called the slow axis) the y component experiences a phase shift of
-φ/2. The configuration for the wave plate is seen in the figure.

where φ is the total phase shift between the orthogonal components of the beam. Two forms of the Mueller matrices that are very important in polarization are the quarter-wave plate (QWP) (φ = π/2) and the half-wave plate (HWP) (φ = π): 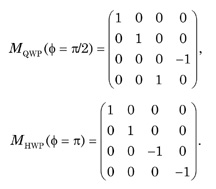 The QWP has the interesting property that it transforms L+45P light to RCP light. This is shown in the following Stokes vector calculation:

The HWP has the unique property in that it reverses the ellipticity and orientation angles of the polarization ellipse:

The orientation and ellipticity angles are expressed, respectively, for the output beam by

Comparing the elements of the Stokes vector shows that