The time average Ei(z,t)Ej(Z,t) is defined by

where T is total averaging time. Applying the time average definition to the polarization ellipse then yields the following equation:

The quantities S0, S1, S2, and S3 are the observables of the polarized field. They were introduced by Stokes (1852) and are called the Stokes polarization parameters.

The Stokes parameters are then defined in complex notation by the following equations.

where i = √−1 and * represents the complex conjugate.

It is convenient to arrange the Stokes parameters as a column matrix, which is referred to as the Stokes vector for elliptically polarized light:

The Stokes vectors for the degenerate polarization states are readily found using the previous definitions and equations: 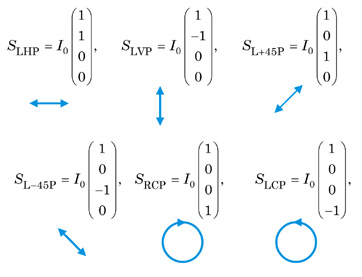 where I0 is the intensity and is very often normalized to unity.

The Stokes parameters can be shown to be related to the orientation and ellipticity angles, ψ and χ, associated with the Poincaré sphere as follows: