According to Fresnel's theory, Ex(z,t) and Ey(z,t) describe sinusoidal oscillations in the x-z and y-z planes, respectively (see the figure on p. 6). By themselves, these equations are not particularly revealing. However, eliminating the time-space propagator ωt - kz between the two equations leads to the equation of an ellipse, namely,

The figure also shows the rotated ξ-η coordinate system. Because of the amplitudes E0x and E0y and the phase δ are constant, the polarization ellipse remains fixed as the polarized beam propagates. 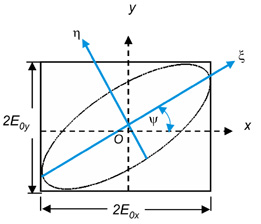 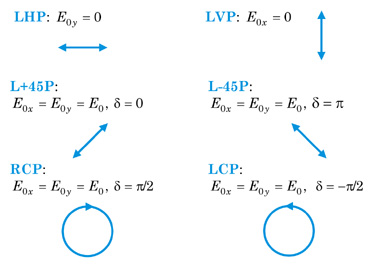 RCP light rotates clockwise and LCP rotates counter-clockwise when propagating toward the observer.

These polarization states are important because (1) they are relatively easy to create in a laboratory using linear and circular polarizers, and (2) polarization measurements as well as many polarization calculations are greatly simplified using these specific polarization states. This is especially true when a polarized beam propagates through numerous polarizing elements.

The Parameters of the Polarization Ellipse

The polarization ellipse can be expressed in terms of two angular parameters: the orientation angle ψ(0≤ψ≤π) and the ellipticity angle χ(–π/4<χ≤π/4).

These angles can be defined in terms of the parameters of the polarization ellipse:

This leads to purely trigonometric equations