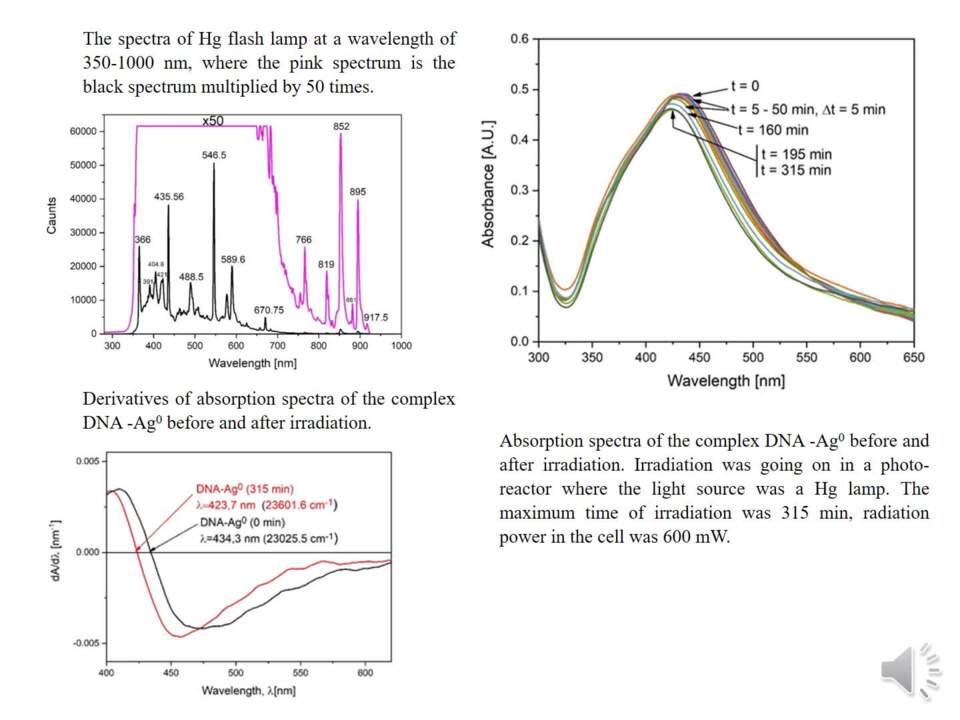 The main goal of the research is to study the catalytic properties of the DNA in the reactions of reduction of silver ions and photo-induced processes due to the unique structural properties and capabilities of molecular recognition of DNA using spectroscopic and thermodynamic methods. Reduction of silver ions (Ag+) on a double helix of the DNA is based on inter-strand crosslink formation model consisting of several adsorption processes. It is shown that inter-strand crosslink is an absorption process consisting of several simple adsorption processes and the time of this absorption process is the sum of adsorption times. The conformational transitions of DNA caused by photo-irradiation of silver atoms (Ag0) on the DNA molecule have been studied. Photo-induced desorption of silver atoms from DNA double helix is a complex and multiphase process, which, for its part, causes conformational transitions in DNA. In particular, we have two states of bonding of silver atoms the first state before irradiation and the second state after irradiation. Kinetic study of the photo-desorption of silver atoms from the DNA-Ag0 complex obtained desorption rate constant 𝑘𝑑 and adsorption heat Qa, which are kd ≅ 1.8 × 10−4 s −1 and Qa ≥ 85 kJ/M (Ag0) for silver atoms which are bound to the DNA. The oscillatory force of the DNA-Ag0 complex for a silver atom is counted to by equal to f (434.3 nm) = 0.33.

Tamar Giorgadze
Tbilisi State Univ. (Georgia)
Tamar Giorgadze works at Ivane Javakhishvili Tbilisi State University (TSU) Andronikashvili Institute of Physics as a research scientist. She is an Academic Doctor of Bio-physics (PhD) (St. Andrew The First-Called Georgian University of the Patriarchate of Georgia 2015). The areas of her interests are: Study of metal ions redox processes on DNA molecules, PAMAM dendrimers and systems with different surfaces, as well as study nanoscale fluorescence resonance energy transfer between dyes intercalated in DNA. Tamar Giorgadze is an author of 20 scientific articles.
Also in the session