Wearable devices are rapidly advancing in terms of technology, functionality and size, with more real-time applications. The disruption has already begun in health monitoring.

Wearable sensors make up one of the fastest-growing technology markets. According to market research firm International Data Corporation, total global shipment volumes of wearables reached 19.7 million units in 1Q16, an increase of 67.2 percent from the 11.8 million units shipped in 1Q15. Wearable devices are rapidly advancing in terms of technology, functionality and size, with more real-time applications, especially for health monitoring.

Photonics is an important component in these devices, especially for flexible displays and wearable biosensors. Considerable research interest is developing around wearable optical devices. For example, flexible organic light-emitting diodes (OLEDs) are now being integrated into flexible or textile-based displays. Wearable optical sensors can track multiple vital signs such as heart rate; optical chemical sensors can now measure chemical compositions of body fluids noninvasively (for example, determining blood glucose levels by analyzing human sweat). The functionality and sophistication of heart-rate monitors will continue to increase -- for example, monitoring oxygen levels and blood pressure. Other health applications for wearables include UV detection and measuring pollutant levels, both indoors and outdoors.

All of these measurements depend on networks of sensors that detect and measure a multitude of physiological and electrophysiological signals.

The hot trend right now in wearables is flexible electronics that provide better contact with skin and the natural contours of the human body. The use of conventional electronic/optoelectronic devices with human tissues can cause low signal-to-noise ratios for biosensors, because of the incomplete connection of rigid wearables with the body. "However, ultra-flexible and stretchable electronic devices utilize the low system modulus and the intrinsic system-level softness to solve these issues," says Dae-Hyeong Kim, an associate professor of engineering at Seoul National University in South Korea. "This enables light-emitting and photo-detecting devices to make very good conformal contacts on soft human tissue, an important requirement for photon-based bio-signal sensing with a high signal-to-noise ratio." 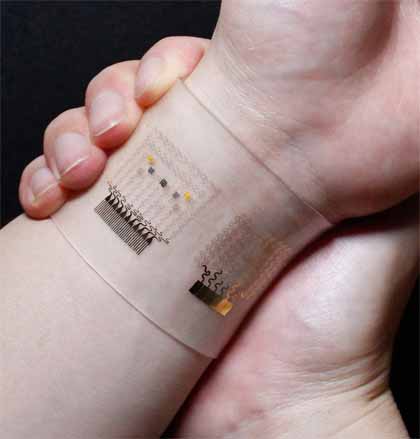 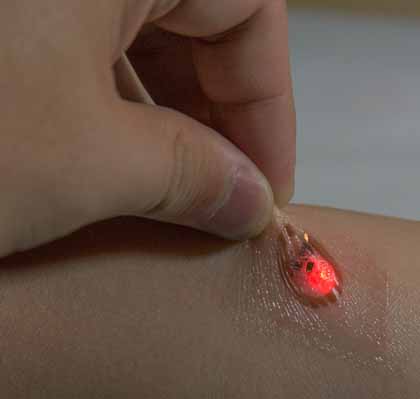 Battery-free, optoelectronic ‘tattoo', or skin-like, device for measuring blood oximetry. The system receives power wirelessly, to activate a microscale red LED and a photodetector. Measurements from backscattered light are transmitted using RF communication, using an interface that is compatible with common consumer electronic devices. Here, operation is shown while the skin is pinched, to illustrate the mechanical stretchability and robustness in the device construction. (Rogers Research Group, Univ. of Illinois Urbana-Champaign)

"As a result, stretchable electronics is a rapidly developing field," adds SPIE member Rob Shepherd, assistant professor of mechanical and aerospace engineering at Cornell University, whose research group has developed an electroluminescent skin capable of stretching to nearly six times its original size while still emitting light. Another electronic skin developed by a research team at University of California, Berkeley, led by engineer professor Ali Javey, detects pressure stimuli, the intensity of which is simultaneously displayed on an integrated array of OLEDs. Each pixel of this electronic skin consists of a pressure sensor and a thin-film carbon nanotubes-based transistor that controls the current driving a colored OLED.Thin-film electronics can also be directly laminated onto the skin. A research team at the University of Tokyo has designed ultra-flexible and conformable three-color, highly efficient polymer light-emitting diodes (PLEDs) and organic photodetectors (OPDs) to create optoelectronic skins that introduce multiple functionalities, such as sensing and displays, to the surface of the skin.

"By integrating green and red PLEDs with OPDs, we fabricated an ultra-flexible reflective pulse oximeter that measures the oxygen concentration of blood when laminated on a finger," says Yokota Tomoyuki, a lecturer at the university and member of the team. "On-skin seven-segment digital displays and color indicators can visualize data directly on the body." 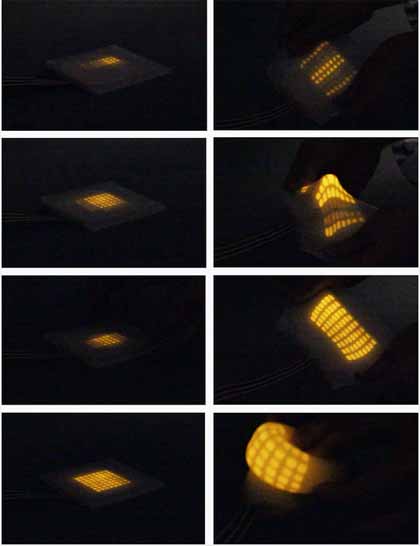 Another challenge, notes SPIE Senior Member John Rogers, professor at the University of Illinois, Urbana-Champaign, is that conventional, wrist-mounted wearables often suffer from large motion artifacts, many of which arise from motion of the light sources/sensors relative to the surface of the skin. "Emerging technologies enable similar measurement functionality but in thin, soft, ‘skin-like' forms that can integrate directly onto the surface of the skin like a thin bandage," he states. "This achieves intimate, motion-free interfaces to the skin, in ways that are non-irritating and comfortable, with dramatically reduced artifacts. The result is a reliable, continuous means for optically characterizing the skin, and underlying body processes."

A visualization technology developed at Carnegie Mellon University called "skin buttons" expands the surface area for interaction for smartwatches. Chris Harrison, an assistant professor of human-computer interaction, built tiny, low-cost projectors into smartwatches that render a fixed image on the skin at an oblique angle. "For example, a notification icon can be projected onto the skin," says Harrison. "Proximity sensors work in concert with these projectors to enable touch sensitivity, expanding the interactive region without increasing device size. Tapping a pulsating text message icon on the skin can allow users to quickly jump to that message."

There is also increased interest in using quantum dots in displays. Quantum dots have narrower band widths than organic light-emitting materials and afford thinner encapsulations. In particular, colloidal quantum dot LEDs (QLEDs) have attracted special attention for next-generation displays because of favorable properties such as printability on various substrates, ultra-thin active layers and high luminescence at low operating voltages. The big drawback for use in wearables is that QLEDs are not deformable in multiple directions. Kim's research group, however, has been able to align red-green-blue pixels with high resolutions up to 2,460 pixels per inch in flexible ultra-thin QLED arrays. "These deformable device arrays highlight new possibilities for integrating high-definition full-color displays in wearable electronics," says Kim. 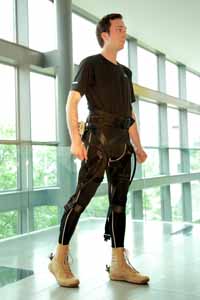 The ultimate wearable device is a soft, robotic exosuit that can help patients with physical and neurological disorders walk. Next-generation wearable robots will use soft materials such as textiles and elastomers to provide a more conformal, unobtrusive and compliant means to interface to the human body. "New sensor systems that are easy to integrate with textiles and soft components are required in order to properly control and evaluate soft exosuits," says Conor J. Walsh, an associate professor of engineering at Harvard University who is an expert in this technology. "Integrating flexible light-based sensors into these suits could be an interesting development in the future." (Exosuit image: courtesy Wyss Institute at Harvard University.)

New discoveries continue to come at a rapid pace. For example, researchers from South Korea and the U.S. have developed highly conductive and highly transparent thin films only a few micron thick that remain conductive after being stretched by up to 770 percent and after 1000 cycles of bending to a 5-mm radius. New inks are being developed that can be printed on textiles in a single step to form highly conductive and stretchable connections.

"Researchers are now mastering materials and device design approaches that enable high performance optical and optoelectronic functionality in biocompatible, soft forms that can laminate onto nearly any region of the body, for wireless, continuous capture of data essential to health monitoring and disease state diagnostics," says Rogers.

Wei Gao, a post-doc student who is part of Javey's research team at UC Berkeley, is most excited by the potential of optical chemical sensors for health monitoring. "These can real-time measure the important biomarkers in body fluids noninvasively and provide users with their physiological and clinical information," says Gao. "Most wearable skin sensors can only track physical activities and vital signs such as heart rate. Chemical sensors tell us more health-related information at molecular level. The combination of the cellphone and optical chemical sensors for health monitoring will take the wearables to a new level."

Harrison believes too many people think health is the "killer app" for wearables. "It's a perfectly fine application, but's there are so many more interesting avenues," says Harrison. "A device resting on the skin and being ‘out in the world' affords many things a phone in a pocket or laptop in a bag cannot sense: things like sensing social context, and fine-grained activity recognition. And the fact it's also glance-able makes it far less socially obtrusive, perfect for lightweight contextual information." 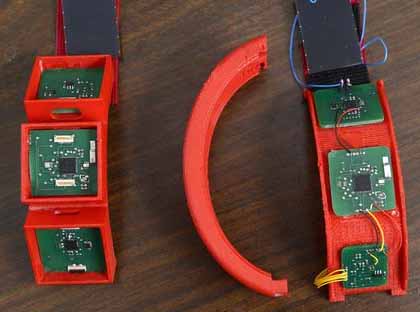 The prototype three-piece sensor pods connect together to wrap around the wrist of the patient to monitor movement, heart rate, respiratory rate, the amount of oxygen in the blood, skin impedance and wheezing in the lungs. (Source: NCSU)

A decade-long development effort to pair a wrist-worn wearable with a chest patch and a handheld breath analysis unit is coming to fruition. The effort involved as many as 40 researchers and will monitor a patient's health and the environment simultaneously.

The wearable Health and Environmental Tracker (HET) aims to anticipate, for instance, an oncoming asthma attack and recommend immediate action to thwart the event. Researchers hope that eventually, most any chronic malady can be similarly addressed by such sensor-studded wearables powered by energy harvested from the patient's own body. To address this issue, the National Science Foundation is funding the Advanced Self-Powered Systems of Integrated Sensors and Technologies (ASSIST) project with up to $40 million.

The HET project, currently in its fourth year, now has its first functional prototype (above), with which it plans to begin human trials soon, starting with asthma. The work is being done at the National Science Foundation's Nanosystems Engineering Research Center for ASSIST at North Carolina State University. The plan is to transmit the data from the wearable health monitor to the user's smartphone so it can be sent to doctors, as well as evaluated immediately to issue warnings to users as well as suggesting strategies for heading off a health crisis, such as an asthma attack, before it happens.