Under Lock and Key: The Intersection of Cancer Research and Photovoltaics

Artist rendering of a "lock and key" biosensor

Some may see Fatima Toor's diverse research interests as eclectic: photovoltaics, biosensors, lasers, and semiconductor optoelectronics may not seem to have much in common at first blush. But Toor, who is a professor of electrical engineering at the University of Iowa, doesn't see it that way. From her perspective, her work on laser therapy is a close cousin to her research into photovoltaics.

"It's pretty synergistic," she says. "Photovoltaics are light detectors. You basically detect light to generate power, whereas lasers, you inject power and get light out. A lot of these things are very interrelated when it comes to devices."

Toor's synergistic approach and broad interests uniquely enable her to explore applications of nanofabricated photovoltaics, her area of primary expertise, in the field of biomedicine. Although new to biophotonics, Toor has received a lot of support from medical colleagues at University of Iowa. "I'm an electrical engineer, so I need them to explain the biology part," she says. "They're very patient with me."

It's clear that Toor is a quick learner. In addition to exploring laser therapy for sarcoma, she recently designed a biosensor that can detect cancer antigens in real time from blood samples.

The sensor is based on a "lock and key" design, whereby the presence of one thing triggers a response in the presence of another thing. In the case of the biosensor, the key is represented by a specific antigen, such as bacterium, toxins, or—in Toor's research—a type of cancer cell; and the lock is represented by antibodies, the proteins in our blood that bind to harmful antigens.

Because blood screenings for prostate-specific antigen (PSA) are already routine, prostate cancer was an easy place to start. Toor began by using metal-assisted chemical etching to produce a solar cell composed of millions of vertically oriented nanowires on a silicon wafer. To those nanowires are anchored antibodies for PSA. When blood passes through the device—which is less than two inches big—any PSA present in the blood sample binds to the antibody-coated nanowires, completes the circuit (opens the lock) and produces an electronic charge. The solar cell becomes a transducing element. 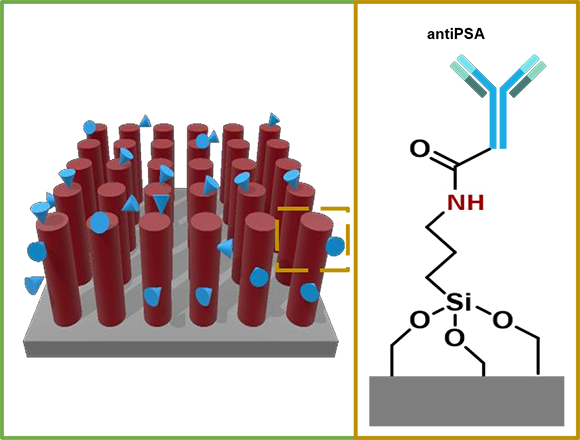 The device was a success: it could reliably and quickly detect PSA in blood samples, and moreover, it could be done cheaply. Toor's method of producing the chemically etched solar cells doesn't require the expensive and highly specialized equipment required to create other types of silicon nanowires, so these "bio-padlocks" could possibly be manufactured at scale.

"It's called a lock and key mechanism because it's not just sensitive, it's also selective," explains Toor. "Not everything is going to attach to that anchor."

The device's selectivity is an important function that lends itself to other applications. By changing the selectivity, you have a new application. Her team is next investigating whether the sensor can be used to detect lung cancer, one of the most prevalent types of the disease.

However, before going too far down the road of iteration, Toor wanted to make sure there was a real use for this device. If it could detect cancer early, would that even be helpful? To answer that question, Toor and her co-investigator Marcie Black of Advanced Silicon Group applied for and received an I-Corps grant from the National Science Foundation to investigate the commercial potential of a nanowire biosensor platform. "They give you $50,000 to do customer discovery to figure out if anyone is going to care about your technology once you develop it," says Toor. "It was very useful."

This research was valuable because she and Black learned that their initial concept of using a biosensor for early cancer detection was not of interest to the physicians they interviewed. While they agreed that early detection is important, the doctors explained that a biosensor is not going to replace the tests traditionally used to diagnose cancer or begin a treatment. "No one is not going to do a biopsy," she says. What physicians really wanted, she learned, was an at-home, point-of-care disease monitoring tool.

Right now, when someone is diagnosed with prostate cancer and begins treatment, he has to routinely come into a blood lab and have a sample drawn to check levels of PSA, and then wait days—or even weeks—for the test to be processed. It can be a couple of weeks before a doctor knows if a therapy is having a positive effect just because of the lag in testing, and that delay, Toor says, is significant. The physicians she interviewed wanted their patients to be able to monitor their PSA level at home and get the results instantly. "So we pivoted to focus the device on disease monitoring," says Toor, who is currently going down the slow road of studies and trials with an end-goal of eventual commercialization for the device.

This adaptability is one of Toor's hallmarks. These days, not content to confine her sensor to the sphere of biomedicine, Toor's team is exploring how the device might be used as an environmental sensor to detect contaminants in waterways.

The state of Iowa has a lot of problems with water quality, many of them a byproduct of industrial-scale farming. Nitrogen and phosphorous fertilizer runoff from fields of corn and soybeans, for example, can trigger algal blooms in still waters like lakes and bays. And hormones like estrogen, used to stimulate milk production on dairy farms, can find their way into rivers and streams, which can affect reproductive development in wild animals. High levels of estrogen exposure have also been linked with breast cancer in women and prostate cancer in men.

In order to monitor the various water contaminants, Iowa's Department of Natural Resources has deployed water quality sensors across the state to inform decisions about protecting its water resources, and Toor thinks that an estrogen detection lock-and-key device patterned after the cancer-detecting biosensor could be one more arrow for their quiver. An estrogen receptor could be anchored on the nanowires of the solar cell, instead of an antibody, and the presence of estrogen in water would trigger an electrical charge and give a positive result.

While Toor prepares a publication on the estrogen detection device, she continues to pursue her interests in photovoltaics, nanomaterials, lasers, and biophotonics, and to show her students how to find synergy where it's not immediately obvious. "My favorite part of being in academia is that you have so much intellectual freedom," she says. "As long as you're getting funded, you can work on what you want." Lucky for us, she wants nothing less than a better, healthier world.