TESS: One Year Out

The Transiting Exoplanet Survey Satellite has expanded our understanding of new worlds close to home, and exploding stars beyond our galaxy
19 August 2019
By Karen Thomas
Technology

In late July, nearly 300 planet hunters and scientists met at MIT to hold the first TESS Science Conference to share their findings and experiences with the Transiting Exoplanet Survey Satellite or "TESS." The conference coincided with the beginning of the planet-hunting mission's second year of operation in space.

TESS, an MIT-led, NASA-funded, Explorer-class planet finder, spent its first 12 months in orbit using four wide-field cameras to map 13 sectors encompassing the celestial southern hemisphere. A couple of weeks before the conference, TESS had flipped to begin observing the northern hemisphere. As the conference began, TESS was pointing at the Kepler mission's original star field.

NASA's earlier Kepler mission kept its telescope constantly fixed on one small section of the sky during its prime mission, with the goal of determining the frequency of exoplanets. TESS is looking for candidates closer to home, while covering an area about 350 times larger than what Kepler covered. At the end of its two-year mission, TESS will have covered more than 85 percent of the sky, cataloging thousands of exoplanets, ranging from small, rocky worlds to giant planets.

Launched in April 2018, TESS is the first spaceborne mission to search nearly the entire sky for exoplanets. TESS's mission is to survey the brightest stars for transiting exoplanets as they pass in front of their home star, causing its brightness to dim. Tell-tale drops in the brightness of a star indicates an orbiting planet regularly transiting across the face of a star.

The primary goal of TESS is to identify a large sample of small planets and measure their sizes. Where feasible, follow-up observations with current and planned telescope missions can be made to determine mass. With these measurements, researchers can determine the planets' densities and start to understand what these planets are made of. This work will provide a foundation for future missions in the search for potentially habitable planets.

After TESS' launch, George Ricker, TESS principal investigator at MIT's Kavli Institute for Astrophysics and Space Research, noted that the survey would be fast. "One critical piece for the science return of TESS is the high data rate associated with its orbit," said Ricker. "Each time the spacecraft passes close to Earth, it will transmit full-frame images taken with the cameras. That's one of the unique things TESS brings that was not possible before."

Since its launch, TESS have been making discoveries — and headlines — by not only finding exoplanets as it was designed to, but also observing comets and exploding stars.

Even before beginning the hunt for planets, TESS had tested its cameras by making observations, such as spotting fluctuations in light from the star Beta Pictoris, some 63 light years away. These patterns were later recognized as the signatures of three comets passing in front of the star.

TESS has also imaged a dozen supernovae, sometimes capturing the evolution of the cosmic blast over days or weeks, providing valuable data for astronomers. The cameras can catch these explosions from their very beginning, often before ground-based surveys have identified them. TESS has also detected about 800 or so stellar flares around other stars, similar to the solar storms on our Sun that cause electromagnetic problems on Earth.

In April 2019, astronomers announced the discovery of TESS' first Earth-sized exoplanet — listed as HD21749c. Orbiting relatively close to its star, this world is probably too hot to support life, but it proved TESS' ability find small planets closely orbiting their stars. TESS has since found several multi-planet systems where small planets orbit nearby stars. Many of these are not in a habitable zone but scientists are learning more about the wide range of planets that exist. 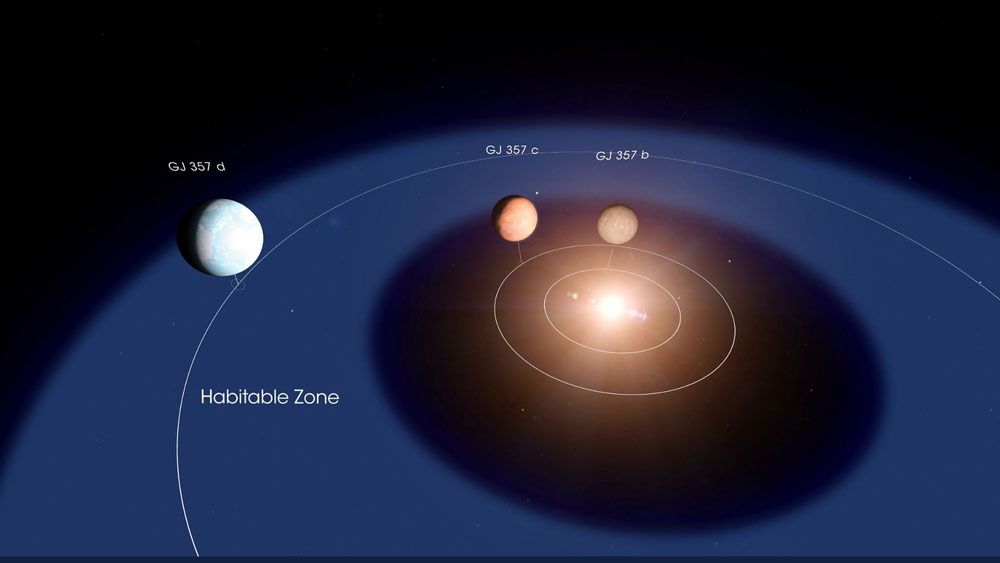 An illustration of the 3 planets around a star known as GJ 357. Credit: NASA

In July 2019, as astronomers rushed to confirm the discovery of a planet orbiting the star GJ 357, they found two more planets. Of particular interest is GJ 357d, just 31 light years away, and possibly twice the size of Earth. GJ 357d receives as much energy from its star as the planet Mars does from our Sun. If it has a rocky surface and a thick atmosphere, there's a possibility it may also have water.

The TESS mission has been extended through 2022, with options open for further extensions. Results from the extended mission will include information on long-period planets and identification of more habitable-zone planets and multiple-planet systems. TESS scientists are already collaborating with ground-based astronomers for follow-up studies. George Ricker is looking forward to bringing in more scientists and overlapping TESS findings with current and upcoming missions, such as CHEOPS and JWST.

"The pace and productivity of TESS in its first year of operations has far exceeded our most optimistic hopes for the mission," said Ricker. "In addition to finding a diverse set of exoplanets, TESS has discovered a treasure trove of astrophysical phenomena, including thousands of violently variable stellar objects."

At this writing, TESS has discovered 21 planets and more than 850 candidate exoplanets. Keep an eye on the skies — and the news. TESS is still discovering more. By the time you finish reading this article, some new astronomical wonder may have been found.

TAGS: Astronomy, Remote Sensing
Recent News
Competing for space
Communications industry in the time of COVID
Volunteering: Nothing to lose, much to gain
Community