Shining a Light on the Eye of the Hurricane

As the Atlantic hurricane season approaches fast, Doppler wind lidar is poised to deliver the life-saving data that other technologies cannot
01 July 2019
By Rebecca Pool
Technology

As Hurricane Lane, the wettest tropical cyclone on record in Hawaii, barrelled towards the Aloha State in August 2018, US National Oceanic and Atmospheric Administration scientists were readying for a critical mission.

Lisa Bucci and Kelly Ryan were part of an all-female science crew flying aboard one of NOAA's Hurricane Hunters, set to gather data from within the storm itself. Hurricane Lane had formed from a region of low air pressure off the southern coast of Mexico, and crossing the Central Pacific Basin was on course for Hawaii, reaching catastrophic category 5 proportions and generating 160 mph wind speeds.

Although the NOAA scientists were scheduled to fly some 10,000 feet high in Earth's stormy lower atmosphere and directly into the eye of the storm, they were not fazed.

According to Ryan, "Flights tend to last up to nine hours, and we really get right into the thick of the storm, so we lose a few coffee cups along the way...but the data we collect helps us to understand the storm's physical processes and improve future hurricane forecasts."

For NOAA's National Hurricane Center, this is what it's all about. During hurricanes, its high-flying meteorological laboratories have typically relied on dropsondes fitted with a GPS receiver and sensors, as well as tail Doppler radar and fuselage radar systems and stepped frequency microwave radiometers, to detect atmospheric changes from the outer rim of the storm to the eye. 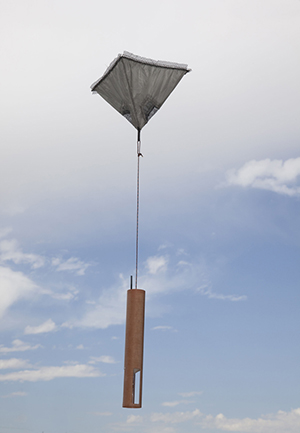 Dropped one by one from the aircraft, around 20 dropsondes per flight transmit pressure, humidity, temperature, wind direction, and speed measurements back to the plane while plummeting towards the sea. At the same time, radar systems scan the storm, providing real-time data on precipitation velocity and intensity. In addition, microwave radiometers measure over-ocean wind speed and rain rate, pointing to potentially deadly storm surges.

While Doppler radar emits microwaves and receives the signal scattered from precipitation to determine motion and intensity, it doesn't work if it isn't raining. This poses clear problems for precipitation-free areas such as a tropical cyclone's boundary layer just above the ocean surface, as well as the ‘moats' or light rain regions between its swirling eye-wall and outer spiralling rain bands.

But lidar can help. Instead of using water particles to scatter its receiving signal, Doppler wind lidar relies on the motion of aerosols, which is measured by the Doppler shift of the backscattered return pulse along its laser beam. Indeed, as Ryan points out, "A lot of aerosols exist close to the ocean surface so we can get a lot more information from lidar here."

And although dropsondes provide data in the precipitation-free regions that radar can't touch, lidar covers a much broader area, providing a continuous stream of data throughout the storm. Both Bucci and Ryan are excited.

Right now, their raison d'être at NOAA is to assimilate more and more lidar data into the organization's numerical models to improve hurricane forecasts. "Every time you kick out a dropsonde it costs around $700," says Ryan. "But with lidar we can [affordably] access new regions of data to really get to some of the questions that we just couldn't before."

Bucci recalls how lidar provided some key information during a 2016 flight. "Back in Hurricane Earl, we flew along a developing rain band and we could see how the wind increased as we went from the coast of Venezuela up into the north-east quadrant of the storm," she adds. "We just couldn't resolve this with the radar, so it was pretty cool."

Bucci and Ryan are hardly alone with their passion to measure hurricane processes with Doppler wind lidar. Dave Emmitt, president of Simpson Weather Associates, has worked with NOAA and other organizations on lidar projects for many years.

As early as 2008, he was flying through typhoons around Guam, a tiny island in the western Pacific Ocean, using lidar to augment radar and other standard measurements. And more recently, he was instrumental in setting up the lidar system that flew through Hurricane Lane on the NOAA Hurricane Hunter.

According to Emmitt, NOAA, NASA, and the US Navy all use airborne lidar for hurricane research, although NOAA is the only US-based organization working with the data for weather forecasting. "Lidar is so important for providing wind profiles where radar can't, and also for taking measurements near the ocean surface where a lot of the energy exchange between the water and hurricane is taking place," he says. "We've been striving to do this for many, many decades without the proper tools, but now we can visualize and quantify [cloud] structures within the boundary layer with lidar, and it's so exciting."

The Doppler wind lidar, developed by the US Army and used by NOAA aboard a Lockheed WP-3D Orion turboprop aircraft, comprises a laser and receiver, housed together within the transceiver, as well as a scanner and data processing system. The lidar system measures line-of-sight wind wherever its beam is pointed and operates at an eye-safe 1.6 micron wavelength with a low pulse energy of 1 mJ and pulse frequency of 500 Hz.

During flight, the system can take measurements from around the aircraft as close as 0.4 km and up to 25 km into the storm, depending on the amount of aerosol backscatter.

"The real secret to NOAA's system is its scanner, which actually sticks out of the side of the aircraft and allows us to point the beam up and down," says Emmitt. "It can be a huge challenge on an aircraft to scan the lidar beam in different patterns to derive your full wind profile—you really do need several perspectives to get this data.

"But we can do this with the NOAA scanner and it's been really critical to achieving our wind profiles," he adds. "For example, the aircraft usually flies at around 10,000 feet but we can ‘look up' and retrieve profiles from deep within a hurricane." 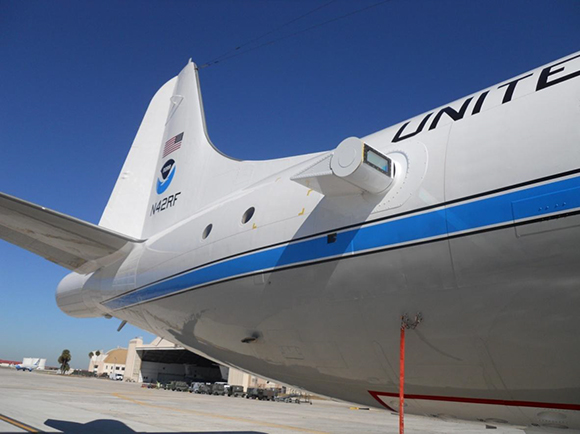 Doppler wind lidar scanner on the side of NOAA's Hurricane Hunter. Credit: NOAA

Bucci and Ryan concur, pointing out how recent lidar data from Lane as well as other hurricanes and tropical storms, including Danny, Erika, Earl, Javier, Maria, and Nate are helping them answer questions about hurricanes that have remained unanswered for years. For example, they are now getting closer to understanding how energy from relatively small-scale turbulence at the ocean surface, known as surface flux, can energize a hurricane.

And, in a similar vein, while high vertical wind shear typically causes a hurricane to become asymmetric and then dissipate, this isn't always the case, as witnessed during the deadly Hurricane Florence that hit the coast of the Carolinas in 2018.

"We can now begin to understand [such observations] with lidar as we can measure more of a storm than with radar alone," says Ryan. "These are some big questions that definitely have the potential to be answered now that we're using lidar."

Indeed, over the years, NOAA researchers and colleagues have worked tirelessly to prove that the airborne Doppler wind lidar is mechanically sound and provides viable data. As recently retired NOAA Atlantic Oceanographic and Meteorological Laboratory Director Bob Atlas points out, "We have found definitively that Doppler wind lidar complements the other observing systems on the aircraft and is able to fill in the gaps that we otherwise would have here."

What's more, Atlas is certain the technology will be instrumental to future hurricane research. A lack of frequent and accurate observations of the winds within hurricanes has contributed significantly to inaccurate forecasts, but thanks to lidar, this is changing. "We don't have all of the data right now, but lidar is helping," says Atlas.

Importantly, Ryan and Bucci are confident they have validated the technology after collecting and comparing vast swathes of data against dropsonde and radar measurements. During flight, lidar collects several gigabits of data an hour, so for the researchers a next critical step is to refine the algorithms that process this raw data.

After processing, the highest quality wind profiles can then be transmitted in real time to the forecasters at the National Hurricane Center, already working with dropsonde and radar data. "We really want to make this data available in a format that can be assimilated by our numerical models and used for further analyses," says Ryan.

Looking to the imminent 2019 hurricane season, the NOAA researchers want to experiment with new flying patterns so they can continue to collect data from within uncharted hurricane territory.

"In the past, the plane has been flown in predetermined patterns defined for radar, but with the lidar, we are now going to try flying along cloud-free, rain-free regions," says Ryan. "Radar can still collect data as we go along such a region, but the lidar can also collect data where the plane is as well as within the rain-free region. So we are getting this new, complementary coverage."

For Ryan and Bucci, the next Atlantic hurricane season can't come soon enough. Typically running from June to November, they will take to the skies in July this year, and they expect to fly in around eight storms throughout the season. As Bucci says, "We love everything about hurricanes and the lidar data helps us to understand a storm's physical processes so much more as we are seeing things that we haven't seen before... I got into meteorology to understand when and where dangerous weather would happen and how to stay safe." 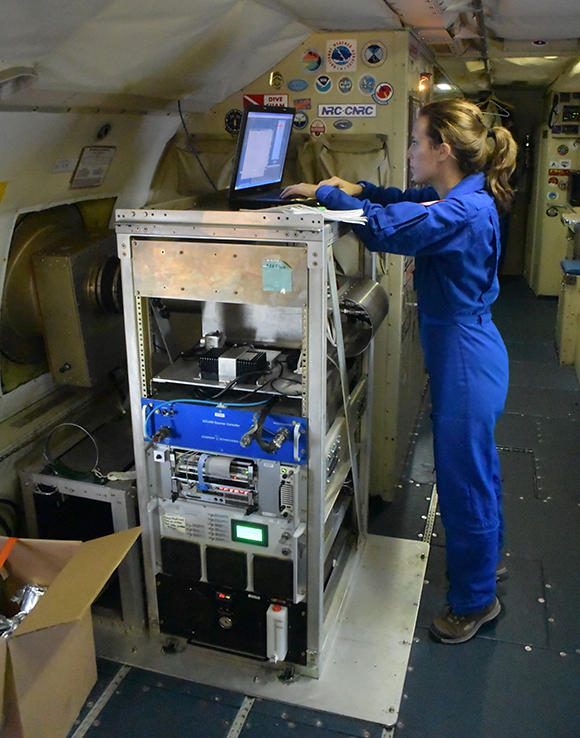 But the story for NOAA, lidar, and hurricanes doesn't end here. Talks are already underway at NOAA to fit a second lidar system to its Gulfstream IV jet that flies higher than its Lockheed turboprop aircraft. The Gulfstream IV would collect data from the upper atmosphere.

However, Atlas envisions lidar reaching even greater heights. Following in the footsteps of the European Space Agency, he would like to see a satellite-borne lidar, which he says would provide a much larger coverage to truly define a hurricane and its environment.

Emmitt concurs. As he points out, he and Atlas have already carried out numerous simulations of wind lidar in space that sought to assess the impact of such an instrument on hurricane forecasts.

"I don't think we need to justify the need to make wind measurements from space anymore. If we were some 400 km in orbit, we could detect the presence of cyclones starting up and also predict where they were going to go and how intense they may be," he says. "In short, we'd have a much better chance of detecting and predicting the many, many cyclones that develop all over the world."

-Rebecca Pool is a science and technology writer based in Lincoln, United Kingdom.