A submersible vehicle emits a blue LED light to send information to the surface during the Nekton First Descent expedition. Credit: Nekton

The world has an enormous appetite for communication bandwidth, which means that we're all competing for access to the radio frequency (RF) spectrum. Wireless gadgets from smartphones to smart kitchen appliances all jostle for bandwidth, and broadband connectivity has become a passport for education and commerce.

In the 1920s, the Federal Radio Commission (the predecessor to today's Federal Communications Commission) recognized a need to regulate bandwidth availability in the United States, so legislation that licensed bands of the RF spectrum to different regions was passed, guaranteeing the licensee interference-free communication over those wavelengths. But some bands go unused today, while others are completely overwhelmaed.

Radio frequency communication has been used in space communication since the Soviet Union launched Sputnik in 1957, and the rate of data transfer has been sufficient for low-bandwidth deep-space communication. During the Apollo 11 mission to the moon, Neil Armstrong was able to transmit his historic "one step" speech to Earth with just a 1.25 second delay.

While the technology surrounding radio transmission has remained fairly static since the early days of the space program, the quantity of data we're able to collect on space missions has increased exponentially. The radio frequencies are simply not adequate for transmitting large amounts of data from deep space back to Earth without using a prohibitively large terminal.

Unlike radio bands, the optical bands of the electromagnetic spectrum are unregulated, and they, too, can carry a signal. Laser beams are also much, much smaller than radio beams, which makes lasers uniquely capable of transmitting high data rates. Since the advent of the laser in the 1960s, optical engineers have been exploring the potential of optical communication. Every part of a radio communication system has a direct correlation in an optical system, such as a source, receiver, amplifier, and modulator.

NASA quickly recognized the tremendous potential of laser communications (lasercom) for space missions, and asked a research group at MIT Lincoln Laboratory to build a Lunar Laser Communication Demonstration (LLCD) to prove the concept. Lincoln Lab program manager Don Boroson was the principal investigator for the LLCD. "We wanted to show that it was not only possible, but feasible, to send high-data-rate communications on a laser from a spacecraft that was near the moon to a ground telescope on Earth, while keeping the space and ground terminals smaller than their radio counterparts," he says. 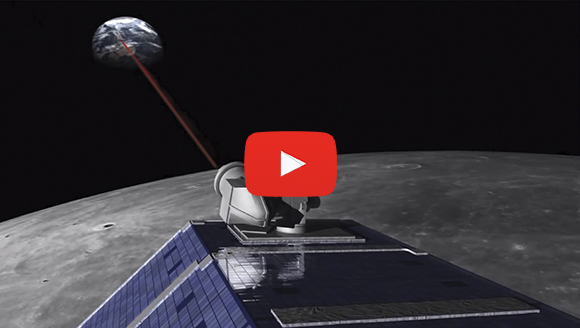 Their team succeeded. In 2013, the LLCD flew as a payload aboard NASA's Lunar Atmosphere and Dust Environment Explorer (LADEE), and the ground-based telescope was able to sustain a laser link with LADEE for up to 30 minutes per orbit, which proved to be more than enough time to transmit large quantities of data at high rates, and in a wide variety of orbital and atmospheric conditions. They achieved error-free uplinks at 20 Mbps, and downlinks at a blazingly fast 622 Mbps.

To put those speeds in perspective, 622 Mbps would allow you to download your average 1 GB "The Earth is smaller than my thumb!" video from lunar orbit to Earth—a distance of more than 380,000 kilometers—in about 13 seconds. This amount of data would take days to transmit via the LADEE radio link.

The LLCD team had to learn how to control for clouds and weather, which could potentially interrupt the laser beam. They handled the inevitability of cloudy skies in two ways: by using a fast reacquiring system that uses a repeat-request protocol—useful for delivering data despite intermittent clouds—and by preparing alternate ground terminals should the atmosphere in one location prove obstructed. "Each lunar orbit we had the opportunity to choose, at the last minute, the terminal with better cloud conditions," says Boroson.

This successful demonstration of lunar lasercom convinced NASA that this technology was what they were looking for, and NASA subsequently developed the Laser Communication Relay Demonstration satellite, which will launch to geosynchronous orbit on a two-year test mission sometime in 2019. MIT Lincoln Laboratory is now helping NASA develop a variety of other laser communication systems, including laser terminals for the International Space Station and the Orion manned space capsules.

Underwater optical communication is not a new idea, but it has recently reached a significant commercial milestone: in March of this year, the world's first live video was optically transmitted from an untethered submersed vehicle off the coast of Seychelles in the Indian Ocean and broadcast to audiences around the world using UK-based Sonardyne's LED optical communication system, BlueComm.

The real-time video broadcast was part of the Nekton Deep Ocean Research Institute's First Descent Expedition, which intends to increase understanding about one of the world's least-explored oceans. Very little research has been conducted beneath scuba-diving depth—about 30 meters—in the waters around Seychelles. This new expedition intends to explore the Bathyal Zone, which is at a depth of 200-3000 meters, and is home to the greatest marine diversity.

In an article for Sky Ocean Rescue about the expedition, Nekton mission director Oliver Steeds noted, "I think we have been looking up when we should have been looking down. We have had this great era of space exploration and that has pushed back the frontiers of our knowledge. But the deep ocean is the last great frontier, the last great piece of our planet that we still don't know about."

Two more hour-long live broadcasts from the Indian Ocean followed the first, allowing viewers to share the same excitement as the scientists as they explored underwater habitats, all using BlueComm's light-based communication platform. 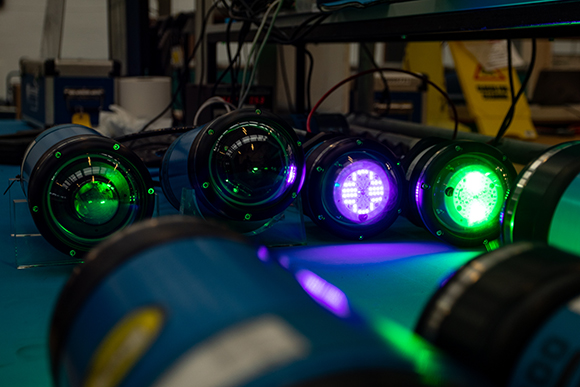 Ultraviolet and green BlueComm lights as used in the Nekton mission. Credit: Sonardyne

Traditional underwater communication relies on acoustic waves, which transmit at very low data rates, especially at long ranges. But only light waves can support the bandwidth needed to transmit high-res video like the one broadcast from the waters of Seychelles.

For one thing, water absorbs and scatters light a lot more than atmosphere, which is a nearly lossless medium. And, whereas infrared wavelengths transmit well in the atmosphere, the long wavelengths of infrared light do not transmit at all in water. Only blue and green wavelengths, from approximately 430 nm (in clear water) to 570 nm (in turbid water) can transmit, so telecom technology that has been developed for infrared wavelengths can't be repurposed.

Adding to these complications is the matter of location. Star trackers and GPS technology allow easy coordination between ground telescopes and satellites—one of which is firmly anchored to the ground, and the other of which is in motion in a predictable pattern, like orbit. But GPS doesn't work underwater, so getting the transmitter to locate the receiver can be a challenge—especially if both of them are independently in motion.

BlueComm has approached these challenges by utilizing blue LEDs in the 450 nm region of the spectrum. The light is transmitted in a broad array, so the receiving terminal only needs to be in the general area to pick up the spreading signal. The downside to the LED array is that the beam's divergence drastically reduces the data rate that can be supported by the beam. BlueComm can transmit a maximum of 10 Mbps up to 150 meters—a little less than a tenth of a mile.

Although Sonardyne's LED-based BlueComm system has already proven a commercial success, the MIT Lincoln Laboratory group who worked on the LLCD for NASA envisions a next generation of underwater optical communication. Specifically, they think it's possible to transmit gigabyte data rates over several hundred meters in open ocean. Instead of using LEDs, they're going to do it using narrow-beam blue/green lasers and highly sensitive receivers.

Nicholas Hardy, who is on technical staff with the Undersea Optical Communications Group at Lincoln Lab, spent the last two years developing an underwater lasercom system that could pull this off, and he presented the results of their underwater lasercom demonstrator project at Photonics West 2019.

Knowing a vehicle's precise location underwater to establish the link is the first challenge of any optical system, and it's particularly challenging when the light source is a highly focused laser beam, which needs to find and focus on a small target. Anyone who has tried to hold a laser pointer still on a slide can sympathize with the problem. To optically create a link without help from an acoustic signal, the Lincoln Lab team found that it's best to precoordinate the vehicles to rendezvous at a certain depth. Then, it's easy to scan out a line at that depth to look for the other vehicle—much easier than conducting a three-dimensional search when neither depth nor positional information is known. 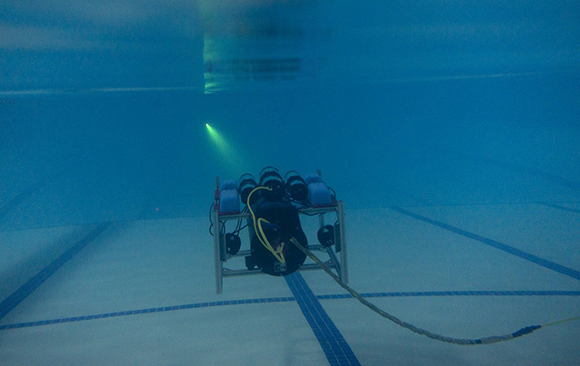 Two ROVs tracking each other and communicating with the laser link in a test pool near Lincoln Labs. Credit: Proc. SPIE

Once that communication link is established between the laser transmitter and the receiver, data transfer can begin immediately. Of course, the ocean isn't a vast prairie of watery space; features like terrain and even marine life can interfere. Hardy recalls that during one of their very first harbor tests, a swarm of small jellyfish swam right through the beam, but they were still able to communicate through it. "But bigger things like a fish will probably break the beam," he conceded. In that scenario, the vehicles would automatically begin a reacquisition sequence, first trying to find each other's last known location, then engaging search-and-scan mode to re-establish the link.

In addition to the occasional parrotfish, one of the real killers in underwater optical communication is solar background light. Light in the visible spectrum scatters a lot in water, making it difficult for LED systems to do any communications near the surface in the daytime. The Lincoln Lab underwater lasercom system solved this problem by filtering out nearly all background light so that it doesn't reach the photon detector. By only receiving photons from within a very narrow range (a few milliradians), the system can be operated near the surface during the day—a flexibility that will be key for many operations.

From Outer Space to Undersea

The team at Lincoln Lab was able to develop the underwater lasercom system in just two short years by utilizing commercially available parts and building on their earlier expertise from the LLCD platform for space communication.

According to Boroson, "We just saw an opportunity. We thought that some of the pointing capabilities and our knowledge of very efficiently digging data signals out of weak optical signals would be relevant, so we turned our attention underwater."

That's a transition that's not uncommon to astronomical engineers, since a water environment is frequently used for testing processes and equipment prior to space missions. NASA even has a replica of the International Space Station immersed in a large swimming pool in Houston, Texas, where astronauts like Scott Kelly suit up in space suits to execute training exercises.

As for the transition from space lasercom to underwater lasercom, Hardy says, "A lot of the general analysis of how you do the systems and systems architecture is the same. Which is why when we went from space to undersea, we could do it very quickly."

The advent of underwater lasercom is exciting news, worthy of being broadcast on every wavelength.

-Gwen Weerts is the managing editor of SPIE Professional.