Hubert "Buddy" Martin from the Steward Observatory and University of Arizona wins the 2019 A. E. Conrady Award in Optical Engineering.
01 October 2019

Great discoveries in astronomy are often associated with scientists who spend nights at the telescope and write scholarly articles presenting their observations. Behind many of these discoveries are scientists and engineers who build the tools that enable those observations. The creative contributions they make-the result of long days, many blind alleys, and flashes of brilliance-are sometimes overlooked.

Hubert M. "Buddy" Martin, a project scientist at the Steward Observatory and associate research professor of optical sciences at the University of Arizona (UA) is considered by many of his colleagues to be one of those scientists whose life-long work has enabled others to pursue their scientific goals and make breakthrough discoveries in astronomy.

In recognition of his work, Martin is the 2019 recipient of the SPIE A. E. Conrady Award in Optical Engineering. The award recognizes Martin's exceptional contributions in design, construction, and testing of optical systems and instrumentation.

"Optical and telescope designers tend to receive more of the limelight than makers, but without Buddy's proven ability to complete very large aspheric mirrors to exacting tolerances, some of the most powerful new telescope designs would have been impossible and not seriously considered," says Roger Angel, Regents' Professor of Astronomy and Optical Sciences at UA.

"He has been central to the string of advances in design, fabrication methods, metrology, and analysis that have allowed the lab to constantly improve its ability to make the largest and most aspheric optics ever. As I understand, these are exactly the kind of contributions the Conrady award is set up to recognize."

The SPIE A. E. Conrady Award is presented annually in recognition of exceptional contributions in design, construction, testing, and theory of optical and illumination systems and instrumentation. Martin received the award at SPIE Optics + Photonics in August 2019, where he also gave a plenary talk on advances in telescope mirror technology. 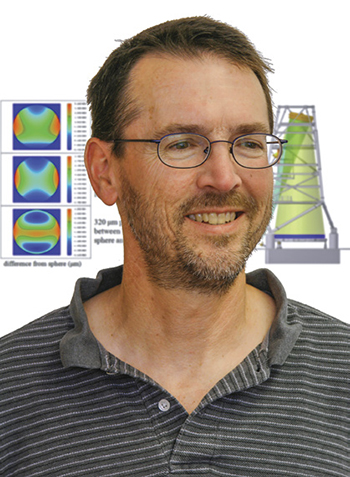