Affordable Photovoltaic Technology at the Nexus of Energy and Water

Recent drastic cost reductions in the photovoltaic industry driven by technical innovations and oversupply have led to an enormous increase in solar power deployment around the globe, enabling access to electricity for the developed and developing world.
01 July 2019
By Fatima Toor
Technology

An Agariya family at their temporary shelter in the desert area of Little Rann of Kutch, where newly installed solar panels are used to lift ground water with the help ofa motor to cultivate natural salt. Credit: Sudipto Das

Recent drastic cost reductions in the photovoltaic (PV) industry driven by technical innovations and oversupply have led to an enormous increase in solar power deployment around the globe, enabling access to electricity for the developed and developing world.

According to the 2019 International Technology Roadmap for Photovoltaic (ITRPV), the sale price of PV modules has been decreasing exponentially for the past several years due to both technology innovations across the PV value chain, and, since 2015, due to oversupply in the industry because of increased manufacturing capacity expansions in China.

Watt peak (Wp) is the value that specifies the output power achieved by a solar module under full solar radiation. Average spot market prices of monocrystalline silicon (c-Si) and multicrystalline silicon (mc-Si) modules at the beginning of 2019 were 0.24 US$/Wp, down from 0.60 US$/Wp in 2015, a drop of 60% in module price in a matter of just four years.

This significantly fast reduction in price has enabled an exponential growth in PV deployment around the globe. In terms of PV installations, Asia leads, followed by the Americas, Europe, and Africa.

The target of the Paris Agreement is a net zero emission society around the middle of the 21st century. This target is possible to achieve if solar PV power generation becomes the source of 69% of electricity globally by 2050—a viable target according to the LUT University's energy system transition model, which was used to simulate a transition pathway towards renewable energy in the power sector.

There have been a number of technical innovations that have enabled cost reductions in the PV industry. The leading PV material is silicon (Si), which is both abundant and cheap. The existing industrial large-scale manufacture of Si-based integrated circuit devices enabled the PV industry to expand Si-based manufacturing on a gigawatt scale in a matter of a few years. The key technical innovations that have enabled the $/W cost reductions involve various aspects of Si solar cell device design.

Black silicon. The use of vacuum-free low-cost wet chemistry-based metal assisted chemical etching (MACE) process that results in a highly absorbing (~99%) Si surface is known as "black Si." The MACE process results in increased solar cell efficiency with minimal increase in manufacturing costs, which is why it is increasingly adopted by Si solar cell manufacturers. According to the 2019 ITRPV report, MACE for mc-Si solar cell texturing will continue to be adopted by Si solar cell manufacturers with an increase in its share from around 15% in 2019 to 60% in 2029.

Bifacial photovoltaics. The passivated rear contact cell designs can be modified so that light hitting from both sides of the solar cell contributes to the electrical current produced by the cell. When placed into modules designed with transparent backsheets or glass-glass construction, bifacial PV modules are formed. Commercial deployment of bifacial PV cell and module technology is growing fast. The 2019 ITRPV report suggests 13% market share for bifacial PV technology in 2019 which is expected to grow to 60% by 2029.

The drastic cost reductions in solar power generation has led to its use in low-resource applications such as electricity and water supply in rural areas. SPIE Journal of Photonics for Energy is publishing a special section on solar energy solutions for electricity and water supply in rural areas in 2019. One of the guest editors of the special section, Tina Jaskolski of The American University in Cairo, is actively developing solar-powered rural projects in Egypt. Her team's projects include solar-powered 7-10 hp water-pumping units for irrigation, small-scale solar-operated chicken incubators for 100-1000 eggs, and solar-powered drinking water stations that purify water using anodic oxidation and green sand filters operating at only 100 Watts. 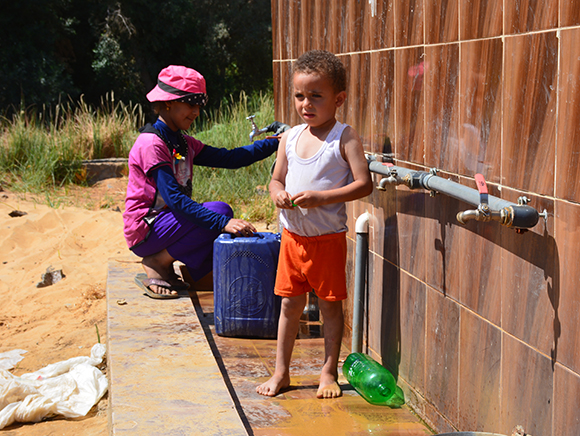 Jaskolski has some insight on why solar power generation is growing in Egypt. "As the Egyptian government is rolling back state subsidies on diesel, pumping water is becoming significantly more expensive and increasingly unaffordable for small farmers. In Egypt's Western Desert, a significant number of farmers have had to abandon their farms as they simply cannot afford the pumping costs for irrigation," she says. "Solar-powered pumping systems are an alternative solution that have become increasingly affordable as prices for solar panels, controllers, pump drives, and pumps are coming down."

To learn about her team's work and the work of other PV engineers and scientists across the globe who are developing solar power generation solutions for rural applications, read the papers in the special section.

-SPIE Member Fatima Toor is a professor of electrical and computer engineering at the University of Iowa, with expertise in semiconductor optoelectronics, electromagnetic design, solid-state physics, and quantum optics.