An experiential pavilion teaches the public about light.

Rome wasn't built in a day, but if Madison Rilling and Université Laval's SPIE Student Chapter had been in charge, it might have come close.

In December 2017, this group had an ambitious idea to showcase optical phenomena in Québec City, Canada. They applied for a $3000 SPIE International Day of Light (IDL) Micro Grant, to be used toward community events and activities that highlight the importance of light and light-related technologies in daily life.

Between being awarded the grant on 16 January and the International Day of Light on 16 May, the team of physics students applied for and secured additional grant funding, designed the optical displays, identified collaborators from the university's graphic design and architecture design student body, designed the platform, obtained necessary permits from the city to build the platform in front of the Parliament of Québec, bought materials, learned how to wire lighting and electricity, prepared publicity materials, coordinated a public opening ceremony, and finally built the platform. The construction itself was an intensive three-day project with a firm deadline for completion of 5 p.m. on 16 May when the opening ceremony would begin.

"At 4:30 p.m. we were still working on the platform, so most of us had wood dust in our hair for the ceremony!" said Rilling.

There are three separate cubic structures that act as three interactive stations that people can walk through to experience different light phenomena.

The perspective station is where the journey begins. It is a short black tunnel-like structure with a collection of white lines painted in a seemingly random fashion on both sides of a series of evenly-spaced wooden planks. Visitors have to move around to find the "sweet spot," that is, the exact spot of observation from which the different geometrical shapes perfectly align. This station shows you how perspective can significantly change the way you perceive your environment, and how important it can be to account for this effect when developing optical technology, such as self-driving cars.

The external walls of the perspective station are entirely covered with mirrors, which bent slightly when mounted. Inadvertently, this deformation gave the station a "house of mirrors" effect and emphasized the perspective phenomenon that the group wanted to illustrate.

"We realized that a lot of people were attracted by the platform just to take pictures in front of the mirrors, which then encouraged them to visit the whole platform," said Rilling.

From there, you walk across the platform and enter the second station, which is polarization. The walls are an artistic fresco depicting dawn in the North Pole with the sun's light reflecting over the water. The image is created using a strong LED spotlight reflecting on a transparent acrylic sheet. There is a window that you can look through to see what is hidden underneath the water. The window is a rotatable linear polarizing filter; when the viewer turns a wheel, the light reflections on the water can be selectively dimmed or cut. This station replicates the effect of polarized glasses.

Finally, the last station-spectroscopy-has a multicolored picture that is a superposition of three images-one red, one green, one blue-representing Québec City past, present, and future. On the outside of the station, the exact same picture is shown in large scale on each of the three walls. However, the viewer sees it through a red, green, or blue acrylic sheet, which acts as a filter, therefore revealing only one of the three superposed images.

After the platform was debuted in front of the Parliament of Québec, it was moved to the "SPOT"-an artistic ephemeral public space in the heart of Québec City built each summer at a different location by volunteer architecture students. La Terrasse Optique remained on display at the SPOT through the end of the summer.

The future of the platform is not yet set in stone. The students are hoping that it can be erected again next year for the International Day of Light or in collaboration with one of the city's major events in a key tourist area of the city. If they get an opportunity to put up the platform again next year, the group wants to improve the interactive stations to have a bigger "wow" factor.

Rilling says, "Since most of our time went into imagining and designing the platform, getting funding, and finally building the platform itself, we could not spend as much time as we would have hoped on improving our interactive stations, so that would be one of our priorities."

The group might get one more day to finish building Rome. 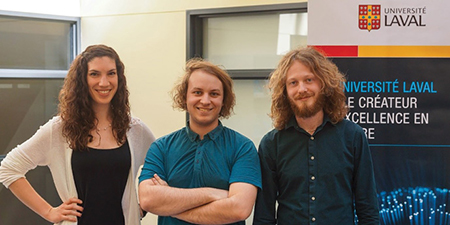 HiCIBaS - Up, up, and away
A balloon-borne mission demonstrates the functionality of high-contrast imaging equipment in the stratosphere.