A balloon-borne mission demonstrates the functionality of high-contrast imaging equipment in the stratosphere.

In late August, SPIE Fellow Simon Thibault of the Université Laval (Canada) and his team of graduate students will join with other collaborators at a specially converted airport in Timmins, Ontario to see their work of almost 2.5 years fly into the stratosphere. Their project, the High Contrast Imaging Balloon System (HiCIBaS), is a balloon-borne telescope designed to demonstrate the usability of high-contrast imaging equipment in space-like conditions.

While the use of space-based telescopes has transformed the field of astronomy, developing and launching these instruments on shuttles or spacecraft is often a long-term and expensive endeavor. Sending instruments aloft aboard suborbital balloons can provide comparable results at a much lower cost. Another advantage is that such instruments can be brought down to Earth from time to time for updates and refurbishments, thus increasing the possibilities for further research.

The HiCIBaS setup features a 14-inch Schmidt-Cassegrain telescope (Celestron C14 XLT) on a custom-built Alt-Az mount and an optical bench hosting two scientific subsystems. The payload is installed on CARMEN, a scientific gondola from Centre National d'études Spatiales (CNS), which will be launched with a 20-180m helium balloon. This flight will be the first time a telescope with adaptive optics is carried aboard a balloon. 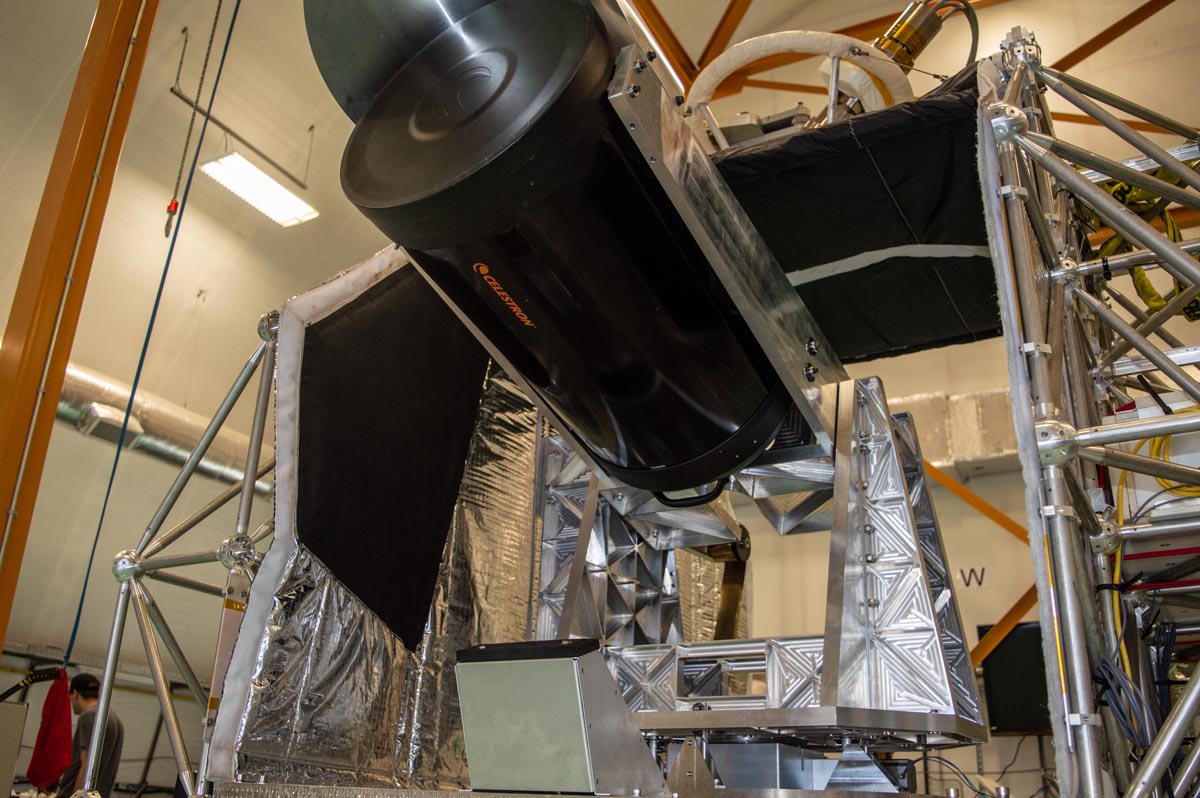 HiCIBaS' telescope installed in the CARMEN gondola. When integration is complete, the optical bench will be aligned behind the telescope. Credit: Cédric Vallée

Two of the student team members, Guillaume Allain and Olivier Côté, presented the project in June at SPIE Astronomical Telescopes + Instrumentation in Austin, Texas, where they explained the goals of the HiCIBaS mission:

The overarching goal of the mission is to test and evaluate the instruments, techniques, and concepts used so that they can be employed in future exoplanet-studying missions.

Once launched, HiCIBaS will be carried by a stratospheric balloon for eight hours at an altitude of 40km. To put this into perspective, graduate student Deven Patel, in charge of payload structure and integration of the EMCCD cameras, explains that commercial planes only fly at 10km. "At 40km, conditions are similar to space," says Patel, "but a stratospheric balloon mission is a lot less expensive than a space mission."

One of the challenges for HiCIBaS will be pointing to, and stabilizing the view of, the star in the telescope's field of view for long periods of time, despite the movements of the balloon. "In terms of distance, it's the equivalent to pointing at a hair, tens of kilometers away," says Patel. "This stability allows the light from the star to reach HiCIBaS's other instruments for imaging of exoplanets in orbit." 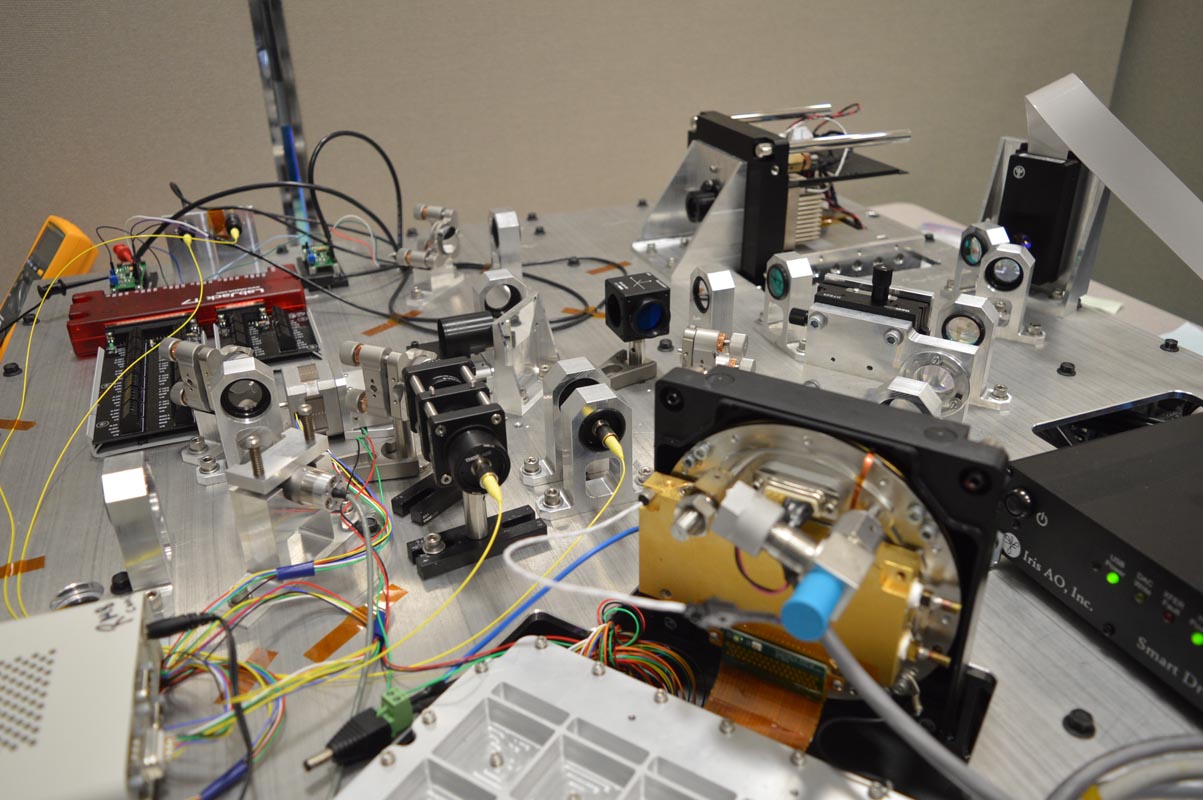 Close-up of the optical bench showing the coronagraphic, LOWFS, and calibration arms. The Nüvü cameras are at the bottom and top of the image respectively. The Iris-AO deformable mirror is located at the top-right. Light from the telescope enters at the bottom left of the bench. Credit: Cédric Vallée

Working as a team
Besides the leading-edge equipment, one of the unusual features of this first-generation project is that most of the work is being done by a team of five graduate students. Along with project manager Simon Thibault and research scientist Denis Brousseau, the students had to learn to work not only with each other, but also with collaborators in science and industry.

"I consider this a great opportunity for my professional training," says graduate student Cédric Vallée, who is in charge of computer software and hardware components of the mission, as well as data analysis after the flight. While working with this unique team, Vallée says he learned how to deal with "multiple mindsets in a stressful and time-restricted project." He also learned the need to reach out for proper help when dealing with problems he couldn't handle himself. "I would say that as a team, we overcame many obstacles to arrive at a great result," says Vallée. "I do not think that would have been possible otherwise." 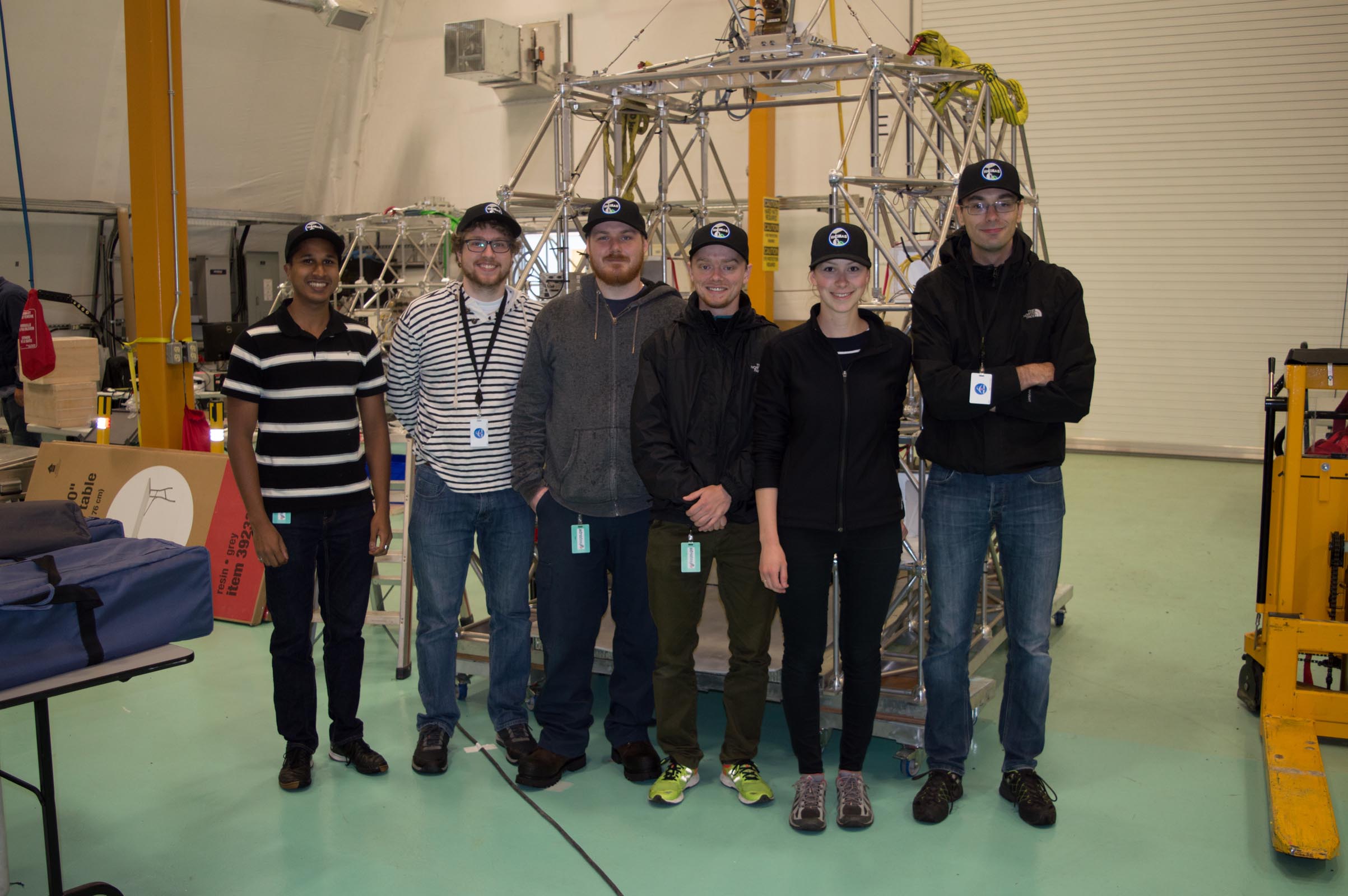 Simon Carrier is an undergraduate intern from Université de Sherbrooke (Canada) assisting Vallée with the computer software aboard HiCIBaS. He notes that HiCIBaS is a great example of the multidisciplinary nature of modern scientific projects.

"Projects like HiCIBaS teach me valuable real-life experience that I would otherwise never get in school," says Carrier. "You need experts from different areas to achieve the required performance. Mechanics, physicists, computer engineers: all are required on the project. But without proper teamwork, the cogs come to a halt and you end up with subpar results."

Carrier, who is studying computer engineering, works mainly with the computer side of the HiCIBaS project, but also has to consider factors from the electrical and mechanical aspects of the mission. "This interesting dynamic really pushes my mastery of computer science," says Carrier.

An international learning experience
When Thibault and his colleagues applied for the CSA-FAST grant in 2015, the project mainly involved Canadian affiliations including Université Laval, Université de Montréal, and University of Victoria; the National Research Council Canada (NRC); and technology companies such as ABB and Nüvü Cameras. After funding was granted, planet-imaging pioneer Christian Marois of the NRC contacted new collaborators to see if the mission could be enhanced by adding a new subsystem including a coronagraph and a deformable mirror. Iris AO, a California-based company, provided the deformable mirror for the mission and Frans Snik of Universiteit Leiden (The Netherlands) provided the coronagraph. Around the same time, Franck Marchis of the SETI Institute and Eduardo Bendek of NASA Ames Research Center joined the venture.

"The project was able to benefit from this network of collaborators," says SPIE Fellow Thibault, who is also on the editorial board of the SPIE journal Optical Engineering. "In a few months, the Canadian mission became an international mission."

Thibault notes that missions such as HiCIBaS are complex and require expertise from several venues. "The time and resource investments are very profitable in the end," he says. "I think this arrangement should be more or less the baseline for future projects."

Graduate student Mireille Ouellet works on the subsystem that includes the coronagraphic arm and deformable mirror, which will detect exoplanets by direct imaging. "This project is the perfect opportunity to test the readiness of various technologies in space-like conditions," says Ouellet. She adds that a multidisciplinary project such as HiCIBaS would not by possible without the collaboration of several experts from various universities and industries.

"Since the work is almost entirely done by graduate students, it is good practice to corroborate our work with experts who have experience with this kind of harsh environment. Like any engineering project, the success of the HiCIBaS project is based on a continuous collaboration and a good communication between all the involved parties."

For the coronagraphic arm, Ouellet worked with Iris-AO and international collaborators from academia. "This close and continuous relationship really helped me to deliver the subsystem," says Ouellet. "Who knows? Maybe some instruments designed and tested in Canada for HiCIBaS will make it to major space missions in the near future." 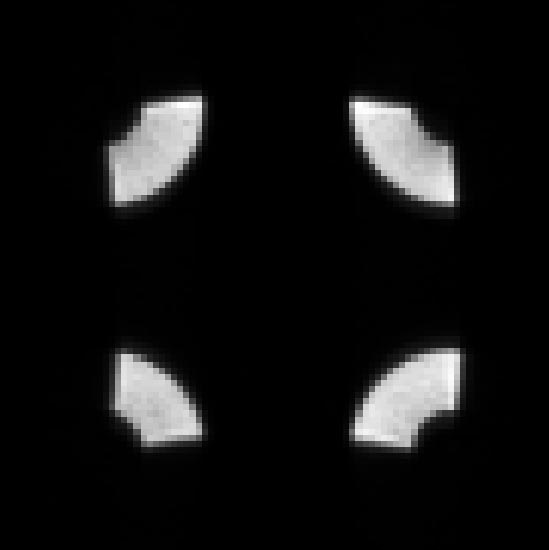 Image of the light of a star onto the LOWFS camera. The LOWFS splits the image from the telescope's primary mirror into its four corners. From these images, valuable information about the static aberrations from the optical system and from atmospheric turbulence can be extracted. Credit: Guillaume Allain

Editor's Note: on Saturday, 25 August at 11 pm, HiCIBaS launched successfully in Timmins, Ontario -- the last flight of the Strato-Science 2018 campaign. The OFAST-CARMEN scientific gondola hosted HiCIBaS' payload, along with other Canadian experiments and CSA systems including ALI V2, CATS, HABOO and PRISM. Post-flight analysis will be performed in the coming months, with updates from the SPIE Newsroom.

Training the future
Initial funding for HiCIBaS came from the Flight for the Advancement of Science and Technology (FAST) - a Canadian Space Agency (CSA) program. A collaboration between CSA and Centre National d'études Spatiales (CNES) lead to the creation of the stratospheric balloon program STRATOS in 2012. STRATOS provides Canadian academia and industry the opportunity to test new technologies and perform scientific experiments in a near-space environment, while training the next generation of scientists and engineers.

"In the last decade, the training of highly qualified personnel has become more and more important in university research projects around Canada," says Anne-Sophie Poulin-Girard, research scientist for the HiCIBaS project and chair of the SPIE Education Committee. "National programs, like STRATOS and FAST, have high standards regarding to the quality of the training. Both programs give the students the opportunity to become professionals while working on real life projects with deadlines, budget management, and engineering challenges."

First on-sky results, performance, and future of the HiCIBaS-LOWFS