There is much to learn about EUVL in the recently published SPIE Press Book, EUV Lithography

Extreme ultraviolet lithography, known in its short form as EUVL or EUV, is the next generation lithography technology that leading computer chipmakers will start using this year to print the most advanced computer circuits. This technology has an historic importance, as it is enabling the continued extension of Moore's Law.

In this article, I will tell you what EUVL is, why we need it, why its development has been so complex, and most importantly, how you can find out more about it.

It takes many complex steps to make the advanced computer chips that you find in your mobile phones and computers. The most challenging processing step is called lithography, which is really printing the circuit elements that one wishes to create on underlying silicon. Today, advanced lithography is done using excimer lasers, which have a wavelength of 193 nm. Today's lithographers use many tricks to print features much smaller than were allowed by the resolution criterion developed by Lord Rayleigh in the 19th century. These tricks include optical proximity correction, improved resolution by immersing wafers in water, and enhancing resolution with multipatterning. This type of lithography, called 193 nm immersionbased multipatterning (193i MP), is becoming more difficult due to the challenges of circuit design complexity, increased cycle time, cost, and edge placement errors (EPE).

This is where EUVL comes into the picture. With a wavelength of 13.5 nm, a reduction of almost 14 times that of 193i, we now have lot more flexibility, as the Rayleigh criterion allows us to print features 14 times smaller without a host of compensating steps and techniques. However, this change takes us to a different region of physics, as most materials readily absorb photons at this wavelength, which interferes with our ability to image circuits. Hence, we need to use mirrors instead of lenses, process in a vacuum, and use plasma sources to generate photons for printing. Due to these changes, there has been a long period of technology development and investment in EUVL, but this has led to new lithography tools, light sources, masks, and resists. The challenges caused by those changes have been effectively solved, with major leading chipmakers planning to start using EUVL this year to make their most advanced computer chips.

For now, plans are to start using EUVL at the 7 nm node as EUVL slowly replaces 193i MP. The immediate challenge for EUV is the tool uptime. In the near future, we will need to address stochastics (random unpredictable events) and the challenges of high numerical aperture (NA). These are significant challenges, but challenges are a part of any cutting edge technology such as EUVL. 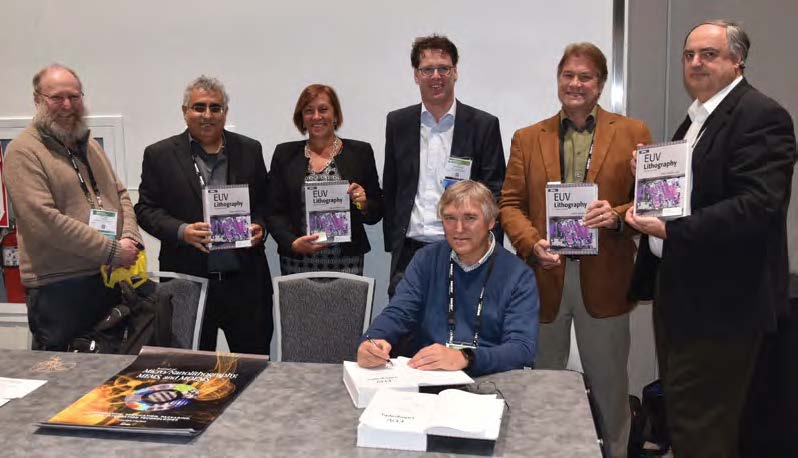 There is so much to learn about this new technology, and the best place to learn about EUVL is via the recently published, second-edition, EUV Lithography, that I have edited for SPIE Press. You may be curious, already working on a component of EUVL, or wondering how your technology can be part of EUVL. I trust that this book will be a valuable reference for you. This edition includes new and updated text from leading experts on each topic, with great new details conveniently available in one place for the first time. Topics include EUV sources for scanner and metrology, optics, contamination, mask, patterning, resist and more. This edition presents EUVL technology as it is implemented today, providing a great resource for students and professionals alike.

I find the book's most valuable portions include a chapter on optics by Carl Zeiss AG, maker of optics for the EUVL scanner; a chapter on EUVL scanner by ASML, sole maker of that tool; and chapters on EUV sources. These discussions will familiarize you with the fundamentals of EUVL and the latest version of the technology. There is a lot of new knowledge here on EUVL, which is leading the extension of Moore's Law.

SPIE Member Vivek Bakshi is the founder and president of EUV Litho, Inc., an organization he formed in 2007 to promote EUV lithography via consulting, workshops, and  education. He has published four books on EUVL with SPIE Press, including his latest EUV Lithography, 2nd Edition. Bakshi's other EUVL-related activities can be found at www.euvlitho.com.