The award recognizes Corkum's conceptual contributions and development of new laser methods that led to the creation of the field of attoscience.

I owe my career to a high-school teacher," says Paul B. Corkum, recipient of the 2018 SPIE Gold Medal. "When I was young I did not understand the wonderful life that science brings."

This changed when Corkum met his 10th-grade physics teacher, Anthony Kennett. "He tried to prove everything," says Corkum. "And that's what you want to do in physics - prove everything."

On his paper route, Corkum found himself thinking about the day's physics class and beginning to understand the concepts as he pitched newspapers onto porches.

Corkum's subsequent career in physics includes introducing many of the concepts explaining how intense light pulses interact with atoms, molecules, and solids, and confirming those concepts experimentally.

A professor with the Joint Laboratory for Attosecond Science at the University of Ottawa (Canada) and National Research Council (NRC) of Canada, Corkum is receiving SPIE's top award for his conceptual contributions and the development of new laser methods that led to the creation of the field of attoscience.

"Corkum's work introduced a new area of science that brings together chemistry and physics in the form of high-intensity molecular science, proving that highly nonlinear, non-perturbative phenomena can occur at the molecular level in very intense laser fields," says Sir Peter Knight of Imperial College London (UK). "Together with Ferenc Krausz, Corkum is the founder of attosecond science and they have been recognized throughout the world for this achievement."

Knight explains that when intense ultra-short laser pulses are focused into a gas, a laser-like beam of attosecond pulses of ultraviolet light is produced. An attosecond is 1×10-18, or one quintillionth of a second.

Corkum was the first to explain this phenomenon with a conceptually simple model. This led to pioneering studies in collision physics, plasma physics, and molecular science. Corkum has even been able to produce tomographic images of the movement of electrons in molecules. 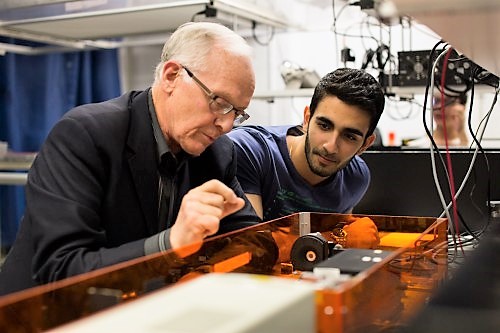 Putting things together
Corkum grew up in Saint John, New Brunswick, a small port city on Canada's East Coast. The son of a tugboat captain, he grew up around boats, sailing with his father, and learning to work on boat and automobile engines. This experience came in handy in 1973, when Corkum interviewed for a job with the NRC.

He was trained as a theoretical physicist, so was asked, "What makes you think you can become an experimentalist?" He told the story of how when he was a graduate student, he and his wife drove an older-model car that spewed black smoke. They couldn't afford a new car so, Corkum bought a book on car repair and "did what it said." The rebuilt engine ran perfectly.

"My wife was so impressed," Corkum told the interview panel, "that I could do no wrong - at least not mechanically." The NRC was also impressed and took a chance on hiring a theorist.

"I had completed my PhD research on the connection between correlation functions and transport in magnetized plasmas," says Corkum of his move to experimental work. "That research required theoretical skills. However, it turned out that I am a better experimentalist than I ever was as a theorist."

Corkum explains that experimentalists are expected to understand and pursue simple theories, but also to solve technical problems in the lab and to work in a group atmosphere. "I liked this combination, but having a background in theoretical science still benefits my approach to scientific challenges," he says. "I still keep a theorist's eye on all of my experiments and I make sure that each experiment helps to answer a broad scientific question."

Corkum still likes to fix things, but notes that cars are more reliable today, so there is less need for repair. "But," he add, "I recently disassembled our washing machine and replaced the shock absorbers."

The ‘ah ha' moment
When Corkum began at the NRC, physicists were using large, powerful lasers to send very short pulses of laser light into very small targets. The concentration of energy on a tiny target creates plasma for an instant. This plasma would reach extremely high temperatures that let scientists study conditions nonexistent on Earth.

Wanting to improve this system, Corkum began working on designing and building lasers that used even shorter laser bursts with even higher energy. With this work, a puzzle soon emerged. In theory, an atom absorbs some energy from the laser, loses an electron in this process, then stops absorbing energy. But researchers observed that atoms were actually absorbing more and more energy and giving off unusual harmonics of light - up to 100 colors.

In 1992, Corkum pondered this puzzle with colleagues Albert Stolow and Misha Ivanov while driving home to Ottawa. Corkum theorized that what might be happening is that an atom has its electron stripped away by the laser pulse, gets it back, loses it again, gets it back, and so on. Light in a laser is a wave that oscillates, so this made sense. Each time the electron "re-collided" with its atom, thought Corkum, it gives off all colors of light. This ‘ah-ha' idea opened up a brand new field of physics.

At the time, Corkum's colleagues were more nervous than excited as he kept taking his hands of the steering wheel to gesture with both hands as he explained this new idea. They made it home safely and Corkum turned his idea into one of the most-cited physics papers of 1993. His idea allowed researchers to study matter and energy in attoseconds, an instant short enough to observe chemical reactions as they happen.

A Nobel contender
Paul Corkum is a Fellow of the Royal Societies of Canada and London and a foreign member of the US, Austrian, and Russian Academies of Science. Among his many awards, are the Canadian Association of Physicists' Gold Medal for Lifetime Achievement in Physics (1996), the Royal Society of Canada's Tory Award (2003), Saudi Arabia's King Faisal Prize for Science (2013), and Israel's Harvey Prize (2013). In 2014, he was named a Thomson Reuters Citation Laureate for achievements considered likely to win a Nobel Prize. 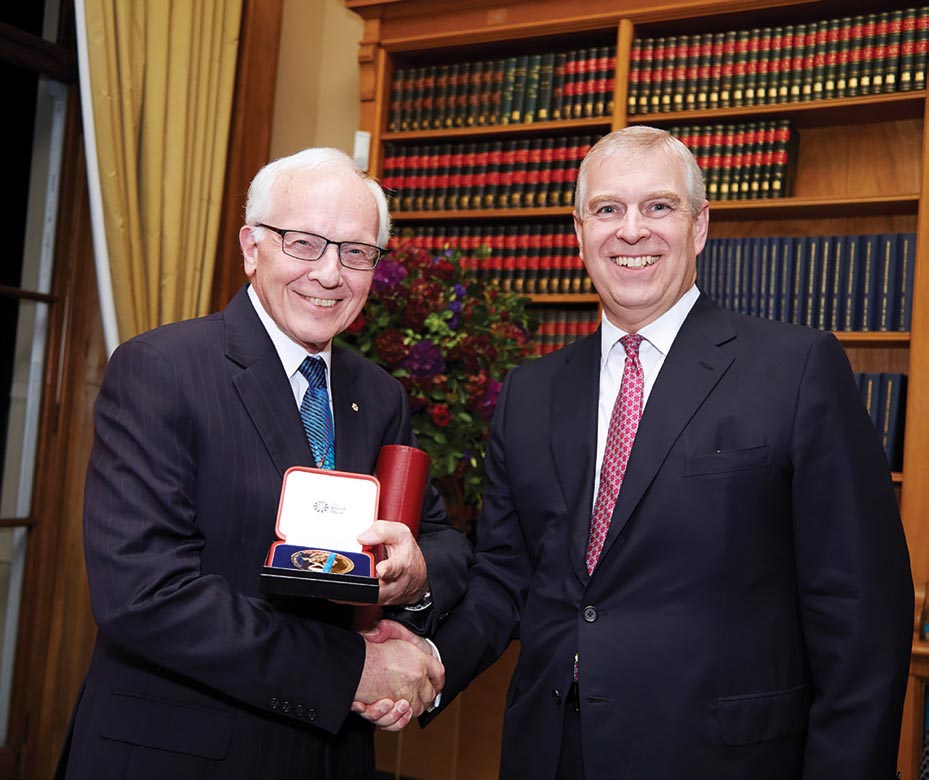 In 2017, Corkum received the Royal Medal for his major contributions to laser physics and development of the field of attosecond science. He was given the award by HRH Prince Andrew (pictured). Credit: The Royal Society

"Paul Corkum's work and vision for attosecond science will potentially be a contender for a Nobel Prize in physics or chemistry," says Stephen R. Leone of the University of California, Berkeley (USA). "It represents a breathtaking advance that permits measurements of electron dynamical timescales."

Leone adds that in addition to producing award-winning research of his own, Corkum's insight into a broad array of important problems has set the tone for others around him. "His ability to select talented individuals and bring out the best in their creative energies is truly remarkable," says Leone. "The scientific fields and integration of topics embraced under his leadership produced a crown jewel of the research system, including nanoscale design and dynamics, ultrafast processes, high field physics, x-ray lasers, and theory."

Corkum will formally accept the SPIE Gold Medal 22 August at SPIE Optics + Photonics where, on Sunday 19 August, he will give a plenary talk on photon management through in situ photon conversion with optical nanotransformers.

Karen Thomas is a senior editor at SPIE. This article originally appeared in the July issue of SPIE Professional magazine.