European industry is an active participant in the quantum technology race.

Global efforts to translate quantum research into real-world applications have gained significant momentum over the past few years as both government and industry recognize the potentially huge economic impact of quantum technology. With implications that range from the security and defense arena to the financial trading floor, the "second quantum revolution" is driving a worldwide technology leadership race aimed at quantum-enabled product innovation across practically all industrial sectors.

Fundamental quantum research has been ongoing for some time. The European Union (EU), for instance, says it has invested about $660 million over the past 20 years in quantum technologies. Consulting firm McKinsey estimated that in 2015, 7,000 people worldwide, with a combined budget of about $1.5 billion, were working on quantum-technology research. The top three players at the time (in terms of investment) were the EU, the US, and China.

The relatively recent realization that the research now has real practical implications with economic consequence is pushing quantum technologies to the forefront and significantly boosting investment and engineering activity from national governments and industry. Initiatives in Europe include national efforts in the UK (QT Hubs), Germany (QUETGA), the Netherlands (QuTech), and Denmark (QuBiz), as well as the European quantum technologies flagship program (QT Flagship).

One of the earliest national initiatives started in late 2013 when the UK announced a £270 million investment over five years to fund a new network of quantum technology centers and translation of the UK's quantum research activities into application and new industries. The goal was to "make the UK a go-to place for development and commercialization of quantum technologies ... " Subsequent UK investment includes £20 million to support development of new prototype devices based on quantum effects.

Quantum-enabled devices and the route to large-scale commercialization of quantum technology were also the subject of a panel discussion at SPIE Photonics West earlier this year. With a nod to the considerable implications for photonics technologies - which feature heavily in the quantum world - panelist Andrew Robertson of Gooch and Housego (UK) said, "Quantum, with its photonics-rich environment, is a great investment and opportunity for us," he said. 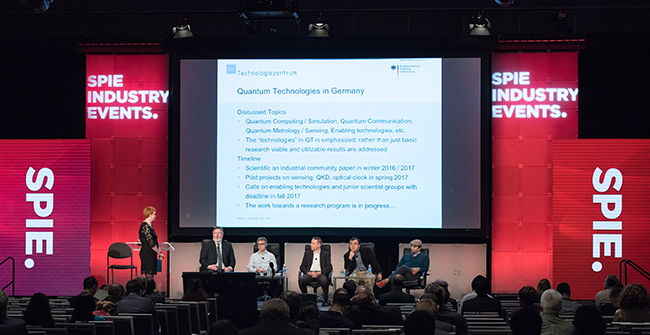 The panel discussion, "How Global Investment is Bringing Quantum Technologies to the Marketplace," at SPIE Photonics West 2018.

The potential applications of quantum technology are almost infinite according to Rishiraj Pravahan of AT&T (USA) who was on the same panel. He commented that short-term possibilities include communications, navigation and timing for the military, and financial institutions that want to stamp  transactions. "The immediate impact," said Pravahan, "is what we can see; true impact is what we cannot imagine yet. The 100-year future is going to be amazing."

With the "amazing future" in mind, the EU launched the QT Flagship, billed as "one of the most ambitious long-term research and innovation initiatives of the European commission." The goal of the QT Flagship is to kick-start a competitive European industry in quantum technologies with a €10 billion investment over a ten-year timeframe.

At SPIE Photonics Europe in April, Tommaso Calarco, director of the Institute for Complex Quantum Systems at the University of Ulm (Germany), detailed the initiative during his keynote presentation "Launching the quantum flagship." He also stressed that despite strong global competition, the European continent had not "missed the train." He opined that Europe's scientific and industrial expertise, coupled with the likelihood of further heavy backing from the European Commission (EC), would ensure it kept pace with quantum-related developments at giant US technology corporations and the Chinese state (see optics.org/news/9/4/35). 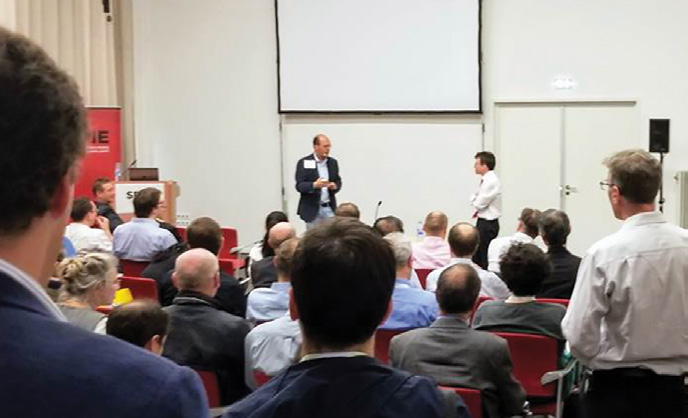 Industry Engaged
European industry is also an active participant in the quantum technology race. Players include startup companies such as KETS Quantum Security (UK), NQCG (Norway), and InfiniQuant (Germany) as well as much larger and more-established entities like Bosch, Ericsson, STMicroelectronics, and Thales - all of which are members of the QT Flagship high-level steering committee. Other companies entering the field are well known to the photonics community such as Toptica Photonics (Germany) and M Squared Lasers (UK). Their shared goal is early participation in the bounty of a quantum-enabled industrial marketplace - and not only in Europe. The question, of course, is how best to achieve this goal?

Perhaps to address this question, optics manufacturer Zeiss recently invited about 300 international experts from research and industry to its Oberkochen facilities to discuss the future of quantum technologies. Entitled "Optics in the Quantum World" the symposium reached three conclusions: 1) While quantum technology is an opportunity for academia, industry, and society, it is currently entering the "trough of disillusionment" in the hype cycle. 2) An ecosystem consisting of application, engineering, and science is key for the success of quantum technology. 3) Active management of expectations is needed - long-term goals and short-term applications should be separated, and the latter harnessed as soon as possible.

Meanwhile the first round of proposals for the QT Flagship are currently under review, so the flagship effort will begin in earnest when the winning proposals get underway in January. Such proposals might include building the first quantum computer in Europe, using quantum techniques for much-improved cybersecurity and data protection, delivering a pan-European quantum-encrypted network, or developing key technologies related to autonomous driving or healthcare. All of these examples would have a global impact as quantum-enabled commercial activities grow into the next decade and beyond.

Stephen G. Anderson is director of industry development for SPIE.