The 2018 SPIE Women in Optics planner

As a teenager, Tatiana Novikova, a research scientist at Ecole Polytechnique, CNRS (France), says she was drawn to natural sciences because "they explain the world around us using well-defined sets of rules and instruments. Creating order from apparent disorder attracted me the most."

One thing Novikova has learned from her career in science is that "the most interesting results and greatest satisfaction are obtained by pushing your limits and proving to yourself that you can do it."

The SPIE Women in Optics program encourages young women to choose optics and photonics as a career by promoting personal and professional growth for women through community-building networking opportunities. The group offers the SPIE Women in Optics monthly planner to showcase the work of women such as Novikova. [Request a copy]

The optics and photonics professionals featured in this year's calendar talk about their job responsibilities, early inspirations, obstacles they've faced, advice they wish they'd received in their early years, and what advice they have for women considering a career in science, technology, engineering, and mathematics (STEM). 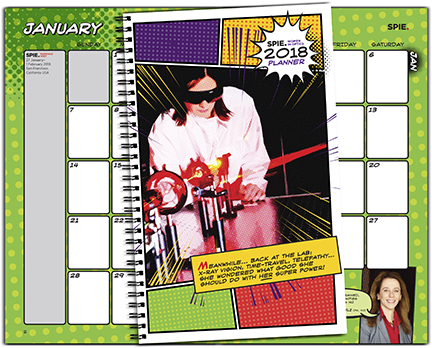 SPIE member Angela Dudley on the cover of the 2018 Women in Optics planner.

Work-life balance
While the women's early inspirations range from their elementary school teachers to watching Star Trek or Sesame Street, two common themes that emerge among those interviewed in the Women in Optics planner are balancing family with career responsibilities and gender bias.

SPIE member Candace Lynch, a senior crystal growth scientist at Inrad Optics (USA) and mother of three, says that balancing family and work is her biggest challenge. She adds, however, that "motherhood has made me even more organized and productive, since I know that I need to make every minute at work count."

Early in her career, SPIE member Anjul Loiacono, a manager at Thorlabs (USA), was told there are five aspects of life that one should balance: career, family, health, friends, and sleep. "I try to manage balance by accepting that there will be times when wide swings happen in life and I try to counter-balance these swings," Loiacono says. "Identify what is important to you and make sure you dedicate time to keep it in balance."

For Celeste Ford, CEO and founder of Stellar Solutions (USA), engineering is a results-oriented, family-friendly field. "You're judged by getting a project done well, not by how many hours you log in," Ford says. "I have three grown children and that kind of support and environment at work made it possible to focus on the family as well."

"Life is based on series of challenges," says SPIE member Rim Cherif, an associate professor at University of Carthage (Turkey). "My first challenge was choosing telecommunication engineering, which was a new and man-dominated field. There were only 15 female students and over 80 male students in the program," Cherif says. "Now, the biggest challenge I face is the balance between family life and work. As a perfectionist, I work hard and do my best to achieve my professional goals."

Challenging sexism
When Andrea Belz, a vice dean at the University of Southern California (USA), began graduate school, several classmates assumed she was admitted because of her gender and not her skills. When she began working in the angel investor community, she received business plans describing baby clothes instead of lasers. After joining a corporate board, a colleague told her, "They don't let kids or girls play." With every step forward, Belz says, "I've been forced to have difficult conversations" to challenge those kinds of statements and attitudes.

Pinghui Sophia Yeh, an associate professor at National Taiwan University of Science and Technology, grew up in what she describes as a "patriarchal family" and says that most families in Taiwan preferred to have boys. "In the male-dominated world of [STEM], women are the minority politically," Yeh says. "However, more women are being recognized for their contributions, and through persistent efforts, we are reshaping the images of women."

When Meg Urry, professor of physics and astrophysicist at Yale University (USA), was a student, she was grateful just to hear the name of a woman scientist, much less meet one. "Now we have SPIE calendars full of interesting women!" Urry says.

Urry notes that sexism was her biggest obstacle in that she saw women were often underestimated and overlooked. On average, she saw men being given more opportunities, more credit, and more rewards. "This situation is changing," Urry says, "but still too slowly."

I wish someone told me
Many of the women interviewed in the Women in Optics calendar wish they had been given certain advice as they were starting out. But for Yasaman Soudagar, founder and CEO of Neurescence (Canada), sometimes the advice given was more of a problem than the advice she didn't get. "I was told mostly how to be a ‘good' woman," Soudagar says. "Social cues and pressures dictate that regardless of her expertise, a ‘good' woman gets married by a certain age and dutifully raises healthy children. If she happens to have a profession as well, then good for her."

As if to answer that problem, Silvia Carrasco, a director at ICFO (Spain), notes that, "It is wise to listen to what colleagues say, but at the end of the day, you have to follow your own gut."

Many also wish they had gotten the simple message that it's not only possible, but also OK, for women to pursue a career in science.

"I wish someone had told me that we are stronger than we think, even us female professors!" says SPIE member Yi-Hsin Lin, a professor at National Chiao Tung University (Taiwan). She adds that girls shouldn't limit their dreams if anyone says women can't compete with men in STEM careers.

SPIE member Claudia Valdés, an advanced imaging specialist at ZIVOT (Columbia), voices a similar opinion: "I wish someone had told me to be more self-confident and trust in my own work," Valdés says.

Jess Wade, a post-doctoral researcher at Imperial College London (UK), would like to have been told many things, such as no one is an expert in everything, there needs to be a work/life balance, and it's OK to fail. "In life and with experiments, things can go wrong," Wade says. "But as long as you're happy and healthy, you will develop as a person." She also wishes someone had told her that doing a PhD is "one of the biggest privileges in the world."

Opening doors to your passion
"If you are interested in science, and new challenges are your passion, go for it!" says Katarzyna Matczyszyn, an assistant professor at Wroclaw University of Science and Technology (Poland). "From my teaching experience," she adds, "I know that girls work just as hard as boys - or sometimes even harder - so they should not worry regarding a career in STEM."

This idea of pushing ahead, no matter the obstacles, is another common theme among the women in their advice to girls.

SPIE member Muyinatu Bell, an assistant professor and lab director at Johns Hopkins University (USA) advises girls interested in studying science not to be afraid of being themselves, even if it seems to be an unpopular choice at the time. "One day, you will have the opportunity to meet others like you who share similar interests and can relate to your unique story," Bell says.

"The door is open and the world is encouraging you to come through - but you still must walk through that door and work hard on the other side," says M. Cather Simpson, a professor at University of Auckland (New Zealand). "With STEM, you can have a fascinating, joyful career; you can have a family; and you can make a difference."

The 2018 SPIE Women in Optics planner is distributed free to SPIE members, career counselors, science teachers, and community clubs. To receive a copy, email help@spie.org or fill out this form.

-Karen Thomas is a senior editor at SPIE.

Glass ceiling, sticky floor: countering unconscious bias in photonics
Struggles for opportunity and inclusion are familiar to many women and minorities working to make a career in a STEM. 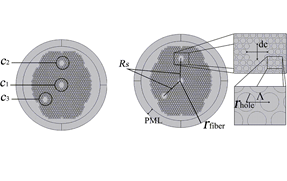