The deployment of DFOS is still in its infancy, but as more people become aware of the technology, it will gain wider use.

Fiber optics infrastructure monitoring has traditionally been the domain of pipelines and power transmission lines, but that is changing with the evolution of distributed fiber optic sensors (DFOS).

Strain gauges and extensometers have been used for many years to monitor concrete structures. However, the information that they can provide is limited as they only return measurements at discrete points rather than along the entire length of the structure.

With fiber optic sensing, the entire length of an optical fiber can be used as a distributed sensor.

A long structure, such as a pipeline, can have a fiber bonded to its surface. Any changes to the strain on the fiber can be readily detected and measured by an interrogator unit at one end of the fiber.

"Not only can the change be measured, but the position of that change can also be pinpointed," explains Gordon Youle, vice president, test equipment, at SPIE corporate member OZ Optics (Canada). "In the case of a pipeline, the detected change in the strain could be caused by ground movement, corrosion or thinning of the pipeline wall, or malicious attempts to damage the pipeline.

"Regardless of the cause, the pipeline operator is made aware that an event has occurred that may require further investigation. An early response to an unusual or unexpected strain could prevent a potentially catastrophic failure that would otherwise cost huge sums of money, create an ecological disaster, and in the worst-case, result in injuries or deaths."

Distributed sensors can also monitor other large structures such as levees or dams. In the case of a levee, a fiber-optic cable could be installed within the levee. Any movement of the soil, which could be indicative of an impending failure, would result in a change in the strain sensed by the fiber. This could allow for the evacuation of an endangered area before a complete failure occurs, or preventative action to avoid the failure altogether.

Optical technology options
Several different technologies can be used with DFOS. In each case, there is an interaction between light and the molecules in the fiber. Since the glass in the core of an optical fiber is clear, most of the photons can travel long distances without losing any energy. A small percentage of the photons, however, will interact with the molecules in the glass, resulting in a scattering (Raman, Brillouin, and Rayleigh) of a small amount of light within a fiber.

The characteristics of the light that is scattered is dependent on the properties of the fiber, which may be a function of strain or temperature. 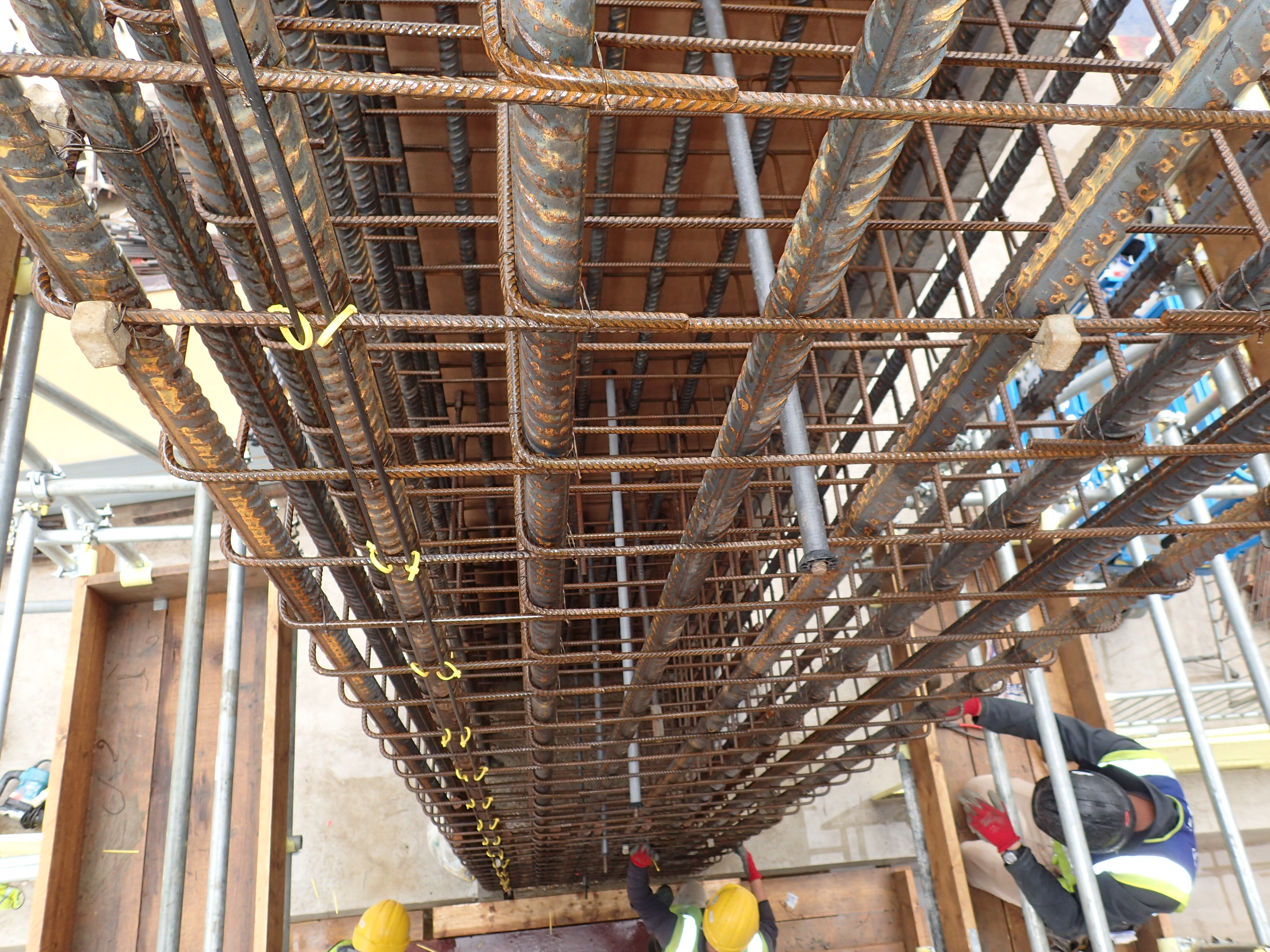 DFOS strain-sensing and temperature-sensing cables are attached to a column reinforcement during construction, prior to concreting.

In the case of Brillouin scattering, the wavelength of the scattered light is very slightly different from the wavelength of the light that was originally injected into the fiber. The corresponding frequency shift resulting from the change in wavelength is only about 10GHz, compared to the frequency of light, around 193THz. These scattered photons will travel back along the fiber to a detector, where the signal can then be processed. By accurately measuring this change in frequency relative to a baseline frequency, it is possible to calculate the change in strain or temperature that was applied to the fiber.

Civil infrastructure monitoring
For several years, the Cambridge Centre for Smart Infrastructure and Construction (CSIC) at the University of Cambridge (UK) has been developing DFOS for a range of civil infrastructure monitoring applications. The use of a single optical fiber with a length of up to tens of kilometers of continuous sensing elements makes it possible to obtain a body of invaluable information on the strain and temperature distribution in civil infrastructure assets. CSIC has developed data-interpretation methods that utilize new continuous data for engineering assessment of piles, tunnels, retaining walls, pipelines, slopes, and bridges. 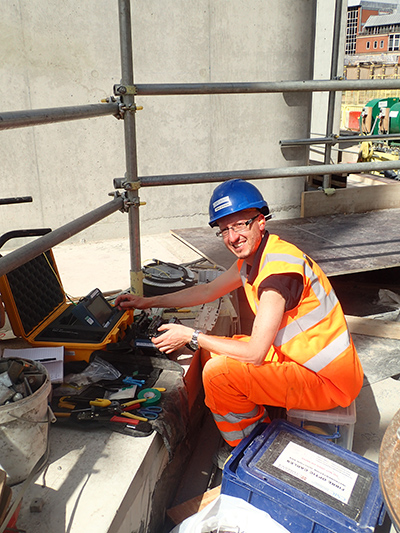 Nicky de Battista of University of of Cambridge testing the fiber-optic cable connections at the Principal Tower construction site.

"After many field trials and incremental improvements, DFOS is now at a high technology-readiness level and, in fact, has been adopted by several industry sectors as a standard monitoring tool," says Nicky de Battista, who has been researching innovative uses of DFOS. "The cost of a fiber-optic sensing cable is potentially very low compared with point measurement sensors, when considering one can obtain many measurement points per meter of cable.

"The optical fiber material itself is relatively inert and can be ideal for long-term monitoring when the fiber is embedded in structures. The current performance of optical fibers embedded in infrastructure is more than sufficient for most civil monitoring applications and this is expected to improve even more as capability of analyzers improves.

"DFOS is ideal if you want to monitor strain or temperature over a long distance or a large area, and particularly if you want to detect the presence of an event such as cracks, material anomalies or water infiltration, but you cannot predict where these will occur."

Most of the capital investment relates to the optical analyzer, which can be connected to several fiber-optic cables or be shared at different sites. It is expected soon that an increased choice of analyzers from more manufacturers will bring a reduction in price. However, in most projects, it is the monitoring service provider, such as CSIC spinout company Epsimon, that owns the analyzer and provides it as part of the service.

One recent deployment for DFOS was to measure axial shortening of reinforced concrete columns and walls at Principal Tower, a residential building currently under construction in central London that will rise 163 meters above ground. The contractor and designer are keen to verify the predicted axial shortening values and adjust the column height presets in the reinforced concrete structure if necessary. Fiber-optic sensors were embedded in two columns and two walls to measure the axial deformation of these elements. Principal Tower during construction in 2016. The building is expected to be completed in 2019.

The tower is being constructed using an automated "jump form" system that incorporates the whole building footprint, including the columns. The fiber-optic cables are housed in reels within the jump-form rig and are unwound and embedded with the concrete as the construction progresses upwards.

De Battista and two colleagues from University of Cambridge reported on the use of distributed fiber optic sensors at the Principal Tower and two other construction sites in London at the 2016 European Workshop on Optical Fibre Sensors. (The proceedings paper, "Distributed fiber optic sensors for monitoring reinforced concrete piles using Brillouin scattering," is available in the SPIE Digital Library.)

Since the DFOS system is also measuring the temperature of the concrete, it is possible to isolate the effect of thermal movement to reveal the shortening due to load and concrete shrinkage and creep. From this approach, it becomes clear that thermal effects can be significant, and at times, they can account for up to half of the total axial displacement of the columns.

Future developments
The deployment of DFOS is still in its infancy. "Most people are still unaware of the capabilities of distributed optical sensing," Youle concludes. "The education of the public, industry, and policy makers is a daunting task, but as more people become aware of the technology, it will gain wider use."
We are only now starting to see some of the research being spun off into commercial products. Youle predicts that greater volumes will lead to lower cost of implementation. "At the same time, we will see improvements to the electronics and processing software, making the technology more sensitive and versatile," he says.

In addition to technological improvements, "we will also see the development of standards and best practices," he says. "This, in part, is being driven by the newly formed Fiber Optic Sensing Association (FOSA), which was created to educate and promote the use of the technology to interested parties. Standardization will certainly make it much easier to deploy the technology."

-Mark Venables is a freelance technical editor and writer.

Pushing the limit on the distributed Brillouin sensors
A technique that exploits different pulse widths delivers the best spatial resolution and sensing length to date for distributed sensors based on scattering of light by sound waves.

Photonic sensor opportunities for distributed and wireless systems in security applications
In the near future, photonic sensor technology is expected to evolve to multifunctional capabilities that include biochemical detection by exploiting wireless and distributed fiber solutions.