Two EU rules — RoHS, the directive on certain hazardous substances used in electrical and electronic equipment, and REACH, the regulation on registration, evaluation, authorization, and restriction of chemicals — have jeopardized optical glass manufacturing in the EU since 2003.

REACH addresses the production and use of chemical substances and their potential impacts on both human health and the environment. Glass is considered a substance of unknown or variable composition (UVCB).
RoHS II or RoHS-recast restricts (with exceptions) the use of four elements: mercury, lead, cadmium, and chromium VI, in the production of electronic and electrical equipment.

The goals of the regulations — to manage the release of hazardous chemicals (REACH) and to improve recycling of electronic waste (RoHS) — are admirable. That glass was affected was an unintended side effect.

In 2014, after industry lobbying efforts, the Federal Institute for Occupational Safety and Health (BAuA), the agency responsible for the enforcement of REACH in Germany, issued an official statement characterizing raw materials used in glass manufacture as intermediate substances, meaning manufactured for or used for chemical processing. Under this statement, all raw materials for the production of optical and filter glasses are allowed by REACH indefinitely. 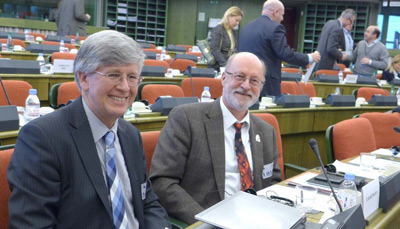 Peter Hartmann (at right) and Michael Wale of Oclaro UK were among photonics leaders who testified on RoHs and Reach to the Science and Technology Options Assessment committee at the European Parliament in February 2014.

One of the main targets of RoHS, lead-containing solder, was classified as lead. This affected all applications of all lead compounds, whether they were harmful or not. The consequences of this classification was detrimental for optical glass manufacturers and others in the optics community.

The exemption relating to filter glass in the earlier version read, "cadmium and lead in filter glasses and glasses used for reflectance standards" (the second part does not relate to filter glass). This was converted into four subparagraphs making it quite complicated at first glance. 13(b) maintains the original wording for granting longer expiry periods for two minor subcategories of electric and electronic equipment (EEE) (in vitro diagnostic medical devices and industrial monitoring and control instruments). For all other EEE categories, the original wording is split into three phrases:

Point 1 refers to green ion colored filter glass. In the Schott filter glass catalog, only the type VG9 is left over due to very little usage of these filter glass types.

Point 2 covers the steep slope cadmium filter glasses. The reference to point 39 relates to cadmium in color-converting II-VI LEDs, which has nothing to do with glass filters.

Point 3 separates a different application of lead and cadmium, which had been added by the EU to the glass filters in the 2011 exemption.

The expiry date for all three exemptions is 21 July 2021. The subcategorization for granting expiry dates two or three years out given in 13(b) does not really help. If the prohibition went into effect after July 2021, the production and sale of these glass types would eventually stop, because continuing the supply for just a few allowed applications would no longer be economical.

Outlook for EU-REACH and EU-RoHS
With the exemptions to the chemicals law EU-REACH, all threats to optical and filter glass have been removed. What remains to be done is to assure there are no intentions to change the present state of EU-REACH. The European Special Glass Association (ESGA) does this job and will take necessary steps, if needed.

The main question with EU-RoHS is what will happen after July 2021? The 2017 exemptions are the third set since 2006. The optics industry cannot live with the risk that every five years, essential materials will be prohibited. For the EU, exemptions are a means to manage intermediate periods for phasing out materials finally. This tendency can be ascertained by the changes in the exemptions' wordings:

These complications demonstrate how some of materials can be phased out by making formulations increasingly specific.

A better way would be to insert two words - "optical materials" - within the RoHS directive itself, under the general heading of article 2, "Scope," paragraph 4, which begins with the words, "This directive does not apply to ...".

Unfortunately, we cannot just go to Brussels and tell somebody to add these two words into EU-RoHS. This directive can only be changed following the legislation procedure of the EU. This requires an agreement of the three legislative bodies of the EU -- the Commission, the Parliament, and the Council. Fortunately, an opportunity to do so is approaching.

EU-RoHS task force
Revision of EU-RoHS is planned for 2021, as it is written in article 24.2 of EU-RoHS. Now is a propitious time to exclude optical materials from the scope of EU-RoHS. This will require considerable lobbying effort, which means finding the right people in the EU who can understand and accept this goal, and support it.

The task of the optics and photonics community is to demonstrate the importance of the materials.

The EU-RoHS task force consists of one representative each from the German industrial federation SPECTARIS, Carl Zeiss, and Schott. These representatives plan to start lobbying as soon as the EU announces the beginning of EU-RoHS revision activities. The task force asks members of the optics and photonics community who need these endangered materials to provide their names as supporting companies and institutions and offer application examples. Include products that would not be available anymore or available with reduced functions and quality, and the consequences of their unavailability for future use. For example, what would it mean if the blue violet spectral range were no longer observable in fluorescence microscopy or in endoscopy?

After the EU-RoHS revision period in 2021, the next revision period will probably not occur until 2031. Exemptions might not bridge this time span. Pressure will culminate in 2021 for everyone to decide either to continue with lead flint optical glasses and the steep slope cadmium filter glasses or to abandon them.

The EU-RoHS task force believes that the removal of optical materials from EU-RoHS would be of great help to the optics and photonics community as well as to the many companies that need high-tech systems requiring the availability of all optical materials. This is a necessary precondition to advancing the EU's commitment to satisfy the EU sustainable development goals (SDG) by 2030.

SPIE Fellow Peter Hartmann is SCHOTT principal scientist for optical glass and Zerodur. He last wrote about the EU's REACH and RoHS regulations in the April 2014 issue of SPIE Professional.
Hartmann has a PhD in physics, centered on the development of scintillation glasses, from University of Mainz (Germany).