A brief history of the SPIE award for optical lithography.

Since the mid-1970s, projection imaging has been the dominant approach to semiconductor lithography, where a master pattern recorded on a photomask is projected by a sophisticated lens system onto a photoresist-coated wafer. Since optical professionals have always been involved in the design, fabrication, and use of these lithography systems, lithography has always found a home within the SPIE community.

Our first conference was in 1976 (Developments in Semiconductor Microlithography, SPIE Proceedings Volume 80), with 26 papers on projection lithography systems, mask making, and metrology.

More than 40 years later, the SPIE Advanced Lithography symposium attracts over 2000 lithographers from around the world to San Jose, CA (USA) each year, and it remains the premier event on the lithographer’s calendar.

About 25 years after that first conference, SPIE decided to recognize the importance of microlithography to the SPIE community by establishing an award for microlithography. This is a brief history of that award.

Frits Zernike (1888 – 1966) is most famous for his invention of the phase contrast microscope, for which he won the Nobel Prize in Physics in 1953. But his use of (now named) Zernike polynomials to describe aberrations in a circular lens is possibly more famous in the optics community than his Nobel.

After finding the original Zernike article on the topic in a 1934 Dutch physics journal Physica, the next step was to look for an English translation. A Zernike article with exactly the same title (in English) was published in the Monthly Notices of the Royal Astronomical Society. A closer look, however, revealed that this was an abridged and somewhat complementary version of his Physica paper.

This was when Tony contacted Frits Zernike Jr., son of the Nobel laureate and by then a retired physicist who had spent his career in optics and microlithography. Frits quickly confirmed that no English translation had ever been made of the article in Physica.

Tony took on the task as an after-hours effort, resulting in a draft version some months later that circulated among a small group of lithographer colleagues and friends. Burn Lin took a keen interest in this translation and asked that it be submitted for publication to the newly established Journal of Microlithography, Microfabrication, and Microsystems (JM3), of which he was the founding editor-in-chief.

The English version of this important article finally appeared in the July 2002 issue of JM3, some 68 years after it was first published. (See: dx.doi.org/10.1117/1.1488608 in the journal now known as the Journal of Micro/Nanolithography, MEMS, and MOEMS.)

In the fall of 2002, SPIE decided to establish an annual award for people who made significant contributions in the field of microlithography. Chris Mack was asked by SPIE to chair the selection subcommittee for this award, and Tony Yen became one of the committee members.

As most other SPIE awards had a famous name attached, Tony immediately thought of Frits Zernike.

Lithographers owe much to Zernike’s many original ideas on optical imaging, such as partial coherence and phase contrast, and of course the ubiquitous circle polynomials he invented to describe aberrations.

Chris was very receptive to the idea and went to SPIE to seek approval for the name change while Tony approached Zernike’s heirs for permission to use his name.

In the spring of 2003, Tony invited Frits and his wife, Barbara, to dinner and brought up the idea. Frits’ reaction was positive, but he had to check with his sister living in The Netherlands. Shortly afterwards, he wrote that his sister was happy with the naming, and permission was granted.

Now in its 14th year, the Frits Zernike Award for Microlithography continues to honor a legend in optics as well as lithographers who have made significant contributions to advancing Moore’s law, many of whom used Zernike’s original ideas.

We are happy that we had an opportunity to have a small part in making this happen.

Note: Frits Zernike Jr., who was well known and respected in the lithography community, passed away in 2011. Comparing himself to his father and demonstrating his usual modesty, he said, “My father was good with both his brain and his hands; I only inherited the hand part.”

–SPIE Fellow Anthony Yen is head of the lithography equipment and mask technology division at Taiwan Semiconductor Manufacturing Co. He is a past chair of SPIE Advanced Lithography and holds a BSEE degree from Purdue University (USA) and SM, EE, PhD, and MBA degrees from Massachusetts Institute of Technology (USA).

–SPIE Fellow Chris A. Mack is a semiconductor microlithography consultant and editor-in-chief of the Journal of Micro/Nanolithography, MEMS, and MOEMS (JM3). He holds a BS from Rose-Hulman Institute of Technology, an MS from University of Maryland, and a PhD from University of Texas at Austin (USA). 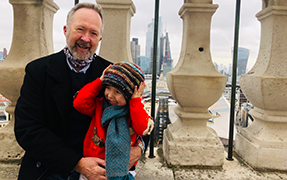 Publishing Research and Getting Involved with SPIE