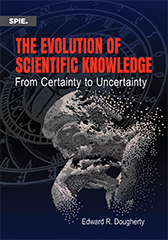 Today’s major scientific and engineering problems — in biology, medicine, environmental science, etc. — involve enormous complexity. Scientists desire to model systems with thousands of variables and parameters; however, this complexity runs up against the requirements for scientific knowledge, which are governed by its epistemology.

This cannot be ignored. In the words of Albert Einstein, “Science without epistemology is — insofar as it is thinkable at all — primitive and muddled.”

The essential problem confronting complex systems is that models can no longer be treated as certain, with the comforting thought that even if slightly off, they can provide sound predictions for future observations and therefore can be validated and applied based on the accuracy of their predictions. Extreme complexity leaves us with significant uncertainty, in the sense that the best one can hope for is to construct an uncertainty class of models containing the unknown “true” model.

Because these issues are prevalent across many disciplines, it is imperative that scientists and engineers possess a solid understanding of the foundations of scientific knowledge. The situation is akin to that in the first part of the 20th century when quantum theory forced scientists to rethink the meaning of science.

Today’s challenge may even be greater because, whereas quantum mechanical principles proved to be statistically testable, the testability of large-scale systems is in question.

My interest in this epistemological quandary began in the early days of genomics with the classification of cancer via genomic markers and the building of gene regulatory networks. The scale of the problems led me to study the statistical issues, which ultimately led to epistemology.

I started teaching a course on the foundations of translational genomics, which resulted in the book Epistemology of the Cell, with my coauthor Michael Bittner, a cancer biologist.

It became apparent to me that there was interest among scientists and engineers in the challenge of complexity, but I repeatedly heard that their education had ignored epistemology. In 2015, I attended a small workshop on validation of complex systems in Germany and realized the issue was ubiquitous, across science, economics, engineering, and social science. On the flight home, I decided to write this book, The Evolution of Scientific Knowledge: From Certainty to Uncertainty.

The book consists of two parts. The first is a history of scientific epistemology from Aristotle, through the radical transition from ancient to modern science brought about by Bacon, Galileo, and Newton in the 17th century, and then the full flowering of the mathematical-empirical duality in the quantum mechanical thinking of Bohr, Heisenberg, and Schrödinger.

This background/history is fundamental to appreciating the twofold problem the book ultimately addresses in the second part:

For the latter, it proposes a course of action based on integrating existing partial knowledge with limited data to arrive at an optimal operation on some system, where optimality is conditioned on the uncertainty regarding the system.

SPIE Press published Dougherty’s book, The Evolution of Scientific Knowledge: From Certainty to Uncertainty, in late 2016. It is available as a free ebook and for purchase in softcover.

–SPIE Fellow Edward R. Dougherty is the scientific director of the Center for Bioinformatics and Genomic Systems Engineering and the Robert M. Kennedy ‘26 chair of the Department of Electrical and Computer Engineering at Texas A&M University (USA). He holds a PhD in mathematics from Rutgers University (USA) and an honorary doctorate from Tampere University of Technology (Finland).