The Photonics of Star Trek

Celebrating 50 years of imagination that has come true.

Fifty years after Gene Roddenberry launched the Star Trek series on American television, many of the “fictitious,” futuristic devices and ideas on the award-winning show have become commonplace on Earth.

From photodynamic therapy to laser weapons to handheld sensors and communication devices, the next pages provide a look at some photonics-enabled ideas and props from the original show (1966–69) that visionary scientists and engineers have turned into reality.

The Star Trek replicator was a machine that synthesized food, water, and other provisions on demand.

Today, one popular 3D printer is based on stereolithography, a solid-imaging technology for which Chuck Hull received a patent in 1986, 20 years after the original Star Trek series debuted. Hull’s company, 3D Systems, now sells printers on the consumer market that can produce 3D objects with light, and GE uses laser-powered 3D printers to create jet-engine fuel nozzles and other complex components.

There’s even a “replicator” in space now. In September 2014, a 3D printer from the company Made in Space was delivered to the International Space Station (ISS) to test the effects of microgravity on 3D printing. The company recently partnered with Lowe’s Innovation Labs to bring tools and technology to astronauts in space with a next-generation commercial 3D printer for the ISS. See the SPIE Newsroom video at spie.org/3Dspace. 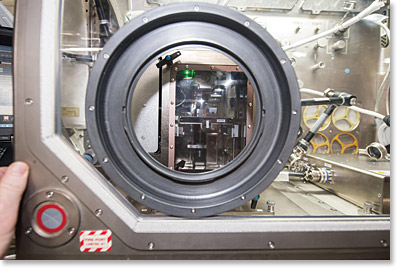 The 3D printer being tested on the ISS is helping to demonstrate additive manufacturing technology in zero gravity.
Image courtesy NASA

Another company, Natural Machines in Barcelona (Spain) is developing a 3D food printer, and NASA has funded a project to develop a technology to print food in space during long missions.

One device, made by New York-based MakerBot, is even called a Replicator, which is the beginning of a whole new manufacturing paradigm that was envisioned on Star Trek. 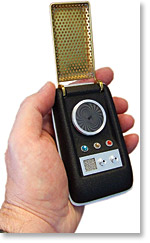 In the original TV series, Captain Kirk and other crew members flipped open their personal communicators to speak to someone elsewhere on the starship or on a planet below.

Motorola engineer Martin Cooper, who invented the first mobile phone, told Time Magazine that his invention was inspired by the Star Trek communicator (at left).

Today, however, many people consider the flip phone an antiquated voice communication device. Modern “communicators” are photonics devices with displays, lenses, cameras, and more. In addition, lasers are used to make the processors, cases, and batteries for smart phones and to mark the serial number on each device. 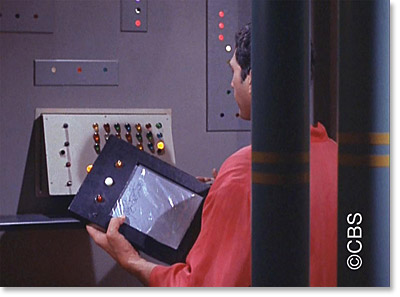 In the fictional Star Trek of the 22nd century, the USS Enterprise crew frequently used personal access display devices, or smart PADDs, to review information and approve requests. The handheld devices with touch screens and stylus that Roddenberry imagined 50 years ago (shown above) are virtually the same as today’s iPads, Kindles, and Android tablets.

Scanners on the Enterprise could detect atmospheric chemistry and presence of water on faraway planets, and even count life forms, all of which are possible today via satellites or aircraft equipped with photonics sensors.

In 2016, the European Space Agency will launch a spacecraft equipped with such sensors, created by optical engineers to search Mars for “evidence of methane and other trace atmospheric gases that could be signatures of active biological or geological processes,” using two infrared and one ultraviolet spectrometer. 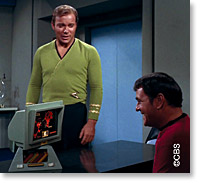 From the bridge, the crew of the Enterprise viewed space via large, digital flat-screen displays, with full-duplex conversations with Starfleet command and aliens alike. Now, large displays are ubiquitous around the world, and tools such as Cisco TelePresence, Skype, and Apple’s FaceTime enable worldwide video conversations.

The Star Trek tricorder (a TRI-function reCORDER) was a black rectangular device with a shoulder strap that had three functions, to scan a person or unfamiliar area, record technical data, and analyze that data.

Handheld spectroscopic sensors on the market today reveal chemical and biological signs in nearby samples, and similar tools can track a person’s vital signs and diagnose health conditions.

In January, Qualcomm is expected to announce the winner of the Tricorder XPRIZE, a $10 million global competition to develop a consumer-friendly device capable of diagnosing 15 medical conditions and capturing metrics for health. Let’s call that an excellent prediction!

Metamaterials have been demonstrated to effectively cloak objects by manipulating the paths traversed by light through a novel optical material, demonstrating the basic physics used to make Romulan and Klingon spacecraft invisible in Star Trek.

Many optics and photonics researchers are developing invisibility cloaks today with materials that are engineered to have properties not normally found in nature. These metamaterials can direct and control the propagation and transmission of light in various frequencies to shield an object from view.

Sir John Pendry of Imperial College is one of the real-life pioneers of invisibility cloaking with negative-refractive-index metamaterials, and many others report on their research at various SPIE conferences on metamaterials and plasmonics.

Researchers led by physicist Félix Bussières demonstrated quantum entanglement of photons in a 2014 paper published in Nature Photonics. Their results showed that information could be effectively teleported from one location to another at the speed of light.

No biological materials or other bits were transported, “just” quantum qubits. But it is a start on the long path toward the fictional human transporter depicted in Star Trek!

Today’s optical tweezers are essentially miniature tractor beams, which can be seen in labs around the world, albeit at a small scale, moving nanoparticles, atoms, or cells using lasers.

You can call our ability to move matter with optical tweezers today a working demonstration of the tractor beam concept, which could quite possibly be scaled up over the next 100 years.

Armed with a phaser (likely an acronym for a photon maser), the crew of the Enterprise could stun or disable an adversary with a coherent beam of light or temporarily turn a rock into a radiant heater.

In the real-world 21st century, the US Navy has demonstrated the effectiveness of directed-energy weapons to disable targets such as missiles and unmanned aerial vehicles (UAVs). Military-grade laser weapons using arrays of solid-state lasers have also been used in exercises at sea to ignite a pirate’s outboard motor.

The Directed Energy Solar Targeting of Asteroids and exploRation (DE-STAR) system proposed by Philip Lubin (right) from University of California, Santa Barbara, is a solar-powered, modular-phased array of lasers designed to protect Earth from possibly threatening space objects like asteroids by evaporating them with laser heat or altering their path before they hit our planet.

The US Air Force Research Lab’s Directed Energy Directorate has created smaller directed-energy devices that are non-lethal and portable such as the personnel halting and stimulation response rifle, or PHASR. Today’s troops can now use a dazzler, which uses visible light or lasers that heat a person’s skin to dissuade potential attackers. These dazzlers are akin to a Star Trek phaser on stun.

Photon torpedoes, as imagined on Star Trek, contain matter/antimatter and can travel faster than the speed of light. These are still purely science fiction.

In the original TV series, “Bones,” Star Trek’s chief medical officer, and other “sick bay” staff used light for surgery, wound care, accelerated bone healing, and as a “dermal regenerator,” all of which will be discussed at SPIE BiOS in February.

Lasers and specific wavelengths of light are used today to help skin heal faster, for aesthetic treatments, dentistry, and eye surgery. Transcranial near-infrared laser therapy (NILT) has also been used to reduce the severity of stroke. Complex skin cancers have been treated at University of Lund (Sweden) and elsewhere using light-activated (photodynamic) medicine.

Theoretical physicist Stephen Hawking once wrote that science fiction such as Star Trek “is not only good fun but it also serves a serious purpose, that of expanding the human imagination.”

SPIE suspects that more than a few scientific leaders attending Photonics West each year were inspired by the TV series and Star Trek films to pursue science and engineering.

So, the welcome reception at Photonics West, 15 February in San Francisco, CA (USA), will celebrate the 50th anniversary of the original Star Trek TV series.

The reception is open to all registered conference attendees.

WHAT FUELED YOUR DREAMS?

If you know of other light-based technologies that evolved from Star Trek science fiction, especially ones that predicted a serious purpose today or inspired you to pursue a career in science and engineering, beam it to innovation@spie.org for possible inclusion in a future article or blog post.

–Peter Hallett is director of marketing and industry relations at SPIE and a Star Trek enthusiast.