Can we save energy and see the night sky?
01 January 2016
Mark Crawford

Nighttime light pollution, the sky glow from streetlights and other outdoor lighting that can limit visibility of the stars and the Milky Way, is growing at about 6% a year, and a big contributor is the well-intentioned trend to replace energy-consuming streetlights with brighter and whiter energy-saving LEDs.

The International Dark-Sky Association (IDA), a US-based not-for-profit trying to preserve and protect the night-time environment through environmentally responsible outdoor lighting, says the trend away from high-pressure “yellow” sodium lamps and toward broad-spectrum, blue-white LEDs for outdoor lighting is disturbing.

“The steady global conversion to white LED lighting, especially for streets, is the biggest problem we have confronted in the 27-year existence of the Dark Sky Association,” says John Barentine, project manager for the IDA. “This now puts us in the awkward position of opposing a brand-new lighting technology that promises substantially lower electricity use and cost savings. But this new technology also brings the potential of making light pollution much worse, even if the new lighting is properly shielded.” 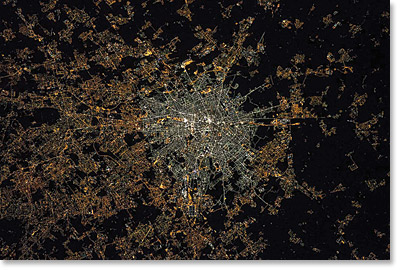 Astronaut Samantha Cristoforetti took this image of Milan after the city center’s transition to LED technology. The illumination levels appear similar or even brighter in the center than the suburbs, which is not surprising, but the amount of blue light is much higher.
NASA/ESA photo
THE PROBLEM WITH LEDS

Much of the backscattered radiation in Earth’s atmosphere comes from two major sources of outdoor lighting: high-pressure sodium (HPS) lights and 6500K “cool-white” LEDs. HPS is dominated by long-wavelength light while 6500K LED is dominated by a narrow, short-wavelength emission band together with a broader long-wavelength emission band, says Mark Rea, director of the Lighting Research Center at Rensselaer Polytechnic Institute (USA).

The problem is that the strong blue content of the white light in municipal LED installations scatters much more efficiently through Earth’s atmosphere, compared to other colors.

Several studies, as well as photos taken by astronauts on the International Space Station, have confirmed that sky glow is the result of scattered light from streetlights and buildings. Barentine also notes that computer modeling suggests that, “when matched for the same total output of light, converting city lighting systems to white LED has the potential to significantly increase sky glow over cities.” 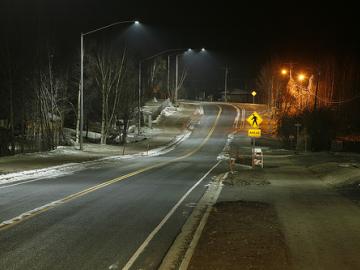 Solving LED light pollution isn’t so much a technical issue as a social one. People have a tendency to use more of something, not less, when it becomes cheaper to produce. Although LED is a more energy-efficient technology, lowering the cost of producing light is not expected to reduce light use or even maintain current use levels.

“Rather, we expect cities to light more because for the same dollar cost, they can operate significantly more fixtures,” Barentine says.

Some knowledge of optical science would go a long way to controlling light pollution.

Public works managers might consider atmospheric conditions when installing LEDs into streetlights. Some cities are better suited for LED lighting than others, based on moisture content of the air. When air is dry and clear, light scatters more easily — especially the short-wave radiation from LEDs, creating more sky glow and glare.

“It is well known that the magnitude of sky glow on a clear night depends upon the aerosol content in the atmosphere and the spectral power distribution,” Rea says. “Sources with a greater proportion of short-wavelength radiation produce more backscattered radiation, but as aerosol density increases, the differential effect of spectrum becomes smaller.”

Therefore, LED light trespass and glare are not as much of a problem in Ireland, where there is plenty moisture in the air, compared to Arizona in the US Southwest, where the impact of LED lighting is more significant.

For more on LEDs and light pollution, read the full article in the SPIE Newsroom: spie.org/LEDskyglow