The Extreme Light Infrastructure (ELI) Beamlines laser facility near Prague (Czech Republic), the first of four European laser centers to be built under the ELI project, was officially opened in October.

The Beamlines Center will house some of the world’s most powerful lasers, with intensities 10 times higher than those currently achievable elsewhere. With the first user operation set to begin in 2018, it will operate as an international facility for molecular, biomedical, and material science research and the study of the physics of dense plasmas, warm dense matter, and laboratory astrophysics.

“Our vision is to make it the CERN of laser research,” said Wolfgang Sandner, director general of the ELI Delivery Consortium (ELI-DC) International Association, referring to the European Organization for Nuclear Research that operates the Large Hadron Collider and other particle detectors.

Sandner, who died in early December, had coordinated the facility’s implementation phase and was among a number of scientific and political dignitaries at the Beamlines building inauguration. They included French physicist and founder of ELI Gérard Mourou; Jiří Drahoš, president of the Czech Academy of Sciences; Francesco Sette, director of the European Synchrotron Radiation Facility; and Jan Řídký, director of the Czech Institute of Physics.

Sandner said two other ELI facilities yet to be built, the ELI Attosecond Light Pulse Source Center planned for Hungary and the nuclear physics facility that will be situated in Romania, will “soon be lighthouses on the global map of science.”

The ELI facilities “will become the nucleus of national and regional technology development in one of Europe’s key technologies, optics and photonics,” Sandner said.

The location of ELI’s fourth pillar is still to be decided but it is expected to push the frontiers of laser power into the sub-exawatt regime. 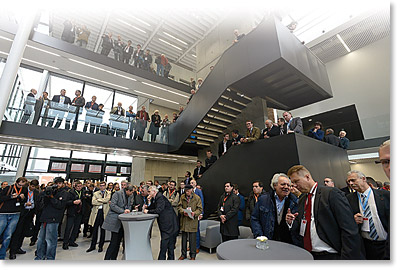 Inauguration at ELI, which will house unique high-power lasers and hundreds of scientists.
Courtesy of ELI Beamlines
HIGH-REPETITION-RATE LASERS

The ELI Beamlines facility consists of four separate buildings on a landscaped research campus for offices and labs, including a massive concrete structure, about the size of a football pitch, for the laser hall.

When completed, ELI Beamlines will develop a high-energy, high repetition-rate laser providing pulses from the four laser systems. To meet the requirement for high repetition rates, three of these lasers will employ state-of-the-art technologies of diode-pumped solid-state lasers (DPSSL) for driving broadband amplifiers. The fourth, a multi-kilojoule laser, will use a newly developed flash-lamp technology with an actively cooled gain medium.

In addition to making important contributions to cancer diagnosis and therapy, scientists at ELI will also conduct experiments involving ion and electron accelerations.

The center will use its lasers, with focused intensities of about 10²³ W/cm2, for high-field physics experiments such as investigating exotic plasma physics and nonlinear quantum electrodynamics (QED) effects, said Zdislava Lojdová, communications manager at ELI Beamlines.

In a presentation at SPIE Optics + Optoelectronics last April, Georg Korn of the Czech Institute of Physics detailed how the seven experimental stations and six multipurpose stations for the four beamlines would have capabilities for investigating x-ray diffraction, phase-contrast imaging, and fluorescence studies. 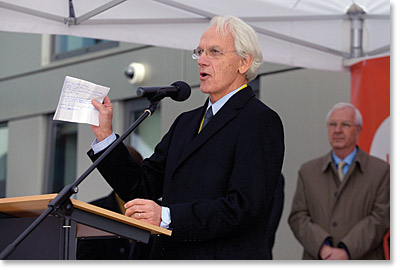 Several world records have already been broken during the development of the laser systems. “The laser system 3, which we are building together with the US Lawrence Livermore National Laboratory (LLNL), uses the brightest laser diodes that have been ever made in the world,” said Bedřich Rus, chief scientist at ELI.

Major technological development activities are the P3 chamber, which is the largest experimental chamber for civil and academic research of laser plasma in the world, as well as the delivery of the high-order harmonic generation (HHG) device. The HHG generates ultrashort coherent pulses of XUV radiation for material research and applications in biomolecular sciences, such as for imaging of biological samples with high temporal and spatial resolution.

Editor's Note: At press time, we learned of the sudden death 5 December of Wolfgang Sandner, director general of the ELI-DC.

"This is a big loss for our community," said SPIE CEO Eugene Arthurs. "Not only was he a top-notch scientist but he had remarkable international diplomatic and organizational skills. His work leading LaserLab Europe was a major contribution to advancing the laser, and his dedication to the success of the ambitious ELI was extraordinary. It is tragic that we lost him, and so soon after the opening of the Beamlines."

For more on Sandner, visit spie.org/sandner.

For more information on the ELI Beamlines Center, visit www.eli-beams.eu