Career transition can be a breeze.

Moving from a small research team at a European prime defense contractor to the UK’s national meteorological service seemed like a radical job change when I made the move a few years ago. Swapping photonics R&D for building relationships between the Met Office and its international defense partners looked like a sideways career move that would take me away from photonics.

However, nothing could be further from the truth.

My role today, at the world’s oldest meteorological service, is to bridge the gap between the needs of defense personnel who use infrared sensors to plan missions and the capabilities of the Met Office to predict the impacts of the weather on those sensors. In doing so, my knowledge of photonics aids the decision making of people who exploit such sensors for military and civilian applications.

Much of my role involves convincing researchers in labs at partner governments that the weather is an important aspect to be considered from the outset, during design stages. My first-hand experience of their industry allows for an easy dialogue, and my initial lack of formal meteorological training is actually an advantage, as I can alert the sensor engineers to issues that I had encountered myself.

At the same time, because I can approach such environmental issues from the perspective of a photonics engineer rather than a meteorologist, I can easily interface between the Met Office’s internal stakeholders in weather forecasting and external collaborators. My ability to articulate the requirements of these photonics engineers means I am well placed to match their needs to the weather forecasting capabilities of the Met Office.

I provide some examples below of projects where I have leveraged my two seemingly separate careers in such a way as to provide an enhanced outcome. Such an approach would have been difficult to instigate without a firm footing in both the defense-photonics and weather-forecasting communities.

As I learned, developing skills in an entirely new scientific field can often involve a steep learning curve. However, it can bring vast benefits to both the engineer in question and to the employer — especially if opportunities to network and collaborate are actively encouraged.

Photonics engineers with diversified backgrounds have many more employment options and opportunities for advancement, especially if they want to remain relatively close to their preferred specialization.

Here are selected top tips from my experience in bringing photonics into what may seem like an unrelated sector:

As a photonics engineer, you’ll bring novel insights and knowledge that can generate new opportunities in your new sector. When and if your lack of experience in the new sector comes to attention, highlight your experience in photonics and show how you could tackle problems from a new perspective.

The diversity that you bring is an advantage because you can explore new ways to solve problems and make otherwise unlikely and revolutionary advances.

Creating new business relationships can be a challenge, at least early on in a new role. But it can be easier if you prepare for occasions when you can show your new colleagues the problem-solving capabilities of photonics.

Be humble in your new field but voracious in consuming the new knowledge that will come your way. Stimulate internal discussion with any novel or interesting links between photonics and the new sector with which you’re engaged. Become a catalyst for ideas and new ways of thinking, especially when planning a project from beginning to end.

One prime example of the Met Office capability to support the defense community is our NEON tactical decision aid (TDA) that I primarily promote to NATO and coalition partners. NEON is a web-based tool for predicting the thermal contrast of land and maritime targets with respect to their local backgrounds. 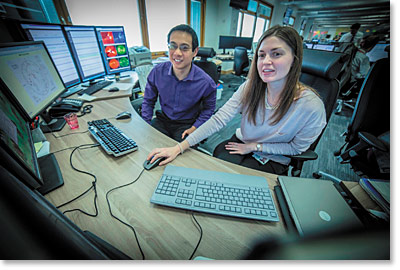 It all starts with the ingestion of over 10 million daily observations by air, land, sea, space, and cyberspace from Met Office assets and those of World Meteorological Organization (WMO) partners. These data, combined with the modeling efforts of several hundred scientists at our UK headquarters, allow our supercomputer to generate over 3000 tailored forecasts and briefings per day.

The economic sectors that benefit from our forecasts range from traditional transportation industries (road, rail, air, and maritime) to new areas such as reinsurance and derivatives, plus supermarkets and renewable energy companies. Our new 24/7 Space Weather Operations Centre is also stimulating interest across many areas related to critical infrastructure, such as power grids, communications, and GPS-time-stamped financial trading.

The NEON tool takes our global forecasts and applies our models of the atmosphere and target environment to account for weather effects on thermal contrasts across land and maritime domains. The tool can account for moving targets relative to the wind; different viewing angles; and even the effects of a spherical planet on radiative transfer when predicting acquisition ranges.

While aimed at mission planners and aircrew in the defense sector, NEON can also be exploited during detailed real-world sensor testing and trials by civilian photonics engineers in many sectors. More effort has gone into validation and verification than into the software development of NEON itself, as assurance is an extremely important factor for defense end-users. 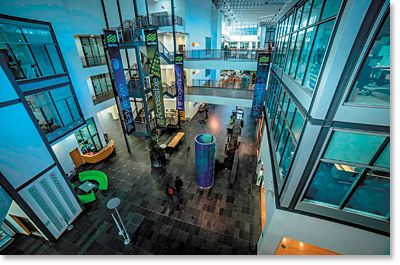 Inside the MET Office.
BETTER THAN ‘AVERAGE’ FORECAST

In order to connect to sensor designers, I needed output that was more simplified (but not simple) than detailed Time +36-hour (T+36) thermal contrast predictions. From discussions at conferences such as SPIE, I deduced a need for representative weather information across certain key regions of interest such as the Middle East. Long-standing “standard” atmospheric profiles were too simplistic for engineers in the early stages of prototype design, but my combined photonics knowledge and increased experience in the meteorological domain allowed me to develop the concept of “Historical-Regional Analysis” (HRA).

HRA takes past observations, or T+0 forecasts, across a region of interest and clusters them in terms of weather classifications (precipitation intensity, visibility limiters, and thermal profiles) and geographical domains (littoral, open-seas, inland, mountainous, etc.). Combining these with statistical processing (guided by meteorologist expertise), we can generate “representative days” of weather for a specific region.

This type of analysis is more rigorous than calculating simple scalar “averages” at a single point in space (and often time) of what is essentially a chaotic, non-linear, and dynamic phenomenon. The result is a meteorologically valid dataset for the testing of sensor concepts.

I hope my experiences have shown it is possible to switch career paths and prosper, leveraging past knowledge to your advantage. It may well be that anyone undertaking such a transition will become the leading authority or “go to” person for photonics within the new home organization, regardless of past position or specific role.

Being valued as an expert and having the opportunity to bridge the gap is ultimately a good thing for you, your employer, and both scientific communities involved.

–Gerald J. Wong is an international defense R&D capability exploitation adviser at the UK Met Office. He earned a doctorate in engineering at Heriot-Watt University (UK) and has master’s degrees in physics and business administration. Wong, a chartered engineer and chartered physicist, is a member of the Institution of Engineering and Technology and the Institute of Physics. He joined the Met Office in late 2013.