Optics and photonics in Canada are at a “tipping point.”

A new report by the Canadian Photonic Industry Consortium (CPIC) says the optics and photonics community in Canada is at a “tipping point” and should focus its efforts on technology transfer in a few key sectors.

Looking to imitate the Horizon 2020 and AIM Photonics models established in Europe and the USA, respectively, the CPIC report, Light Technologies: A Strategic Economic Asset, states that Canada invests about C$150 million in photonics research and development centers and universities annually, employing around 1000 researchers.

However, “There is little to no coordination of efforts to focus photonics on sectors of strategic importance to the country,” said CPIC President and SPIE member Robert Corriveau. The report, he noted, says that photonics research in Canada is often “untargeted,” and that “translation of the outcomes into commercial success must be increased.”

Among five recommendations in the report – which range from calls for more engagement with educators and end users to an expansion of the existing cluster model in Canada – is a recognition that technology transfer between the academic and industrial sectors is inadequate.

“We recommend establishing programs that encourage stronger participation and leadership from industrial and university partners,” the CPIC report says. 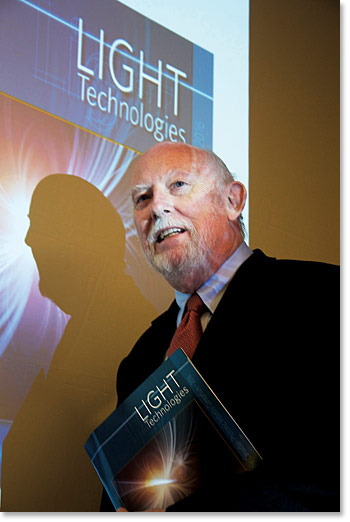 CPIC chairman Douglas James officially released the report at the photonics cluster reception in San Francisco during Photonics West in February. SPIE was a major supporter of the study.

According to the report, the approximately 400 photonics companies based in Canada are mostly small- and medium-sized enterprises and startups, employ more than 25,000 people, and collectively generate close to C$4.6 billion annually.

“Most of these companies are sub-system or system-level integrators of photonics components,” the report says. “Imports of photonic goods reached C$6.4 billion in 2015, indicating the increased potential for today’s Canadian domestic photonics industry.” The photonics industry in Canada has a current average growth rate of 10% annually.

Pointing out that Canada’s investment in photonics is “broad-brush and relatively unfocused,” CPIC would like to see a photonics strategy group established. Its role would be to focus investment on a few key sectors judged to be of global significance during the next 10 years, and where Canada has the photonics skills to make a difference.

“During the past 20 years, Canadian industry has evolved from not knowing what photonics was, to realizing that photonics pervades all aspects of our society,” CPIC says. “Consequently, the Canadian photonics sector has reached a tipping point: It can maintain the status quo or pursue all opportunities to play an important role in the future of both Canadian and global photonics development and manufacture.”