Massive Reach of Year of Light

The continuation of the International Year of Light and Light-based Technologies (IYL) into 2016 means that a final tally of thousands of activities promoting awareness about optics and photonics on behalf of IYL won’t be known until the end of this year or later.

SPIE member John Dudley, chair of the IYL 2015 Steering Committee, says there may possibly be 10,000 scientific conferences, exhibitions, workshops, and festivals attributed to the UNESCO-sponsored initiative for 2015 when final reports are in.

Dudley announced at the IYL closing ceremonies in February that reports received up to that point showed that IYL generated about 6000 activities in 148 countries. High-level media presence included 15,000 media mentions from 4500 sources, and social-media activity logged 4 million impressions on Twitter alone, including 3500 tweets.

“Just like light, the International Year of Light has touched all continents,” he said. “The messages and movement that the IYL has created will continue in 2016 and years to come.”

Indeed, the IYL committee in France and LIGHT2015, a European-Union-funded project, have extended their activities through June.

Whatever the IYL impact number turns out to be, Dudley said in an interview, “we can safely assume that the International Year of Light has reached tens of millions of people. There have been all sorts of events that even the local country organizers haven’t got to see, from Europe, to the Philippines, to Africa, and beyond.”

SPIE President Robert Lieberman, SPIE Immediate Past President Toyohiko Yatagai, and other SPIE leaders joined with other founding partners and sponsors of the IYL, Nobel laureates, diplomats, industry leaders, and members of the international and scientific and arts communities for three days of IYL closing ceremonies in Mérida, Mexico. 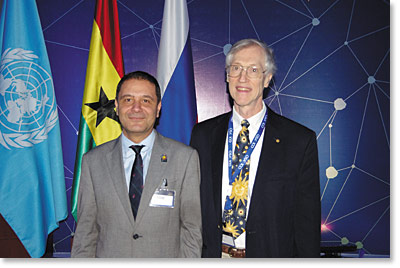 In addition to Dudley, SPIE member Ana María Cetto, chair of the IYL National Committee in Mexico and a professor at Universidad Nacional Autónoma, praised the efforts of the many partners, sponsors, and supporters who contributed to the observance. “IYL was like a big concert and everyone played their part beautifully,” she said.

Referring to the nearby Mayan archeological site of Chichén Itzá, Cetto noted that the ceremonies did not imply an ending. “As the Mayas with their calendar, it is just the ending of one cycle and the beginning of another,” she said.

Presentations at the Mérida ceremonies included lectures from Nobel Laureates Shuji Nakamura of University of California, Santa Barbara (USA) on the invention of high-efficiency blue LEDs and the future of lighting, and John Mather from the NASA Goddard Space Flight Center on what astronomy learns about the universe by looking back in time via light.

“We are here because of exploding stars,” said Mather, an SPIE Fellow. “We are made of oxygen, nitrogen, and carbon, other than hydrogen and helium — so thank you, exploding stars!”

Other speakers spoke on the role and scope of IYL education and outreach; described how light in life sciences helps diagnose and heal disease; and showed how lighting design in public spaces can improve safety, productivity, and even health.

Mourad Zghal, an SPIE Fellow from University of Carthage (Tunisia) noted the importance of IYL outreach programs in Africa, where the creation of scientific societies in optics and photonics has reinforced and encouraged linkages with industry. 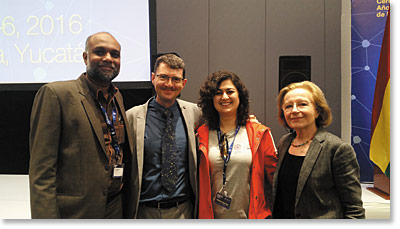 Other SPIE Fellows speaking at the event were Vasudevan (Vengu) Lakshminarayanan of University of Waterloo (Canada), Andrew Forbes of the CSIR National Laser Centre and University of Witwatersrand (South Africa), and Japan Society of Applied Physics President Satoshi Kawata of Osaka University. SPIE members who spoke at the event included Sir David Payne, director of the Optoelectronics Research Center (ORC) at University of Southampton (UK), and Harry Atwater of the California Institute of Technology (USA).

Lieberman was among those celebrating how the IYL enabled connections among scientists, engineers, artists, educators, students, and researchers in many fields.

We are really looking forward to continuing these relationships,” Lieberman said. 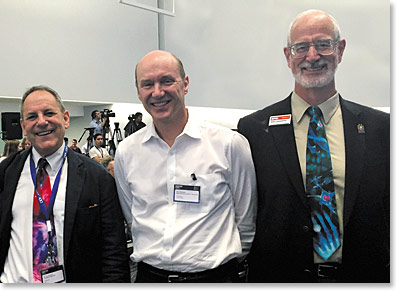 Among the presentations during the closing ceremony, Dudley and Payne presented the Universal Declaration of Human Rights (UDHR), encoded to 5D data storage, to Jean-Paul Ngome Abiaga on behalf of the Natural Sciences Sector of UNESCO.

“UNESCO’s International Year of Light has increased global public and political understanding of the central role of light in enhancing the human experience,” Payne said. “We felt the gift document, encoded into a technology that is the epitome of the messaging for the IYL, promoting sustainable development, education, and communication, is a unique way to enshrine the declaration.”

Payne and other researchers at the ORC have created a way to store immense quantities of data for millennia, and perhaps virtually forever, using glass nanostructured with ultrashort light pulses.

“To see the Universal Declaration of Human Rights preserved in this form of infinite storage takes us into a new realm of understanding the role of light for the future of global society,” Dudley said.

Dudley was also the recipient of the “Ibn Al-Haytham Award for Public Engagement with Science” on behalf of 1001 Inventions, an IYL founding partner, and the IYL community.

He said the advancement of 5D data storage technology and applications was a highlight of the year as was the major recognition of the achievements of Al-Haytham, the renowned 11th century scientist considered by many to be the “Father of Optics.”

Amid all of the promotion of light-related solutions to societal problems, Dudley said the IYL also achieved serious traction at a political level. In addition to conducting outreach all over the globe during 2015, Dudley spoke at many major scientific-political events, notably the executive board at UNESCO’s headquarters, which represents about 20 countries. Luminaries he has connected with include physics Nobel Laureates Bill Phillips (1997) and Hiroshi Amano (2014) – in the company of many leading politicians.

“One of my aims has been to bring hardcore science into the political arena,” he said. “I believe it has been a success that we will see more interaction between politicians and scientists.”

One of the key issues has been bridging the language gap so that politicians and scientists can better understand each other.

As an example, Dudley said: “Consider the word theory. In science [this] is a model used to describe reality. But to a politician, a theory is something that is not proven.

“To a scientist,” he continued, “evidence is something that is fact, confirming a theory, while to a politician, evidence can be an argument that may or may not be true.”

Because of IYL, “There are now thousands of politicians worldwide who have seen talks by [SPIE CEO] Eugene Arthurs, myself, or other IYL speakers who have made people aware of such vocabulary differences and the need, very early in the conversation with politicians, to be unambiguous about what you mean.

“Politicians, in my experience, are far more receptive to clear opinions than you might think — if you have good arguments to back them and if you give them easy take-aways,” Dudley said.

AN END TO LIGHT POVERTY?

Another major objective of IYL was raising awareness of light poverty and putting the issue on the world’s agenda. Dudley said the IYL provided numerous opportunities to show how the absence of lighting and energy infrastructure in many parts of the world is a real but solvable problem.

For example, “We spend billions trying to address the consequences caused by poverty,” Dudley said, “but we spend very little on the things that could stop it altogether,” such as providing consistent access to lighting and electricity in the developing world.

“When you consider that allowing young people to learn about the world for themselves – democratizing education is so important and is not possible without light at home – then we have to solve the problem of providing access to reliable lighting for them.”

The IYL was used as a progress lever for the UN’s 2011 Sustainable Energy for All initiative, he said. The program involves multinational non-governmental organizations and lighting manufacturers such as Osram, Siemens, and Philips. “This group is lobbying to reduce light poverty so that, ideally, there will be light for everyone who needs it by 2030,” Dudley said.

Dudley believes that the legacy from IYL will be substantial and long-lasting, especially with younger people and students around the world.

“People who might not otherwise have done so have learned about science and especially photonics,” he said. “We may not see immediate measurable benefits but I am confident that in 10 years, we will see young scientists doing work in this area as a consequence of having seen a presentation in 2015.”

Books produced for the International Year of Light include a children’s book on Ibn al-Haytham, whom many call the “Father of Optics,” and two from SPIE.

National Geographic Kids and 1001 Inventions announced they would publish the book,

Ibn al-Haytham: The Man Who Discovered How We See, as part of the National Geographic Kids Readers Series.

The English language publication, for readers aged 6 to 9, is planned for release in July.

SPIE printed and distributed 25,000 copies of Celebrating Light, 50 Ways Light-based Technologies Enrich Our World in 2015. The volume celebrates 50 applications of light that have made the world a better place.

A second book, Inspired by Light: Reflections from the International Year of Light 2015, was produced by SPIE in concert with the European Physical Society and the International Centre for Theoretical Physics. The collection of 56 blog posts that were originally published on the light2015blog.org website covers light in culture, education, science, and technology with essays that pay homage to the people throughout history who have advanced light-based technologies.

A PDF of that book is available from SPIE.