Supernova explosions are believed to occur once every few centuries. One such event was seen with the naked eye in 1604, and the next observation happened in February 1987 inside a gigantic physics laboratory at Kamioka, Japan, one kilometer under the bedrock of Mount Ikeno.

Kamiokande, the University of Tokyo’s Kamioka Nucleon Decay Experiment, detected neutrinos from supernova 1987A emanating from the Large Magellanic Cloud some 160,000 light years from Earth.

These sub-atomic particles rarely interact with other matter, making them very difficult to detect. In a span of a few seconds, Kamiokande detected 11 out of the estimated 2 x 1058 neutrinos released by the supernova. Although the sample size was miniscule in relation to the enormous number of neutrinos that bombarded Earth from the 1987A, it was remarkable because it was the first time neutrinos from a supernova had been observed.

This very rare event led to a share of the 2002 Nobel Prize in Physics for Masatoshi Koshiba, a professor at the University of Tokyo, and it ushered in the era of neutrino astronomy. 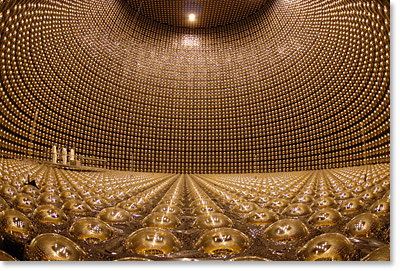 According to quantum theory, particles that transform themselves in this way — “oscillation” — must carry some mass. This proof of neutrino oscillation challenges widely held beliefs about subatomic particles because the Standard Model of particle physics considers neutrinos to have a mass of zero.

The neutrino oscillations were detected by photomultiplier tubes (PMTs), versatile photodetection devices that can quietly scan the universe for single-photoelectron-level clues. Both Kamiokande and Super-K use thousands of 20-inch PMTs to collect very weak light signals, convert them to photoelectrons, and then amplify them so external circuitry can detect them.

Twenty-inch PMTs were unheard of when Koshiba asked Hamamatsu Photonics (Japan) to develop them for use in Kamiokande. It took years of development, factory modifications, and process enhancements to fulfill the ambitious order. When delivered, this was the pinnacle of engineering for a device that has been around since the 1930s.

Today, PMTs are indispensable for neutrino research and other modern-day applications. 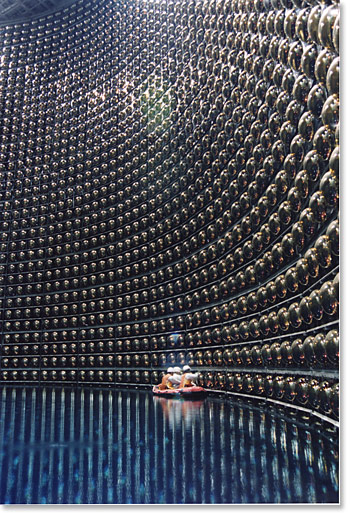 When light strikes the glass of a PMT, it excites electrons in a thin-film photoelectric surface (photocathode) on the inner side of the glass bulb. The electrons are then emitted as photoelectrons into the vacuum tube. A focusing electrode collects the photoelectrons for a secondary electron multiplier made of a series of dynodes (stages). 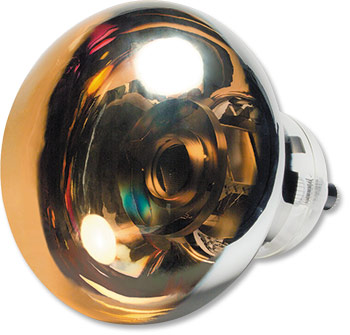 A 20-inch-diameter photomultiplier tube (PMT) for water-Cherenkov observatories such as Super-Kamiokande.

The electric field of the first dynode accelerates the electrons and releases secondary electrons. The process continues for 10 stages or more until there is a sufficient signal to be collected by an anode as a large output current. The ratio of the anode’s output current to the photoelectric current from the photocathode is its current amplification, or “gain.”

Koshiba originally conceived the observatory to study proton decay through Cherenkov radiation experiments. Cherenkov radiation occurs because, in a transparent medium such as water, proton decay or neutrino interactions produce secondary charged particles that sometimes fly outward faster than the speed of light, thus creating a blue flash with a wavelength in the 350nm to 400nm range.

Converting the very weak Cherenkov radiation emissions to electric signals requires the light to be amplified 10 million times. To provide such a high gain and a very wide field of view, the 20-inch PMTs were given 75-mm x 75-mm dynodes arranged in a “venetian blind” configuration.

Water-Cherenkov radiation experiments require a large-scale observatory. In the case of Kamiokande, a tank was filled with 3000 tons of pure water and positioned deep underground to filter out cosmic rays. So Koshiba asked for not only a large detector, but lots of them.

The largest PMT prototypes at the time had a diameter of eight inches, so Hamamatsu Photonics faced a formidable challenge in developing the 20-inch PMTs, which were necessary both to capture as much of the proton decay process as possible and keep signal-processing circuits to a minimum.

The PMTs’ timing was another highly critical specification for Koshiba. Cherenkov light is only emitted in the direction of the elementary particle’s movement, so a PMT needs fast timing response to accurately measure the light emission point and direction. Fast timing performance also helps the PMT separate the Cherenkov light from unwanted background noise.

Koshiba specified a daunting 2ns response-time difference from light input to light measurement, but the vacuum tube’s large diameter was too great to meet the requirement. Also, the original venetian-blind structure suffered from collection inefficiencies for detecting single photons. So the Hamamatsu team continually improved the transit-time difference from each position of the photocathode to the first dynode as well as changed the incident angle of photoelectrons onto the first dynode until they achieved a single photoelectron resolution of 4ns.

By measuring the light signatures captured by the PMTs when a neutrino collides with an electron or an atomic nucleus in the water at the observatory, scientists can determine the type of neutrino that caused the radiation. During the late 1980s, the researchers at Kamiokande noticed that although electron neutrinos arrived at their predicted numbers, only 60% of the expected muon neutrinos were arriving. Kajita’s team considered neutrino oscillation as a possible cause.

After years of data collection, the results revealed that while the expected number of muon neutrinos arrived from above Kamiokande, the number of muon neutrinos that traveled through the earth to arrive from below the detector was just half of the predicted number. Before reporting that neutrinos change their flavors, Kajita waited until a second-generation Kamiokande went online to further validate the data.

Super-Kamiokande began operation in 1996. At approximately 16 times the size of Kamiokande, the Super-K is filled with 50,000 tons of pure water, and the tank wall is covered with more than 11,000 PMTs.

These second-generation 20-inch PMTs have redesigned venetian-blind dynodes with improved time-jitter characteristics down to 2.5ns. Thanks to the Super-K’s extraordinary neutrino data-collection capabilities, Kajita reported the findings in the spring of 1998, and neutrino oscillation has been recognized ever since.

PMTs HAVE DIFFERENT FLAVORS, TOO

Photomultiplier tubes can be employed in a wide array of applications because they can be constructed in many different sizes and packages using diverse bulb shapes, photocathode types, and dynode configurations.

In medical applications, they are found in gamma cameras, positron emission tomography (PET) scanners, and in-vitro assays, among others. Industrial uses include radiation monitoring, oil-well logging, and semiconductor inspection. PMTs are also found in aerospace applications.

Of course, the most typical PMTs are much smaller in diameter. In the medical field, for instance, PET scanners using time-of-flight (TOF) positron annihilation require very fast electron transit times, so PMT bulb diameters are typically only one inch or more with a linear-focused arrangement of much smaller dynodes.

For extremely tight spaces, Micro PMTs measure just a few millimeters in size, and they are at the forefront of the trend toward handheld medical and industrial instruments.

Another highly adaptable characteristic of PMT construction is its photocathode. Several materials can be used for photocathodes, and alkali metals are the most common. Their selection depends on the spectral response needed for the application and the desired work function.

The photocathode in the PMTs at Kamiokande uses a bi-alkaline material that cuts off at the end of the visible spectrum at approximately 650nm. In aerospace applications, however, certain photocathodes, such as cesium telluride (CS-Te) and cesium iodide (CS-I), are used because they can only isolate UV light.

Gain presents another important criterion in PMT selection. High gain, combined with low noise characteristics, helps eliminate the low noise amplifier and its associated cost and complexity in many instrument designs. With up to 12 stages, PMTs can achieve gain figures in the millions.

High-energy physics applications particularly benefit from such high gain, and PMTs are now finding use in leading-edge dark matter experiments in the United States along with water-Cherenkov experiments, like Super-Kamiokande in Japan.

Every day, Super-Kamiokande logs approximately 30 neutrino-related events. These neutrino-detection observations provide magnificent opportunities to expand our knowledge of fundamental physics and of how our universe was formed.

Not only is the photomultiplier tube at the forefront of the most prominent experiments of this type, its versatility also gives it an active role in a wide range of instruments across many industries. Not bad for a device first developed in the 1930s.

How do you follow up major Nobel Prize-worthy breakthroughs in neutrino observation?

Plans are underway for a new, colossal, third-generation detector, Hyper-Kamiokande.

Its active volume will be an order of magnitude larger than today’s Super-Kamiokande detector in order to house up to 99,000 20-inch, high-performance, high-sensitivity photomultiplier tubes (PMTs) in two main tanks.

Hyper-Kamiokande may identify possible effects on the imbalance between matter and anti-matter resulting from charge parity (CP) violation.

It may find a difference between neutrinos and their antiparticles to help determine the order of the three neutrino masses, and it will study cosmic neutrinos from the sun or a supernova explosion to better understand the history of the universe.

Does a proton remain stable forever? Hyper-Kamiokande expects “to be the most sensitive detector for use in proton decay searches in the world,” and its stated aim is to “explore new horizons beyond the Standard Model” (of particle physics). 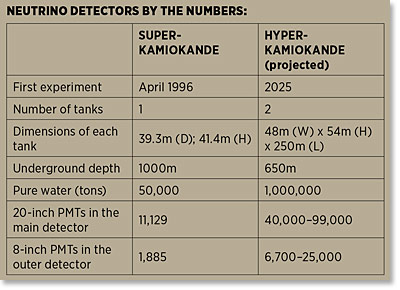 –Chris Warner is a technical writer at Hamamatsu Corp. He previously spent 15 years as a technical editor for Electronic Component News (ECN) where he covered several electronic component categories and vertical markets and served seven years as executive editor.

NOBEL PRIZES, NEUROPHOTONICS, AND THE NPI

PMTs, one of Hamamatsu’s core products, are essential components in a wide variety of scientific, commercial, and medical instruments, and Kajita used them in his research at the Super-Kamiokande neutrino detector facility at the University of Tokyo.

“This win is a tremendous accomplishment for Kajita and Hamamatsu Photonics,” said NPI Photonics Industry Neuroscience Group Chairman Tom Baer, noting that Hamamatsu has played a part in past Nobel-Prize-winning research as well.

The NPI Photonics Industry Neuroscience Group has committed more than $30 million in existing and future R&D spending over the next three years to advance optics and photonics technology in support of the White House Brain Research through Advancing Imaging Neurotechnologies (BRAIN) Initiative. 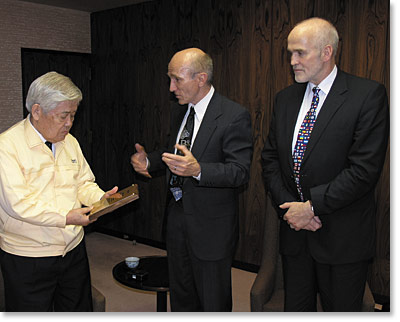 Teruo Hiruma, chairman of the board at Hamamatsu Photonics, received the SPIE Visionary Award in 2006 for his visionary guidance of Hamamatsu Photonics to international recognition as a world-leading supplier of high-quality products to research and industry.

SPIE CEO Eugene G. Arthurs said Hiruma was also recognized for his work in expanding the frontiers of photonics technology and his advocacy for photonics research for the betterment of the human condition.

Hiruma has for many years promoted photonics’ important role in addressing problems facing all of humanity, especially in the fields of energy, environment, healthcare, and communications, he said.

“He has gone way beyond the immediate interests of his company which, consistent with his vision, is strong in these technical areas,” Arthurs said.